Apology? You Can Put It In Writing 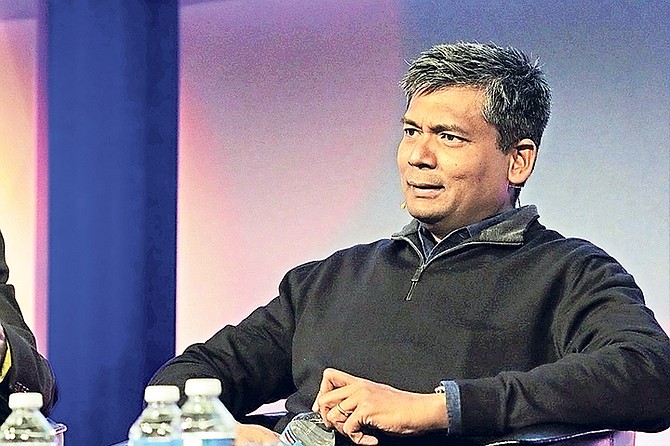 AFTER a harsh rebuke and ridicule over his comments mocking Prime Minister Dr Hubert Minnis and criticising Bahamian workers, Liberty Latin America’s president Balan Nair apologised and explained that his comments were taken out of context.

Dr Minnis told Parliament Mr Nair called him yesterday morning to explain that the remarks he made were never intended to insult the Office of the Prime Minister or the Bahamian people.

To this, Dr Minnis said he told Mr Nair to send formal letters apologising for the remarks.

Dr Minnis spoke about his conversation with Mr Nair after Official Opposition leader Philip “Brave” Davis said he was concerned about it and questioned whether the Liberty executive had been “placed on a stop list” from entering the country. Liberty is the parent company of BTC.

Later, a letter from Mr Nair to Dr Minnis was made public. He wrote that he was “sorry” and did not mean to disrespect the prime minister or Bahamians.

The comments he was referring to were made during an internal staff meeting in Jamaica last week and were captured on videos that have since gone viral. In the clips, Mr Nair says the difference between BTC and its Jamaican counterpart, Flow, was “night and day”.

He also joked that Dr Minnis could not look LiLAC officials in the eye while calling for more Bahamians to be employed at the company.

“I know that some video is going around,” Dr Minnis said. “The video is not as what had taken place.

“The CEO Balan who you’re talking about called me on my cell and he apologised for - if the Office of the Prime Minister was insulted. That was never his intention.

“He apologised to the Bahamian people if that was the interpretation that was never his intent. I told him, (and) this was a communication early this morning, I think it would be fair and wise if he would send an official letter of apology both to the Office of the Prime Minister and the people of the Bahamas.

“Exactly what transpired and why things were done in Jamaica, Mr Speaker, I know he explained to me but I don’t think I am at liberty to disclose that information to the public. But we can expect an official letter of apology from Liberty both to the Office of the Prime Minister and the Bahamian populace.”

Dr Minnis then referred to a meeting last week with Liberty and BTC officials in which he told them he found it insulting that there were plans to move the company’s call centre from New Providence to Guyana.

“I would not want misinformation to remain on the records of the House of Assembly,” Dr Minnis said. “I had a meeting with the executives of BTC/Liberty about a week ago or the latter part of last week. It was a very cordial meeting.

“I informed them that the government would not tolerate the removal of the call centre from Nassau to Guyana because I found it very insulting.

“I called Scotiabank some time ago, (the) latter part of last year I think and was asking for a particular individual only to hear at the other end of the phone a foreign voice. There was a communication thereafter between myself and that foreign voice somewhere in the Caribbean answering for Scotiabank and I was most insulted.

“In the Bahamas, we have personal relationships with our banking sector and other industry elements within the Bahamas and I am most insulted when calling a particular entity and the phone is being answered by some foreigner.

“The government was (also) very upset with information that we are receiving that senior officials within BTC are being replaced for a foreign entity. That is most concerning and there was some rumour that individuals were being cherry picked and that is not done in the Bahamas. The remainder of the meeting I would not go into (but) those matters were resolved.”

Mr Nair’s July 17 letter said he looked forward to putting the incident behind all involved and building a better BTC.

“First and foremost, I would like to apologise for the remarks I made and the unintended consequences that have arisen as a result of my comments,” he wrote. “The message I was trying to convey did not come across appropriately, have hurt many feelings and for that I am sorry. I meant no disrespect to the prime minister, his office or the citizens of the Bahamas. I look forward to putting this incident behind us and building a better BTC for its employees and for the Bahamas.”

He further thanked Dr Minnis for meeting him and colleagues on July 8 when many topics were discussed that affected local business.

Mr Nair continued: “I emphasise that we are excited about the business prospects for BTC and are committed to the company. As we discussed we are also looking to invest in improving networks across the region and we will certainly look at the Bahamas as one of those markets to enhance and extend our network. We believe in our employees, the Bahamas and we know there is a bright future ahead.

“I appreciate the relationship we have developed and our collaboration with the board of directors of BTC has been constructive as we work together on recent initiatives. My sincere hope is that we can continue to work together in a meaningful way to ensure that BTC can reach its potential and meaningfully contribute to the Bahamas.”

“Let me reiterate my apologies to you, your office and the people of the Bahamas. I also want to thank you again for your time last week and look forward to our next meeting,” the letter said.

Mr Nair also released a statement to BTC staff in which he acknowledged the comments were insensitive, adding he felt remorse. He said he “believed” in BTC and the aspirations of Bahamians.

Ahead of this apology, Mr Davis said it was only acceptable for Bahamians to criticise their prime minister and government, but not for foreigners to do so.

“I am very concerned, the member for Killarney is my prime minister,” the Cat Island, Rum Cay and San Salvador MP said. “I recognise it.

“The question I have I am wondering whether this person, Balan Nair of BTC/Liberty, who mocked the prime minister and was so derisive in a social media video that was circulated, whether he is in the country, whether he has been put on a stop list.”

He then referred to a situation in the early 1970s in which outspoken FNM supporter Theo “FNM” Farquharson allegedly struck a British man in the head because he publicly expressed views about Bahamian politics.

“FNM Theo in those days he was spirited in his language in describing the PLP and the FNM. This pub on the mall you know a lot of foreigners used to congregate as well.

“So happened that this Englishman, decided to get up and butt into our conversation and was telling Theo Farquharson how right he was. ‘That’s a good thing you’re doing.’ Next thing I know a bottle was across his head,” Mr Davis said.

What a joke; we could use more criticism. Hiding behind pride and feelings doesn't promote progress. We should be in a position to produce evidence of our competence and if we can't then present a plan to improve. More training, accountability and improve work ethic. Most importantly separate Government from business. We have a problem where politics (who you know) gets you a job not the attributes needed for the job.

LMAO. The very thin skinned, arrogant, nasty and incompetent Minnis has only succeeded in making an even bigger fool of himself. If only the internal laughter Nair and Sinclair must be enjoying right now could be bottled and shared with all of us.

.....questioned whether the Liberty executive had been “placed on a stop list” from entering the country. Liberty is the parent company of BTC.

Can you just imagine the pettiness of Minnis and Davis in threatening to stop Nair from entering the Bahamas??!!. These two bozos, Minnis and Davis, should instead be very much focussed on stopping all of the illegal aliens (mainly Haitians) flooding into our country....well over a thousand each month at this time of the year.....but, no, they don't give a hoot about our country's real problems. What a joke!

So the only thing the elected racists can come up with is xenophobia???

The funny thing is he was right. Ironically the day before all the hullabaloo I'd challenged a BTC employee to PLEASE try calling one of their stores. Nobody answers the phones. I went to one of the stores to see employees milling around gossiping. The staff act as if you're bothering them. But that's a general problem in the Bahamas. The staff DECIDES who they want to give proper service to. I don't know if employees are milling around and gossiping in Jamaica. I suspect not.

If the staff dont have anything to do and theyre bored, send them to a back room, leave one professional out front until more help is needed.

Mr: Davis it is wrong to hit any one across the head with a bottle.

"I KNOW THAT SOME VIDEO IS GOING AROUND" Dr Minnis said. the video is not as what had taken place.;

Those remarks make no sense at all. I am wondering what do the other investors think about roc wit doc example OBAN

When the FNM talked about all the investment especially the tex hub or what ever they called it for Freeport. Nova Scotia bank and many others all ready had their call centers outside of the Bahamas. Is doc late or is he again telling untruths,

The CEO only verbalized what is actually the case. Far too many Bahamian workers are incompetant, lazy and unproductive, especially in gov corporations and depts and then have the audacity to demand premium pay. The unions has also played a major role in this mess we are in. Its about time that a spade is called a spade and if it takes a foreigner to do it, I say more power to them