Life After Loss: Coping With A Spouse’S Death 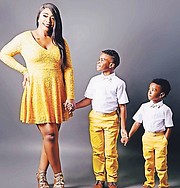 Wainger Flowers with her sons Andre and Alex.

The death of a spouse can have a profound, often devastating impact on our lives. It did for Wainger Flowers, a mother of two, who lost her husband of 10 years in 2016. She fell into a deep depression and lost the will to live. However, after much introspection, and with the help of her faith, she slowly clawed her way out of the darkness. And some good came of the experience, she said. Finding a lack of support groups to help her heal, Wainger set out to start her own organisation for widows, especially younger ones.

“Widows in Stilettos” is the name of her organisation, which has been growing by leaps and bounds in the few months since its inception. It offers widows a safe haven to express their grief and support from others who know first-hand the heartbreak they are experiencing.

Two years ago, Wainger fell into a deep depression after husband, Andy Alexis Flowers II, died from a heart condition. She described her late husband, who was nicknamed “Lex”, as the “true definition of a gentleman, a humble soul”.

The Bahamian couple were living in Naples, Florida, with their two sons Andre, 7, and Alex, 4. Almost a year before his passing, Andy was painting his son’s room with Wainger when he experienced a sharp pain in his left arm.

“Not wanting to take any chances, we rushed him to the hospital immediately. After a series of tests and an EKG, the physician told me that Lex had suffered a small heart attack. He was admitted into the hospital and a heart catheterisation was performed to see if there were any blockages in the heart,” she said.

Lex was diagnosed with myocarditis, an inflammation of the heart muscle usually caused by a viral infection which affects the heart’s ability to pump.

“As a result of the myocarditis he developed dilated cardiomyopathy, which is when the heart’s main pumping chamber, the left ventricle, becomes enlarged and weakened. As a woman of faith I always believed that my husband would be healed, and in the following months Lex showed major signs of improvement,” she said.

However, on December 12, 2016, life as Wainger and her family knew it was forever changed. She received a call from her husband’s doctors asking her to come to the hospital immediately because Lex’s vital signs were weak.

“At the moment I just knew that that would be it. I knew that he was dying,” she told Tribune Woman.

Once at the hospital she was greeted by the medical team who allowed her to have her final moments with her husband.

“It was almost as if he was just holding on until I got there. I hugged him and just started to tell him how I love him and how he was such a great father, loving husband and how God would really take care of us. And though I was always praying before, the one thing I was not doing was surrendering my all to Him. I just said, ‘God, may your will be done in my husband’s life. As soon as I said that Lex let go,” she said.

It took her months to even begin functioning again.

“After my husband’s death I literally wanted to die. Life had absolutely no meaning. Yes, I had my kids, but they didn’t have their father. Our world as we knew it was gone forever. As a wife I knew then, and have come to understand even more so now, the meaning of Genesis 2:24. The power of oneness with your mate is a very serious thing that only a widow or widower can truly understand,” she said.

“My life has changed in so many ways. I am now forced to play both mother and father role for the rest of my kids’ lives. As the sole provider for my household I must now strategically earn and manage enough funds to sustain myself and my boys now and throughout the future. As a result of this ordeal I battled with depression and survivor’s guilt for almost two years. Fighting to live when I wanted to die was the hardest thing I’ve ever done,” she said.

Wainger turned to the internet in search of support in the form of an online community, but could not find any to suit her needs.

“I was looking for a way to keep my husband’s memory alive while simultaneously looking for support for myself. After noticing that there was not much online support, specifically for young widows, it dawned on me that there was a segment from our society that had literally been forgotten about,” she said.

“The thought of others being in the state of deep, dark depression, from which I once managed to come back from, gave me a sense of urgency to create a platform where I could reach them and be a beacon of light and a ray of hope for them.”

After coming to this realisation, Wainger launched the Widows in Stilettos organisation this April.

“The aim of Widows in Stilettos is to uplift, motivate and empower young widows and women all around the world. Widows in Stilettos also symbolises confidence, beauty and strength. Think about it. How hard is it for the average woman to walk and maintain her poise in a pair of stilettos? In comparison, after all that we widows have gone and continue to go through, we manage to balance the cares of our everyday lives while gracefully towering over our circumstances,” she said.

Since launching the community on social media, Wainger – who still resides in Florida with her sons – has found that there are many women, not just here in the Bahamas, but around the world, who are struggling with their spouse’s death like she did.

Although none of their stories, pain and loss are identical, they need the support of others who truly understand what they are experiencing, she said.

Through her organisation, Wainger has been encouraging other women to hold on to life, even when everything around them is seeking to take it away.

“It’s amazing how many young women are currently challenged with widowhood. Through this platform I have literally connected with thousands of widows all around the world, both young and old alike. Many of them have expressed their gratefulness for such a platform. I, too, thank God for using me as His vessel to minister to my sisters as we all journey on this road to wholeness and healing. I often encourage widows that I come in contact with to trust God. As hard as it may seem, He loves you. Christ is the only true way that we can find peace amidst the confusion, hurt and pain,” she said.

For more information, visit the ‘Widows in Stilettos’ Facebook page.

Inspiring, even in the midst of trials there is beauty. Continue to hold on to God's unchanging hands.