Insight: Does The Plp Leadership Have What It Takes To Form The Next Government In 2022? 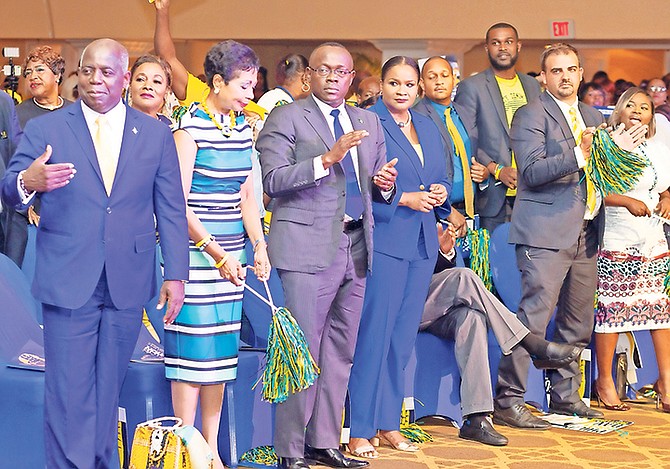 If all the returned leadership team of Philip “Brave” Davis, Chester Cooper, Fred Mitchell and Robin Lynes were hoping for at last week’s PLP convention was to excite their core supporters, then it may have not been an absolute waste of time. However, that alone won’t secure them an election victory Photo: Donavan McIntosh

AFTER the almost complete wipeout of the Progressive Liberal Party on May 10, 2017, many believed it would be the end of former Prime minister Perry Christie’s political career - and the end of the PLP’s relevance as one of the two major parties.

Fast forward two-plus years and only one of those opinions may be unequivocally true. Certainly, Perry Christie’s legacy ended unceremoniously, as he lost his seat to a now isolated Member of Parliament.

Nonetheless, Christie’s reign has left the PLP with a seemingly unshakeable stink no matter how much the party’s leadership tries to rebrand. The Bahamian people are simply not buying what they’re selling – not yet.

If all the returned leadership team of Philip “Brave” Davis, Chester Cooper, Fred Mitchell and Robin Lynes were hoping for at last week’s PLP convention was to excite their core supporters, then it may have not been an absolute waste of time. However, that alone won’t secure them an election victory in 2022.

It’s not implausible to believe they would have to hope for a complete botching of the next three years of the Minnis administration - with too many familiar faces in their current make-up.

Looking lower on the political landscape, the DNA are still not seen as a viable alternative. And with only a short time to drum up the kind of support that wins an election, an upset victory is unlikely for the fledgling party.

The Bahamas is still very much a two-party country.

Davis and company know this. Perhaps this is why there has been less urgency on the part of the PLP to truly rebrand with fresh faces. Deputy leader Chester Cooper, for all his potential, still remains a token figure in the minds of many Bahamians who believe any potential PLP government will still be formed with faces we really no longer wish to see in frontline politics.

Davis’ connection to the not-so-distant Christie administration has not been more prominent than this past week as tensions became obvious in the lead-up to the PLP convention.

Christie’s command of the leadership of the PLP was evident throughout the eight-year period from 2009–2017 where the party did not have a constitutionally mandated convention. Many observers credit this to Christie’s resistance to relinquishing power, which his successor Brave Davis should know all too well.

Christie, who promised to step down as leader and prime minister by the middle of his administration’s last term in governance, ultimately reneged on that promise. Subsequently, Davis did not get his chance for leadership until Christie was banished from the political scene in the election. Now, Davis has shown during the events leading up to the convention a resemblance to his former leader.

As last week began with subtle barbs exchanged between returning PLP chairman Fred Mitchell and Obie Wilchcombe, the former sought to make Davis’ desires for the leadership team of Davis, Cooper, Mitchell and Lynes to run unopposed at the convention known to all and sundry.

“No one expected, indeed the party faithful were promised a unified convention and now it appears from various voice notes and video clips that there is a propaganda campaign which is going on which is distracting us from the central job, or has the potential to do so, because it appears there is going to be some contest,” said Mitchell in a voice note that made the rounds throughout the country.

Davis, although calling the process democratic the entire time, also made it quite evident that he had no interest in Wilchcombe usurping Mitchell as the party’s chairman.

Sharing details from a conversation between himself and Wilchcombe, Davis said: “I say here what I have been saying to fellow PLPs: whoever wants to run for any position should run.

“This is the time to sort these kinds of things out. I feel very good about the current team’s forward momentum.

“But if Obie wants to make an argument about why he should be chairman, he should do so.

“He came to ask me about running and I told him I don’t see that he has the support. But if he sees things differently, no one is standing in his way.”

Wilchcombe’s second loss in his pursuit of the PLP chairmanship in two years - this time by nearly 500 votes - evidences that Davis didn’t have to stand in his way.

However, just as the delegates were not interested in Wilchcombe becoming the spokesperson of the party, a large portion of the Bahamian people experience a similar unsettling feeling about the PLP leading the country again.

Despite their penchant to promote themselves as a changed party, they still look very much the same.

Notwithstanding a passionate contribution from deputy leader Chester Cooper where he outlined the vision for the country under the PLP, the Bahamian people know these are the things conventions and rallies are made of – their sole purpose being to ignite a party’s base. Unfortunately, for all of Cooper’s promise, the traumatic period of 2012-2017 under the PLP is one the Bahamian people may not yet be ready to forgive – at least not without witnessing real change.

In 2017, the PLP missed a great opportunity in harnessing the mind of former Attorney General Alfred Sears. Seen as a true visionary, it is dumbfounding to many why he is not being elevated in the party. Perhaps this is why many Bahamians are not buying the PLP rebrand. Although many still cling to hope Sears is waiting for the perfect opportunity to strike, others understand this game is all about controlling the power within the party.

Unfortunately, bright minds like Sears lack the support from within and are therefore wasted towing the party line.

With the party firmly in the grip of the Davis team, we can expect an energised campaign to ensue as the PLP tries to make the most of the attention following the convention.

Time will tell if any of their efforts mattered to the Bahamian people.

Mr Strachan being as you say you are a Strachan, It is my hope that a flicker of light may enter into your darkness.

doc and his love to live the big life. 9000 for rent per month for CA Smith 10,000 for tea for
office of the spouse. They may very well increase VAT to 25% to maintain their life style remember they were saying the cupboards were bare but one of the first things they wanted to do was increase their pay Strachan the stink you wrote about seems to be of the FNM and your making, Strachan

Surely if you can see the wrongs of one party you should be able to see the glaring wrongs of the other. At least that is how a reasonable, objective mind works! The inability to do so means the mind does not function properly!

Oh poor Birdie. It's gonna be a long time before that party of scum rides again. Think about it. Minnis is not exactly an accomplished leader or a charismatic leader, no doubt if there were a viable option him and his party of red tape lovers would lose easily. Instead it appears the most mediocre FNM will win again. You're on the wrong side Birdie. Stop being an enabler and start demanding the PLP change their thieving, lying, totally incompetent, stealing ways....

The FNM and doc are masterful liars. see if you Strachan can rise above the lies.

The devil is the Father of lies and he must be very happy with his children doc and his FNM crew.

MR" Symonette and the elite can say they are better under the FNM Government life for the average Bahamian has become harder.

@birdie you talk about the devil and the bible a lot , just wonder what your views are on gay and lesbian rights and gay marriage

Bahamian voters would have to be really stupid to vote the PLP boys back in office again. Davis is currently on life support.

The voters are not stupid! Nobody wants them, only those 400 or so PLP's! Now with Sebas running on about bankrolling the PLP for 2022 because he can't his way all of them are now FINISHED! The two of You bye Bahamas Hello U.S.A. Federal Prison!!!!

catislandboy as you call yourself. Mr: Brave Davis can call himself the same.

They only know how to choose the same Old-Folks-Home escapees.

Gravy is not going to lead the crooked PLP to an election victory in 2022 ........ He is holding the seat for the PLP millennials ...... His generation are finished.

Honestly, lets be HONEST!! If you vote in Men with no Morals or values or coot,etiquette or diplomacy, Men who cheat on their wives, etc. how do you expect the country to be ran? Why would any right thinking well read and intelligent Voter, who knows the facts vote this Party back in? We will then remain the laughing stock of the world! Move on.....we can do better, even if it means taking our chance with the lesser of the two...current administration, and building a new and better opposition. Yes, the day we rid ourselves of Parties, is the day we move forward.

In 2017, the PLP missed a great opportunity in harnessing the mind of former Attorney General Alfred Sears.

Without a doubt Malcolm Strachan deserves the award for 'Joke of the Day' and should be seated at the front of the class of jokers. LMAO

The Bahamian people please do not be stupid and by the koolaid Brave Davis is trying to sell. IF he is fighting to have Fred Mitchell as his Chairman, that right there ought to speak volumes concerning his leadership potential and vision for the Bahamas. Don't need no more of this garbage.

@Malcolm Strachan, a very well outlined Insight again this week. I agree with your article.