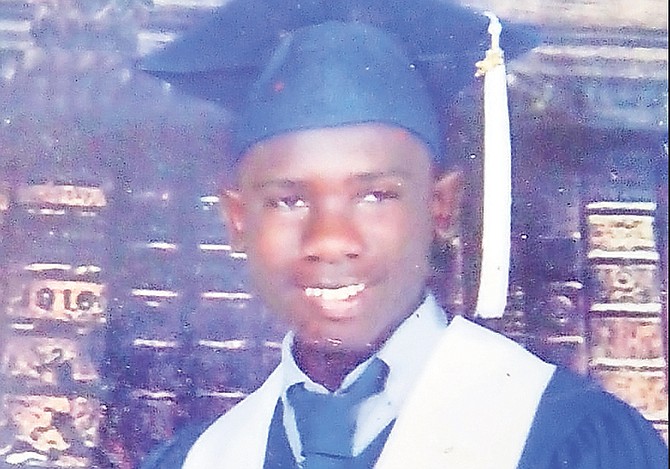 Jerry Device lost his life while riding a jet ski he had purchased just moments before his body was pulled from the water on Monday.

A DAY of fun at Lover’s Beach in Eight Mile Rock ended in tragedy for 20-year-old Jerry Device.

Mr Device lost his life while riding a jet ski he had purchased just moments before his body was pulled from the water on Monday.

The incident has left his entire family devastated, especially his mother Marianna Device, who is struggling to deal with the death of the youngest of her four sons.

The Tribune visited the family’s home in Hanna Hill, Eight Mile Rock, where Ms Device was very distraught as several close relatives and friends comforted her.

“He was a good son - the best son in the world,” she said as tears streamed down her cheeks.

The mother of five said that her youngest son helped to support the family.

“He would give me money to buy food and pay the light bill, and if I need money he would always give me,” she said.

According to reports, police were called to the Hepburn Town beach, where two men riding a jet ski had lost control and had been thrown into the water shortly after 4pm.

Assistant Superintendent Terecita Pinder said one man swam to shore, but the other never made it. The body was later recovered by officers of the Police Marine division, who were also assisted by local residents.

ASP Pinder said the body was pulled from waters shortly after 6pm, and that EMS personnel on the scene found no signs of life.

Miranda Device, the sister of the deceased, said her brother could not swim. She had only learned after his death that he had just purchased the jet ski.

“They (Jerry’s friends) tell me he buy a jet ski that same day and that he went to try it out and it flipped over,” his sister said.

According to Miranda, her brother left home between 3pm and 4pm on Monday. It was the last time she saw him alive, she said.

Miranda described her brother as a hardworking individual, who worked at the container port and would always ensure that food was in the house for their family.

“He always made sure we were straight,” she said.

“He was also a fun person to be around; he was the clown of the family and made everyone laugh. We were cracking jokes before he left home yesterday, and I did not know that it would be the last time I would see him.

Miranda added: “It does not feel like he’s gone. It feels like he still there in his room. He was my mother’s favourite.”

Adrianna, a cousin of the deceased, said that Jerry was a good person, but was hard-headed when it came to friends he kept.

“They (Jerry’s family )always used to tell Jerry his friends were bad company,” she said.

“He was a good person. I never imagined that our cousin, brother and uncle, would ever leave us like that,” she said.

Police are urging persons to be very careful this summer while at the beach.

ASP Pinder appealed to parents to ensure children and young people are properly supervised when in the water.

“Young persons on jet skis who know they cannot swim should wear a life jacket which can save your life,” she said.

Investigations are continuing into the incident.

I really don't want to be crass but good lord. Why would anyone who can't swim buy a jet ski????? And use it without a life vest??????

We have to be smarter than this man. This poor family. Mourning a death that could have easily been avoided.

There is a lesson in this for everyone. Be smarter, be mature, make the right choices....

Agree ... none of us wants to rip a victim or his family in a time of tragedy, but ... c’mon: The guy can’t swim, he’s not wearing a life vest, and he leaps onto a JetSki and goes ripping off into deep water, stunt-driving his new toy. This would be like me setting out to climb Mt. Everest in tennis shoes and a T-shirt.

True ... but the guy was 20 years old. We’d hope that by that age, living on an island, there’d be more awareness of the dangers.

He was 20. Their thinking patterns aren't like older people. Has anyone seen a 40 year old popping on a motorcycle recently? At 20 nobody is thinking about the dangers involved, it's "fun". He could have also just as easily gone out and had nothing happen.

Only fate protects you from death.

Most mothers will not say that about their boys .......... despite it being true.

Just say sorry for the lost of your dear one, that will suffice

Ok.,independently of the victim's way of thinking,in this case a 20 years old male, named Jerry from Grand Bahamas,working at a local container port,full of life with the satisfaction of fulfilling his duties as a young man with the sense of belonging to a family,lovely mother,sister,cousin and so forth., his death is so sad and unacceptable.,everybody,including specially local Police Marine divission are called to do their part as liable,responsible individual to also comply their duties of reinforcing the enacted,current laws to make sure accident and so many other events like this,never ever happens again. The government with all law enforcement officers are the ones to be blamed for not doing their part of being vigilant and to monitoring inappropriate behavior and is the government responsibility to add enough laws enforcement officers to do so. Absolutely nobody should buy a vehicle or any other kind of things that requires licence to operate. Outhere,there are a lot of youngsters, also adults,for years,driving cars without a driver license. We find a lot of fishermen as well, around the coastline cleaning fish and throwing bloody remaining into the water,making a hazardous conditions for innocent people to become victims of shark attacks while looking up for fun. A shark is able to smell blood from dozens of miles. This is a disaster in detriment of human life that requires urgent address.

There has never been a shark attack that was caused by cleaning fish. Pintard's statement was totally ignorant...