School Repairs ‘Will Be Done On Schedule’ 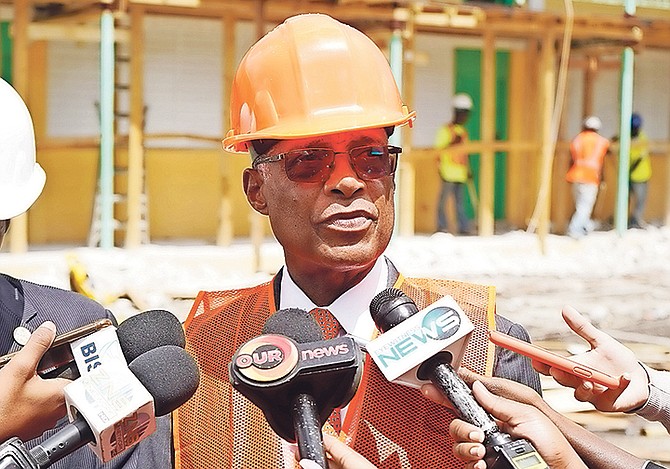 NEARLY $9m has been budgeted for critical school repairs, Education Minister Jeff Lloyd said yesterday as he, along other Cabinet ministers toured four schools in New Providence which are undergoing “serious, urgent repairs”.

The price tag for the repairs is up from the $7.2m figure he identified to reporters earlier this month. Mr Lloyd yesterday was confident the reparis “will be completed in time” for the opening of school on September 2.

However, Bahamas Union of Teachers president Belinda Wilson yesterday expressed her doubts that this would be feasible. “I’m not optimistic that in three weeks time, when schools reopen that these schools will be ready,” she told reporters.

Mrs Wilson called for alternate sites to identified in the event the repairs are not completed.

While Mr Lloyd underscored his faith that the restorations will be complete, he did note that there are “contingencies” in place.

“We have whatever is required for school to start on September 2,” he said.

Mr Lloyd also defended the timeline of repairs, insisting the works began “almost immediately at the conclusion” of the school year.

“Today Cabinet decided that it wanted to an inspection, a formal inspection of the schools,” Mr Lloyd said. “Of those nine critical schools, and when I say critical I mean those in need of serious, urgent repairs, structural as well as roof repair, including electrical and plumbing.

“We decided that today we wanted to take a tour of four of those schools: CI Gibson, CH Reeves, LW Young and Donald Davis…These are the most serious of deficiencies and disrepair that the school system (has) experienced. It’s not the only situation of disrepair, but these are the most serious. And it was a decision that we had to address the fundamental deficiencies.

“Unfortunately in times past, for any number of reasons, we we were only able to do patchwork,” he continued.

“We could not take that chance this year, because in many instances as you would have seen we are talking about balconies and floors which had been seriously compromised and needed to be addressed because otherwise they would pose serious safety challenges, health challenges to our students and teachers and administrators.”

Noting the presence of Works Minister Desmond Bannister, Mr Lloyd added the cost of “this particular segment” of summer repairs is “$8.9+ million” or $9m.

He also expressed his confidence in the nine “seasoned” contractors that have been selected.

Reiterating the nearly $9m price tag, Mr Lloyd added: “Now, like I say, that’s what has been budgeted so far. But (as these) contractors pull down the work and start to do their repairs, they come upon matters they could not anticipate, so obviously there might be some need for further contingencies. But we do that on a case-by-case basis.”

Regarding criticisms these works should have begun earlier, Mr Lloyd noted these massive works could not begin while school was in session.

“This is now the 30th of July, these contractors have been on site now for four weeks. School just ended in fact at the end of June so they have been here almost immediately at the conclusion of the school day.” 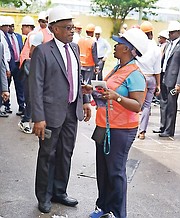 “This is not the end all of everything, this is the first attempt for us in the summertime to take a massive structural engineering and construction challenges and take them on in a very, very short period of time.”

“The prefabricated schools that we have, the Ministry of Education is coming up with the initiative as to how we’re going to replace those schools over time. Those schools were built for the lifespan of 15-20 years. And they were built in 1975 and 1976. We have a lot of work to do with respect to those schools to ensure that our children are educated in the environment that you would want them to be educated in.”

Mr Bannister noted Family Island school repairs are “essentially being led” in those islands. However, he noted the ministry is receiving “positive reports from there”.

Mrs Wilson, for her part, noted the “great effort” to repair and renovate the schools.

“But I’m not optimistic that in three weeks time, when schools reopen that these schools will be ready,” she said. “So, I would have spoken to the minster of education today along the lines of looking at alternate sites for our students and our teachers when school reopens. But I must say it’s a great effort.”

She called for the minister and Ministry of Works to develop a “strategic plan” for the maintenance of schools year round. She also suggested maintenance teams to be assigned to various districts to conduct repairs year round to prevent a “mad rush” in an attempt to “repair school three weeks before school opens”.

“So I hope 2020 we will not be back here three weeks before school opens to be scrambling around to find out if schools are going to be ready.

“I say thank you for the work I see being done. They are now answering the cries that we have had for many years and hopefully we do not have to have industrial action at these four schools that are being repaired. So, a word to the wise is sufficient.”

We hear this every year! We also hear (in late August) that 'most of the repairs have been completed. There are just one or two projects that won't be finished on-time.'

Yeah that'll be the next report. And then the report of teachers not showing up for work after that one. Then the next report will be industrial action like she mentioned in the last para....

Are these MOE "summer repairs contracts" every publicly bidded on .......... laid in Parliament or placed on MOF website for public scrutiny?????? ........... How does the MOE spend monies on the same schools every year, despite each big school having a School Board budget??????