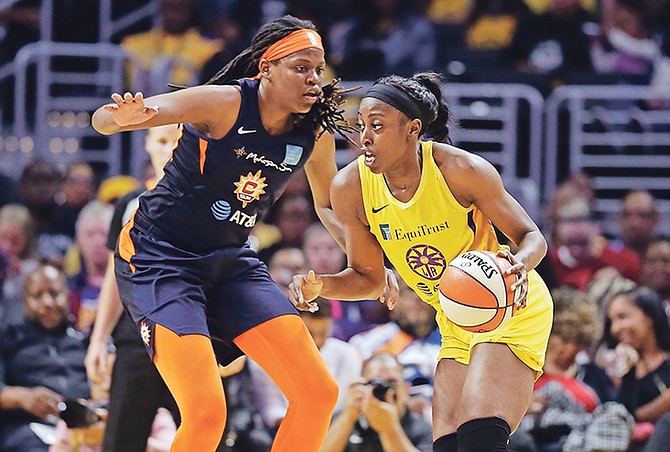 JONQUEL Jones scored 10 points in the fourth quarter and recorded her second double double of the season in a come-from-behind win for the Connecticut Sun.

Jones finished with 16 points and 13 rebounds in the Sun’s 80-74 win over the Las Vegas Aces last night in Las Vegas, Nevada.

In a matchup of potential WNBA MVP candidates, Jones went head-to-head with Liz Cambage, who made her Aces debut with 14 points and seven rebounds.

Jones has three double doubles and the Sun have started the season 3-1.

On Friday, the Sun suffered their first loss of the season, 77-70 to the Los Angeles Sparks in an early season matchup with former No.1 overall pick Chiney Ogwumike.

Jones posted another double double. She scored 16 points and dominated the boards with a career high tying 22 rebounds. Ogwumike scored 20 points on 7-for-11 shooting from the field.

Jones hit a three to pull the Sun within one with 4:33 left in the fourth quarter. She followed with a three-point play nearly three minutes later to give the Sun a 69-67 lead with 1:41 left in regulation.

This offseason, Sun traded Ogwumike to the Sparks for a 2020 first-round pick, creating an increased role for Jones.

When Ogumike was injured for the entire 2017 season, Jones posted a breakout season, but was then relegated to a reserve role in 2018 once Ogwumike returned to the floor.

The Sun will host the rematch with the Sparks 7pm Thursday at the Mohegan Sun Arena.

“Just staying consistent, making sure I come to work every day and have that work ethic to take it to the next level,” Jones said at Sun media day. “The year that Chiney wasn’t here because of injury I showed that I could do it. I’m not shying away from it, I think it’s something I’m definitely capable of and it’s something that I’ve done before.”