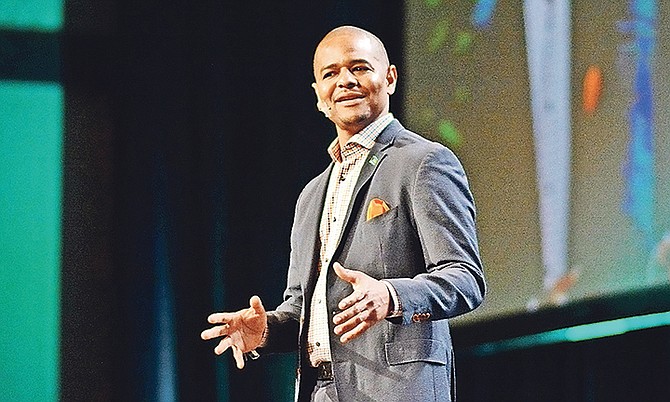 When I visited the East Bay Street head office of Investar Securities at 10am on Monday June 3, a dozen citizens were already there waiting to subscribe to either of the two Titan Mutual Funds being launched. They had been attracted by the intensive publicity campaign that started ten days earlier when over 2,000 people gathered at the Baha Mar Convention Centre to hear Sebas Bastian and his team tell Bahamians why to consider investing in the Funds, followed by a second-by-second countdown clock shown on print and digital media leading up to Monday’s 9am kick-off moment.

This marketing effort had its gestation years ago, when in 2009 imaginative young entrepreneur Sebastian Bastian founded the Island Luck gaming venture (or “web shop”), which in 2014 became a legally recognised operation regulated by the Bahamas Gaming Board. Government granted licences for eight gaming houses, with premises throughout the country. Barred from our hotel casinos, Bahamians could now satisfy their itch to “play the numbers” on hundreds of screens showing on-line results of US state lotteries. Island Luck (under its corporate name Playtech Systems Limited) soon became the dominant web shop, recruiting and training good managers and technicians to handle the largest number of players—and naturally collecting the highest fee revenues from punters risking their cash against the odds of a pay-off.

The current Fund offering is a classic example of “cross-selling” practised by any sales organisation: if one product sells well, that creates a captive market of contented customers willing to try another product. The 40,000 account holders of Island Luck have found that its easy-to-play games give them fair odds, win or lose. Naturally, they are favourably inclined to consider an investment product offered by Mr Bastian.

Island Luck’s success has enabled him to create other ventures, in mortgage finance, property and construction development, television production and also to found charities. It is in good standing with the Treasury, having resolved financial issues after last year’s increase in taxation rates for gaming companies, with all assessments duly paid.

A sound underlying structure was created for the Titan Funds, which were approved after close scrutiny by the Bahamas Securities Commission. Over-all management responsibility lies with their Boards of Directors and with the sponsoring firm Investar, a licenced securities dealer. Its principals in addition to Mr. Bastian, include such stalwarts as Hillary Deveaux, former Executive Director of the Commission, Lowell Mortimer, attorney and shipping executive, and Felix Stubbs, long-time head of IBM Bahamas. The task of implementing the Funds’ objectives by selecting specific investments has been contracted to Leno Corporate Services, another licenced securities dealer and member of BISX.

The crucial position of Evaluation Agent has been assigned to the BDO international accounting firm, whose local unit is headed by senior practitioner Clifford Culmer. The Evaluation Agent will determine the continuing Net Asset Value (NAV) of the Funds and their underlying holdings, thus setting the price for monthly buying and redeeming of Fund shares. Although this appointment was not named in the initial offering documents, in my interview with Mr. Bastian he assured me it would be confirmed to Fund shareholders.

It’s too early to predict total Fund subscriptions during the initial month-long offering period, or how they will be split between the two Funds. There will probably be no shortage of investors attracted to this offering; the challenge will be to quickly turn their cash into appropriate investments. The Fixed Income Fund, with a minimum $1,000 subscription, authorised for Government Bonds and other interest-bearing securities, may initially grow more rapidly, given Bahamians’ traditional preference for current yield over capital gain.

However, the Balanced Fund, available for only $500, has special features that will appeal to more adventurous investors. It can invest up to 50 percent of its portfolio in equities and special situations, including 35 percent in Playtech Systems (Island Luck) . This investment cannot exceed five percent of Playtech’s issued shares, subject to increase approved by the Gaming Board. Although no financial statements are available, Island Luck is generally assumed to be very profitable, and its fair value in the Fund will be determined by the Valuation Agent.

While our two established investment banks, Royal Fidelity and CFAL, already continuously offer an assortment of well-structured bond and equity mutual funds to Bahamian investors, the special features of the Titan Funds and the more aggressive marketing to smaller investors and Family Island residents may result in a substantial increase in the quantity of mutual funds outstanding. This will be a welcome development, since we sorely need more “economic democracy” evidenced by wider ownership of growth-oriented investment securities rather than bank deposits.

The success of the Titan Funds will be grounded on the reputation of Mr Bastian and The Bahamas gaming industry, which are now beyond doubt. While there will always be citizens and religious groups who object to monetary games of chance on moral or spiritual grounds—that is their privilege—it’s clear our economy benefits from the financial contributions and educated employment opportunities. The gaming industry is here to stay.

Downtown: A memorial to Olde Nassau

On a hectic downtown corner, where busses and tourists jostle for passage, there still operates a well-preserved relic of our past: A Baker & Sons, Established 1894. This traditional haberdashery makes no concessions to the trendy fashions of today, but a savvy customer can find well-made shirts, pullovers, underwear, handkerchiefs, pyjamas, socks and ties stuffed in glass cabinets along the narrow corridor or lining the walls. The styles are yesterday’s, but so are the prices. Straws and fedoras for men of an earlier generation are featured, plus one front window devoted to classics for pre-teen young ladies.

Other than hand-written sizes and prices, no publicity is on display, but a friendly bustling lady can find anything requested. It will be a cash-only purchase, which will be tucked away in a box from which change will be produced. There has been no need to up-date the commercial practices followed for many years by Elizabeth and Mary, the white-haired sisters who kept store into their 80s, daughters of the late George Baker.

He was known in his day as the country’s largest property owner, with holdings scattered throughout the islands. The store is tucked into the ground floor of the edifice owned by Mr Baker looming over the intersection of Bay and Frederick Streets. It was once home of the long-closed Windsor Hotel, whose two storeys of balconied terraces facing Bay provided the best view of the Junkanoo Parade while the bar and restaurant on the Frederick Street entrance welcomed New Year’s revellers.

Years ago Mr Baker, in his 90s but still presiding in his Bakco Buiding office on East Shirley Street, told me he was “thinking about” developing the building for some profitable venture, but clearly he expired first. Now, it seems the venerable structure, still looking solid as a rock, has been given a fresh coat of pink paint. Perhaps Mr Baker’s descendants are at long last considering how to earn a return on their inherited asset. With downtown stimulation soon coming from the new cruise port, the economic anomaly of a huge centrally located vacancy in the heart of our capital city cannot last for ever.

Whatever happens, I hope I can still shop in A Baker & Sons, a memorial to Olde Nassau.