DIANE PHILLIPS: Honestly, I’m all in a pickle 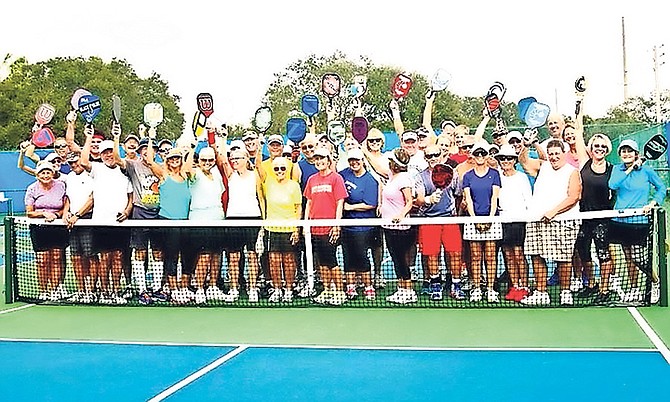 It’s possible that I slept through the last decade but highly unlikely so how else do I account for the fact that until Friday I never heard of the world’s fastest growing sport? Wonder if you have.

It’s called pickleball. Not a very auspicious name for something that is suddenly at the top of the popularity charts. All over Florida, pickleball enthusiasts, who are obviously well-organised, have commandeered hard surface tennis courts and transformed sections of them into pickleball courts. They painted their court lines through the heart of no man’s land and beyond the service line, breaking the back half of any court they’ve abducted into something that resembles one of those games that kids take on a car ride with Parcheesi on a chess board. New lines in different colours overwhelm existing lines.

Playing tennis, or attempting to play tennis on a pickleball court is like seeing double twice. The problem is it’s hard to play two games at one time so whichever one you choose triggers second thoughts about the value of sharing.

What is pickleball? Here’s a pretty accurate description: “Imagine playing tennis on a badminton court with ping pong paddles and a whiffle ball.“ What, you couldn’t just settle for any one of the four sports, you had to toss them all in a leisure time blender and come out with the athletic version of a green drink?

Actually, that’s how pickleball got is start. The history of it (yes, there really is a history – and now a university) the history of it is that a Congressman from Washington State named Joel Pritchard and a few friends - Bill Bell and Barney McCallum (now pickleball heroes on the order of what Vince Lombardi is to football or Billie Jean King to tennis) - had just finished a round of golf. When they returned to the Bainbridge Island house where spouses and children were waiting with nothing to do, they decided to improvise. They found ping pong paddles in the garage, someone erected a badminton net and the rest is, as they say, the history.

That was in 1965. In 1972, a corporation was formed and by 1976, the first pickleball tournament was held. Not surprisingly, the sport was largely confined to the far northwest until suddenly it wasn’t. Now it’s all over like measles or flu, fully organised with rules, regulations, levels, ladders and tournaments. Since the first video was published in 2013, online coverage has exploded. One site says pickleball is less a sport and more a way of life. Another says it’s addictive. All agree it’s great for Phys Ed programmes because it’s a space saver (court is 20’ by 44’, tennis courts are 78’ x 27’) and great for seniors because it gets them up and moving when tennis becomes too hard.

With hundreds of thousands of people now pickleballers, pickleball parties everywhere and more than 75 courts popping up or being commandeered every month, those of us who still struggle to play a game of tennis are in a real pickle. How did it happen overnight?

Whatever you do, don’t miss Rocketman

Rocketman, the rocky road and stomach-churning roller coaster ride of one of the greatest musical geniuses of all time, Elton John, is a must-see movie for anyone who can handle the honesty.

The film begins with a scene of Sir Elton as he enters rehab, still dressed in one of his outrageous costumes, still longing for another snort of cocaine or the swig of a bottle of whisky or anything to numb the pain of what he really longed for from the time he was a child, another human’s love.

Watching the movie you wonder how Elton John would accept the brutal nakedness of his desperation, the tragedy of his begging his father for the hug that never came, the recognition that the man he thought was his true love was a whore in a thousand dollar suit.

As the film, filled with the magic of his performances and the singularity of his talent, the credits roll. Elton John served as executive producer. He has been clean for 28 years and happily married to David for 20. He has stopped touring to give the sons they adopted the love he never had as a child. He may go back on tour one day but until then, savour the cinematic perfection that is Rocketman.

We should call time on Mr Bald

He sat in the booth behind us, his back to my back, my husband afforded a view of his fully bald head, the kind that only comes with the aid of a barber who dislikes hair. I did not have a view, only sound, the sound of his voice on a conference call on his cell phone, blaring out it ‘on speaker’ the whole time we attempted to have a late breakfast in one of our favourite delis in Florida.

In between savouring bites of chopped chicken liver, I could hear “NO, I told him No. Put her on.” Second caller conferences in woman, third voice: “That is NOT the way it is going to work. You SAW the agreement.” First man, the bald one. “We are friends.” “That’s what I am trying to tell you, but the (undecipherable) is the (more undecipherable)” and on and on it went until he must have finished his eggs served with a dollop of inconsideration and a dose of just plain bad manners. We could only celebrate his departure with a sigh from our table that must have been heard across the din of the deli.

Manners matter. Maybe Mr Bald (and overweight) did not care that we overheard his conversation - but we cared. Just wonder what someone like that is like when it comes to helping an elderly person across a street or sharing food with someone who looks like they had not eaten for too long? Maybe I already know the answer.