Destroyer Pays A Visit To Highlight Growing Relationship With Us 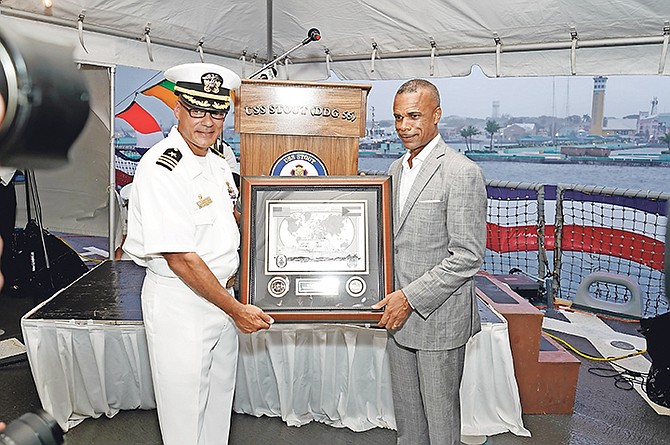 NATIONAL Security Minister Marvin Dames celebrated the arrival of an Arleigh Burke-class guided-missile destroyer to Nassau ports on Friday alongside American embassy and navy officials. The USS Stout arrived in Nassau on June 12.

During the reception, US Charge D’Affairs Stephanie Bowers highlighted US efforts to collaborate with the Royal Bahamas Defence Force. She said since October, 2018 there have been 25 interdictions of cocaine and marijuana, resulting in the confiscation of over 490,000lbs of marijuana and almost 500 kilos of cocaine with a street value of over $505 million. “During that same time our joint forces interdicted 41 migrant sea vessels, resulting in the repatriation of over 1700 migrants,” she said.

“In April we inaugurated a maritime surveillance radar on the island of Inagua. Within the next year, a second radar will be installed on the Coral Harbour base in New Providence. Today, I’m happy to announce that we’ve just received approval to fund a third radar which will be installed on Great Exuma. Once operational, these radars will significantly enhance the RBDF’s ability to monitor illicit activity transiting Bahamian waters.”

For his part, Mr Dames said The Bahamas’ relationship with the United States continues to grow.

Yes. Good and amazing stuff. I hope Trump will soon give us an ambassador. Did i miss the report? I follow the news quite well but im not perfect. Does anyone remember a report of a radar being installed in April on Inagua? Glad it's finally there. Only been waiting on it since Roker days.