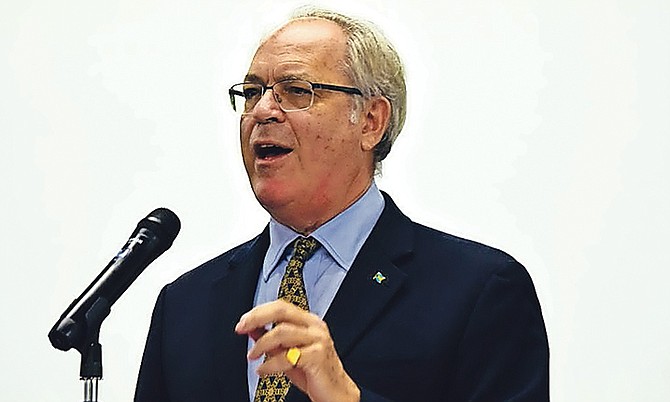 THE award of a major contract to upgrade two runways at Lynden Pindling International Airport to a firm with family ties to a Cabinet minister has renewed long standing opposition claims of conflict of interest.

Bahamas Hot Mix beat five other companies for the rehabilitation work to Runway 09/27 and Taxiway India at LPIA, according to the Nassau Airport Development Company, which stated the capital project was valued at just under $20m.

Hot Mix has long been linked to Immigration Minister and St Anne’s MP Brent Symonette, and Progressive Liberal Party chairman Fred Mitchell yesterday called on the minister to choose between his public role and private interests.

When faced with similar accusations in 2009, Mr Symonette explained that his children’s trust may have a small investment in the company, but he did not. At the time, Mr Symonette, who was a Cabinet minister in the Ingraham administration, said he played absolutely no part in any of the competitive processes or negotiations of contracts related to Hot Mix.

The St Anne’s MP did not respond to calls placed yesterday.

Mr Mitchell said: “This government is the most cynical, hypocritical, irresponsible and greedy group of people this country has ever come across. They are blatant with their abuse of the public purse. They lie like a rug, at the drop of a hat and keep telling us that what we see is not what we see.

“Hard on the heels of a five million dollar contract to Brent Symonette’s company for the use of the Town Centre Mall as a post office, we now have 20 million dollars in contract money from the Public Treasury being handed to another (company his family is tied to),” he continued.

According to NAD, the request for tenders (RFT) for asphalt paving services was initiated in April and was sent to four international and two Bahamian firms.

“The rehabilitation exercise will result in required upgrades to asphalt, extending the life of the runways at LPIA. Runway end safety areas (RESAs) will also be added to reduce the risk of damage to aircraft that overrun the runways and new LED approach lights will be installed to assist pilots during low visibility operations,” according to NAD, which announced the project’s start over the weekend.

“A total of four bids were received and submitted to the independent pavement consultant for evaluation including three international companies (United States, Canada and Costa Rica) and one Bahamian firm,” the statement read.

Hot Mix was selected by consultants Golder Associates Ltd, which was brought on to conduct pre-engineering, design, tender preparation and contract administration services for the runway rehabilitation project.

The NAD statement continued: “Golder determined that the company submitted the most competitive bid and met all of the specifications required to complete the project in the most efficient, cost effective and timely manner. In recent years BHM has successfully delivered runway projects at the following airports: Marsh Harbour -2006, Norman’s Cay – 2013, Bimini -2015, Staniel Cay -2015, Hog Cay -2016, and Grand Bahama International Airport -2016. In addition, in 2009, BHM would have successfully remediated significant paving works on LPIA’s main runway (14/32) after its reconstruction from 2004-2006.

“Its team of 150 staff has repeatedly delivered Bahamas Civil Aviation Authority (BCAA) and Federal Aviation Administration (FAA) compliant projects, utilising the BHM International Organisation for Standardization (ISO) accredited operating procedures for 9001 Quality Assurance and Control, 14001 – Environment, 17001 – Compliance Testing and 18001 – Safety. It is NAD’s expectation that the LPIA airside pavement rehabilitation project will be delivered safely, to specification, on time and on budget.”

In 2009, former Minister of Works Neko Grant tabled a listing of all government contracts issued to Bahamas Hot Mix in the House of Assembly. Mr Grant was responding to questions by Golden Gates MP Shane Gibson, and he revealed that Hot Mix been awarded at least $77 million in contracts over the last 10 years. At the time, Mr Symonette strongly denied conflict of interest claims.

The runway upgrades began yesterday, and LPIA will operate as a single runway facility over the next four to six months.

“NAD officials are advising members of the travelling public to exercise patience when arriving or departing from LPIA, as there will likely be delays resulting from the runway rehabilitation project,” its statement said. “Motorists using the intersection of Windsor Field Rd and Rock Plant Rd are asked to approach the area with caution, pay particular attention to signage in the area and be aware of heavy equipment movement in the area starting this week. Crews will conduct work between sunrise and sunset.

“Based on the projected timeline, NAD anticipates works being completed before the busy Thanksgiving travel period,” it added.

You know this might actually be something if Hotmix WERE NOT THE ONLY OPTION IN THE COUNTRY FOR WORK LIKE THIS.....

Damn man. The PLP gave Hotmix millions in contracts when they were in power simply because THERE'S NO OTHER COMPANY THAT CAN DO THE WORK....

Hey Proudcloudnfnm, commentators like the person you are responding to are just not interested in the facts of a matter they are driven solely by a narrow political agenda which has little or nothing to do with the truth.

I am not set in opposing awarding of a $20 million contract to upgrade two runways at Lynden Pindling International Airport to Bahamas Hot Mix, but isn't this but sequel movie watched in theater Imperialist red shirts before -where a comrade cabinet minister thinks it's okay respond with his children’s trust "may" have a small investment in the company, but he did not.
I'd think the Populaces would not only expect full ownership declaration be required and made public on any and all companies doing business with Populaces government........ regardless, no individual can be be allowed plead such ridiculous contempt public disclosure but only after a $20 million contract had been awarded, "children's may have interests," yes, no.............

Just maybe the FNM will stop their all for me baby when they talk about the PLP .

No doubt Brent Symonette has grown richer under the FNM. This can not be denied who knoows about the bids and the best man for the job. The FNM Government. they have all of the facts,

Truth the rich are getting richer under the FNM Government and the poor who cares.

Is he the same man who at one time awarded himself a contract, How about that?? Not to mention quieting property. May Joyce soul rest in peace.

Why do you think the PLP gave Hotmix 86 million in contracts Birdie?

birdie is an ass. He,she is so out of touch. The plps just can't handle the truth. Maybe fweddy should tell us why no other Bahamian company bid or if he would be upset if it was given to a foreign company instead of BHM

The truth is folks.... BHM is the only Bahamian paving company who will do a proper job.

I remember when the road works first started under the PLP , Bethel trucking got the contract .It was so bad and so costly per mile that the IDB stopped it and held up on the money and that's the reason Ingraham had to bring JCC to do the job ..Its simple Hot Mix is the only one here and Bahamian owned that is capable of doing the job

LOL, would put money on the same people saying its Corrupt for BHM to be awarded it, to say typical FNM giving the jobs to foreigners if they weren't awarded it (BHM was the only Bahamian company to apply). Case of Dammed if you do and dammed if you don't.

The Symonette family have a monopoly on hot mix asphalt in the Bahamas because of the ultra aggressive pricing they introduce whenever a potential competitor tries to establish a competing enterprise by taking market share away from them. This Symonette family monopoly will continue until the government decides that it's not in the country's interest to be held hostage to only one provider of hot mix asphalt and related paving services.

The $20 million NAD contract could have been used to seed the creation of a competitor with appropriate government support until the competitor reached the critical size necessary to compete on its own (head to head) with Bahamas Hot Mix.

Right now it's utterly disgraceful that the Minnis-led FNM government is aiding and abetting the existence of the Symonnette family monopoly notwithstanding the grave conflict of interest that exists by virtue of Brent Symonette being a cabinet minister. Of course Brent has no shame at all now that Minnis has anointed his deceased father (Pop Symonette) a national hero.

As if the Post Office conflict of interest was not enough of a slap in the face to right thinking Bahamian people by the Minnis-led FNM government. One can only begin to imagine the many conflicts of interest that Minnis must be supporting behind the scenes for the benefit of the political elite, their family members and their cronies a/k/a muck-a-mucks!

That's called free enterprise .I remember when the PLP used taxpayer money to bring in an asphalt plant out on Awarak cay so their buddies could get the government contracts and compete against Hot mix ,, the machines were rusted pieces of junk w in a decade .I,m glad they are only renting a post office and not building one .The post office and letters are going the way of the Dodo bird ,,Mr Shippit and the freight forwarders will handle our amazon purchase etc ,,unless you want to wait months on packages you might recieve

Free enterprise is not about private sector monopolies being aided and protected by a government with taxpayers' dollars and a cabinet minister who has a serious conflict of interest. Your insinuation that the Symonette family is one of a very few Bahamian families capable of owning and operating a successful business (that enjoys a wealth of government contracts) is also not appreciated, and certainly is not true.

So Government should let a first time operator do a critical infrastructure program such as the runway to make sure there is competition. A company who would therefore have no experience in doing this? I take it if the Government had to pay them $40 million this would be OK as long as it isn't BHM.

Government encouraged monopolies in the private sector are not in any one's interest.....especially one controlled by a cabinet minister. Running an asphalt/tar hot mix plant and providing related paving services is not rocket science, especially if you're guaranteed the lion's share of government padded contracts throughout the Bahamas by virtue of a conflict of interest that preserves the monopoly.

There is more then 1 Bahamian asphalt company. In fact two were asked to bid and only BHM did.

well-mudda is such a loser. your argument is so flawed.

I see no problem with this. It is a non-issue. Where do we stand on lowering our electricity bills? That is a real problem. Maybe some of these talking heads can offer up a solution to that instead of waiting until AFTER govt offers their solution?