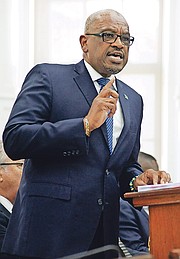 PRIME Minister Dr Hubert Minnis said changes in the budget presentation explain the apparent boost in the allocation for the Office of the Prime Minister in the upcoming fiscal year.

The OPM’s budget for domestic travel, allowances, office supplies and stationary, food, ice and drinking water has increased compared with the 2018/2019 allocation. The budget for domestic travel has increased by 60 percent, for instance, up from $136,416 to $256,738. The opposition has criticised the increase, with Progressive Liberal Party Leader Philip “Brave” Davis questioning whether the funding is for the prime minister’s re-election campaign.

Dr Minnis said yesterday in the House of Assembly: “It is important to point out that overall, the allocation for the Office of the Prime Minister has actually been reduced. In previous budgets, a number of initiatives and units were displayed as separate line items under the Office of the Prime Minister. For example, the Over-the-Hill Initiative, the Prime Minister’s Delivery Unit, the Bahamas Investment Authority, the Strategic Planning Committee – which was formerly the National Development Unit, and the BEST Commission, were all listed as individual and separate line items under Head 14.

“This meant that all of the elements in their respective budgets, such as supplies and material food, services, travel, and so on, were presented within each of their individual line items. So, what previously accounted for travel for the Office of the Prime Minister, now includes travel for all of the units and departments I mentioned earlier.

“Although it may appear that some items under my office would have increased substantially over the year, this does not in fact represent a massive increase in the allocation. For example, in this budget you will see that the allocation for printing and duplication service grew from $3,000 in 2018/19 to $242,250 in 2019/20. However, this now includes printing services for the following sections: the Office of the Prime Minister in New Providence, which totals $4,750, the Prime Minister’s Delivery Unit, which totals $9,500, the Over-the-Hill Initiative, which accounts for $190,000, and the Strategic Planning Committee, which totals $38,000.

“Similarly, you will see that the allocation for domestic travel and subsistence increased from $74,000 in the last budget to $256,738 in this budget. Again, this line item no longer accounts for domestic travel for the Office of the Prime Minister only, but for all of the other initiatives and units, including, for example: $42,038 is attributed to domestic travel for the Bahamas Investment Authority, $11,400 for the Strategic Planning Committee travel expenses, and $5,035 for the Prime Minister’s Delivery Unit travel expenses.”

He said $4,750 is for the Bahamas Investment Authority subsistence expenses, $2,850 for the Strategic Planning Commission, and $665 for the Prime Minister’s Delivery Unit.

“Again, these allocations for domestic travel were previously in the line items of each of these units in past budgets,” Dr Minnis said.

This same Man criticizes the PLP for their travels he has increased the amount for his travels. doc what about the office of the spouse. is that included in all your extra funds?

doc is having a grand time while the poor people of the Bahamas suffer and are burdened with extra Taxes.

They deserve it all for allowing themselves to be fooled by foolish people.