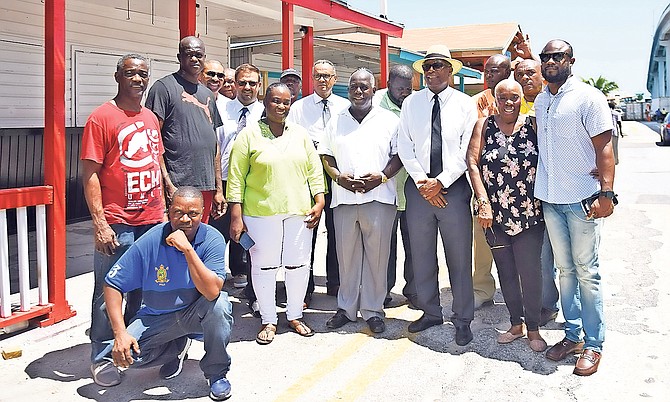 THE government should consider waiving the rent of Potter’s Cay Dock vendors to offset falling profits vendors say they are experiencing due to new traffic and parking policy changes at the site, according to PLP leader Philip “Brave” Davis.

The associations have raised issue with a recent policing strategy which saw barricades placed under the Paradise Island bridge to prevent customers from parking in front of stalls. The policy was introduced following the murders of two men at the site last month. The men were gunned down as they sat at a stall.

Officers are now mandating all patrons park in the open areas at the entrance and exit of Potter’s Cay Dock and walk to the stalls they wish to patronise.

Lamenting the recent murders, Mr Davis said while the deaths represented a major tragedy, the occurrence should not doom businesses operating at the historic venue.

He called on the government to amend the policy and immediately move to finalise the Potter’s Cay Dock plans left behind by his party.

“(Those were) not the first murders that happened here and business continued and vendors were able to survive,” he told reporters. “The question is, as you would note, under our watch we decided that Potter’s Cay and the vendors area were required to be upgraded. We tried to assist them to ensure that they could add value to their products and add value to their business here.

“Where there was an overflow, the east-end was there for the vendors of Potters Cay, it was not for the sushi restaurants and their customers over there. That was designed for vendors here, because we were concerned about upgrading their facilities, ensuring that we added value to what they were doing here.

“They have, as was as seen and I have witnessed, a number of stalls closed. The government insists on collecting their rents, but again, how would they be able to collect rents when nothing is coming in to them? But I hope that the visit that we are making would highlight the plight of the vendors and get some affirmative action from the government to see how the can curb what is going on.”

He said the PLP welcomes police presence in the area.

“So the presence of the police is a welcome addition to the security measures that should be in place. However, we should balance that by ensuring that it is not enforced in such a way, or that the presence is not such that they are taking a way and not ensuring that business are not maximising their profits. And so I think the need to revisit the issue of parking on the dock,” Mr Davis contended.

“I think the government should consider, having regard to what has been happening, waiving rents for the time being until businesses recover. That’s not a tall order to be asking of them,” he said.

As for the vendors, Dwain “Tall Boy” Bastian, BDAVVA president, told reporters the arrangement has forced many vendors to drastically alter how they operate their stalls, in some cases sending employees home or cutting back on the days they open up for business.

He said vendors have long agitated for more police presence, but never expected the answer to impact their businesses so adversely.

“(This is why) we brought in this team today to help and assist us because the government isn’t actually hearing us,” he told reporters. “We met with the minister, no one is coming to our aid here on Potter’s Cay Dock. Most of the stalls now are closed. You have a lot of people, they have had to get rid of employees… it is just sad to see how Potter’s Cay Dock is right now.”

He continued: “You have some vendors sell seven beers in the space of two days… a man like me, top conch salad maker in the Bahamas, I drop from 150 to 200, 300 conchs a day to 25 conch; so I know it is pretty bad.

“You have the eastern side of Potter’s Cay Dock, you have sushi restaurant, you have Double Dragon, you have other areas, offices inside the area they take up more than 85 percent of the parking lot. We are facing a major challenge now, so we were asking for the government to come and assist us because people here right now on Potter’s Cay dock will have to go to Social Services, probably, in another week because there is no money making.”

Meanwhile, PCFFVVA president Ominique Bowe added: “I understand that Arawak Cay sales have been up from my wholesale guys who bring in conch, Arawak Cay has been ordering conch every other day. Today, there is no conch on Potter’s Cay because all the boats are out but we are not making the salad, Arawak Cay is now picking up in sales, so it is a problem with the parking.”

Both presidents said they’ve heard of plans to have Potter’s Cay Dock privatised in the coming years — with the government considering several options to “transform” the area.

When asked about the plans discussed with him, Mr Bastian said: “They already called some names of persons who wanted to invest into Potter’s Cay, and I can guarantee you that we are going to need the whole Bahamas to stand with us on this one.”

He added: “This is headquarters and I don’t think it is fair to have foreigners or other people take over our country. We have to stand together on this one for Potter’s Cay Dock. We are not going to let this go easy. Trust me on that.”

On the same issue, Ms Bowe suggested that plans are in the works to frustrate vendors to the degree that they would opt to leave.

Referring to the proposed development of Arawak Cay, she said: “It’s a slap in the face for the big plans for Arawak Cay and nothing for Potter’s Cay. What is for Potter’s Cay? Just give us what was left for us, that is all we want, or come clean and let us know what is going on. Let us know what the plan is, let us know if you are trying to frustrate us so that we can give up and move out and you can do what you want to do.

Did the govt compensate those businesses on blue hill road that closed because of traffic changes?

Also, afaik, these people owe rent from years before the traffic changes went into effect.

The PLP lies dumped on the trash heap of very bad history we all want to forget about. The FNM under Minnis seems headed for the very same trash heap.

Fred Mitchell is the only sensible person in that picture. They know how hot it is? :-

Philip “Gravy” Davis believes the key to a solid business plan is ... free rent. Of course it is.

First off it was a stupid idiotic idea to take the draconian, unnecessary ill thought out action that was done on Potters Cay. And since the vendors and the Bahamian public are the most affected victims, the motive must be ulterior, as has many of the decisions made under this government, especially wby Marvin Dames and Anthony Ferguson when it comes to fighting crime. The decision to raid sleeping communities in the heat of the night in search of mostly street corner drug peddlers who could have been apprehended in a less dramatic, less invasive manner. If fact most who were captured and arrested were curious persons who were awakened by the noise and the flashing lights and decided to pull out their cell Phone cameras! Can Marvin Dames or Anthony Ferguson say what one single benefit was achieved by these raids except to grab headlines and shout out to the world that the Bahamas has an even bigger crime than it really is? And the Bimini fiasco was even more disgraceful. Fully out of order. Didn’t these two blockheads sit and think of the effects of taking a small military into that stint, sleeping tourist island? These two dummies need to go and study up on the people who are advising them. This is what they do to successful, Black communities in their own country. In fact the only air attack in America where citizens were actually bombed and killed was a black city, only after it became too successful. So they use crime as a smoke sereen to create a dual economy here. And as the economy booms, the foreign businesses flourish and the Bahamian businesses pay all the taxes. They don’t want the Bahamian entertainers, the night clubs, the jet ski operators, the hair braiders and now Montagu, Potters Cay and Arawak Cay is under drive? What really happened at government house that fateful night? Were military helicopters really ? Fix Potters Cay and don’t let the greedy foreigners force you to close it down. History says Blacks in Africa helped capture other Blacks to sell them into slavery. So now you see it happening today in The Bahamas with your own two 👀 eyes.

Can the Potters Cay vendors maybe help and clean up the area a bit and go to the Government with an alternate plan which can work. or should Government just go back to how it was and wait for the next crime to happen, and be slammed by the public for doing nothing. Dammed if you do and dammed if you don't.

On the Family Island I live on I stopped at the bus stop yesterday to throw some trash from my car in the garbage can there .We have no bus service here and the stops are mostly used by school children waiting on the school bus .They are stops w a roof and a bench and about 3 foot high sides .I could not believe the amount of trash in the little structure w an empty garbage can 4 ft away .Weeny cans , chip bags , juice pouches , soda cans ,,all strewn over the floor and under the bench ..I,m nearing my sixties ,,we are going backward as a people .

... going backwards? We been dere for a while!

Of course the drop in conch salad sales can have nothing to do with all those food poisoning cases a couple of months ago, or can it?

What an idiotic statement to make. Sorry Davis, but you own that pearl of stupidity.

Of course the PLP wants to give the shite away for free so they can get votes.... they ain't had a convention yet (have they?) but they ready to start spreading shite to get votes in the next election....