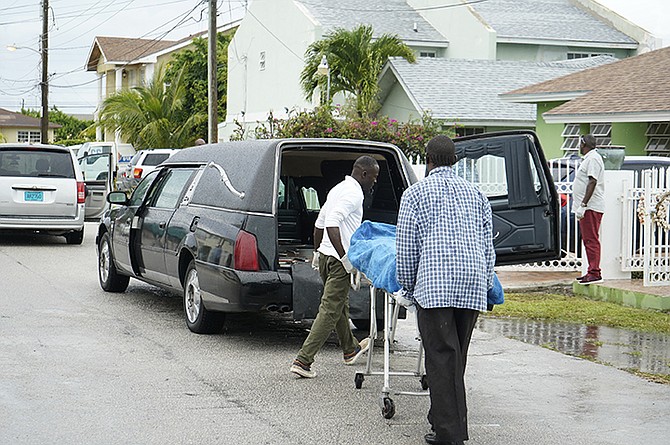 A body is removed from the scene in Star Estates.

IN less than 14 hours, three people were killed in two separate shooting incidents in New Providence, police have confirmed.

The first murder took place on Thursday shortly before 11pm off Soldier Road. One man was pronounced dead at the scene.

The second incident was a double homicide, which occurred shortly after 12:30pm on Friday in the Star Estates subdivision off Prince Charles Drive. Two men were shot dead in the front yard of a house.

Chief Superintendent Solomon Cash said the two victims were getting out of a vehicle outside the house when two people emerged in the yard and opened fire. 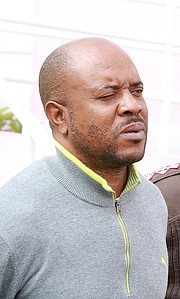 The Tribune understands one of the victims to be Ian “Irie” Porter.

The investigations into both matters are ongoing. CSP Cash added it is too early to say whether these incidents are connected.

“According to reports, shortly before 11pm, the police were alerted to reports of gunshots in the area of Calvin and Linkford Streets off Soldier Road,” police reported of the first incident.

“Shortly thereafter, the lifeless body of an adult male was discovered lying on the ground at Linkford Street, with injuries. Paramedics were called to the scene and attempted to revive the man, however he was pronounced dead at the scene.”

Regarding the second incident, officers initially reported: “Police are presently on scene of a double homicide at Star Estate off Prince Charles Drive. Two adult males are confirmed dead.”

“Once the officers got here, they met two bodies that were lying on the ground in a yard just to the rear of me. And those officers summoned EMS who came to the scene, examined both victims and pronounced them dead.

“We launched a comprehensive investigation into this area, but the only information we are working with thus far is that shortly around that time I mentioned earlier, two persons emerged on a yard and they approached two victims who were exiting the vehicle just parked beyond me. They opened fire on both persons, subsequently shooting them. They succumbed to their injuries.

“We are appealing to members of the public who live in this area, who may have been walking in the area during the time of the incident, to contact the police with any information they get at 911/919, or the Central Detective Unit at 502-9991/2,” he said.

The Tribune understands the home was the residence of one of the victims.

CSP Cash said the motive behind the latest murder is currently unknown. He approximated both victims to be in their 40s, and noted one of them is known to police.

When asked if the victims were related, CSP Cash replied: “We don’t know that, we can say from our information that we suspect they were riding in the same vehicle.”

He added it is too early to confirm whether Shotspotter technology was used.

He also appealed to any citizens whose private surveillance cameras may have picked up "anything concerning this incident” to please contact police.

"He added it is too early to confirm whether Shotspotter technology was used."

Please, people miles away heard those shots. It sounded like a transformer was sparking. Exactly like it. Stop start stop start...and sparking for a very long time. Shotspotter is really only relevant in remote locations. "Unless" you have it hooked up to cctv so you can see which direction the culprits made good their escape

True ThisisOurs shotspotter won't do anything to stop murders. It's more useful after the fact. If you have CCTV in place it may give you an idea who did it.
But our police, being our police, I highly doubt they will immediately go into action to try to find the culprits. CCTV is also lacking greatly.
The shotspotter tech is not the best for this island I believe. Other technologies may have been more worth the investment.

Btw is this directly opposite wendys drive through....at lunch hour? If so why would the reporter even ask the question about shotspotter? There must have been a million witnesses not counting all the wendys staff peeping through the window.

I am sorry to hear about the loss of life to violence. But I must ask how is NoGames counting coming along.?? The heartless one.

How come I don't hear Brave calling for an independent investigation? Those guys are such hypocrites.