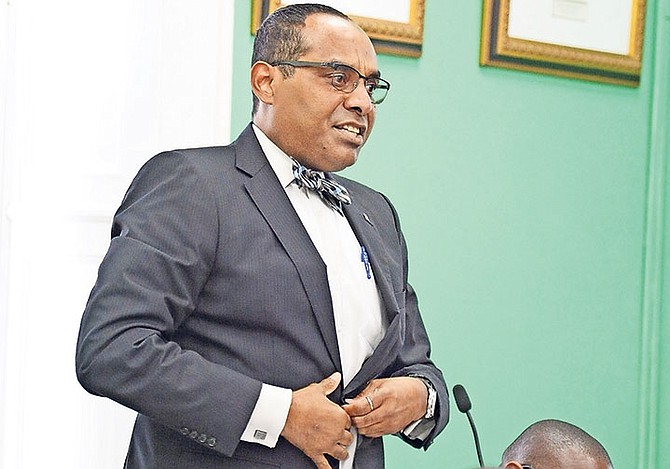 ENVIRONMENT activists are angry at Environment Minister Romauld Ferreira, who they say told them last year there was no chance the Minnis administration would move forward with offshore oil drilling.

The promise, given during a closed-door meeting with advocates last May, has attracted new attention in the wake of the government’s recent decision to approve several new exploration licences for Bahamas Petroleum Company (BPC).

For his part, Mr Ferreira yesterday said his comments last year were in line with the government’s decision not to issue any additional exploration licences.

He told The Tribune all current arrangements with BPC are in line with legacy agreements made between the petroleum company and the former Christie administration.

“What I said was said in relation to new licences to ventures unrelated to (BPC),” he said.

Several environmentalists are now calling on Mr Ferreira to address why he misled them.

According to the activists, Mr Ferreira told them the Minnis administration was not prepared to move forward with offshore oil drilling at all and that Cabinet had agreed it was not a position the government would move forward with.

ReEarth President Sam Duncombe said she was shocked to learn of the government’s shift, insisting the “silence” by Mr Ferreira over the role he played in conveying a false position speaks volumes about the Minnis administration.

“Absolutely,” she said when asked if the meeting had taken place. “Yes, it did. So many of us were there,” she added.

“There (were) at least 15 to 20 people in the room. When I asked him directly about the pending leases, he said he was not at liberty to discuss the leases. I asked what is the point of this announcement if those leases are still on the table? He regurgitated the mantra about he’s not able to discuss.”

She continued: “The other thing that I found odd was that no press was there — no public announcement — one would think given all their screw-ups (at that time) they’d want a positive story.”

Mrs Duncombe questioned if Mr Ferreira was used as a ploy to pacify environmentalists while the government orchestrated something else behind the scenes.

She insisted that answers needed to be given and done so publicly. “Oil exploration carries huge environmental costs. Seismic testing can injure and kill whales, dolphins, turtles, fish and corals. Drilling dumps drilling mud and other harmful chemicals into the ocean and can smother reefs,” Mrs Duncombe contended.

“This level of hypocrisy seems to be the mainstay of this government,” she added, referring to Mr Ferreira’s work in Marathon before the 2017 general election.

Before being elected to Parliament, Mr Ferreira gained attention as a voice for Marathon residents who had been adversely affected by the 2015 Rubis gas leak.

“…This is such a gross departure of the things he said before he got sucked into this party line mess,” Mrs Duncombe asserted.

Last week, in response to criticism over the government’s decision to issue new licences to BPC, Mr Ferreira said the government was compelled to act in a legally responsible way.

Responding directly to that comment, Save the Bays Chairman Joe Darville in an interview with The Tribune accused Mr Ferreira of not being “truthful.”

“It’s a crying shame that we’ve come to this. The same man that sat in front of us and said this thing would not come to be, he’s now out here presenting the government’s legal responsibility?

“Why speak to us at all? Why go that route to sell us the idea that something good could come out of this, just to come back and run this down our throats?” Mr Darville asked.

Recalling the meeting from last year, he added: “It was a tremendous amount of joy and celebration because we thought finally, a win for this country. We were asked our thoughts and everyone went into detail on why they had issues.

“Mr Ferreira opened his mouth and told us… he ended our worries.”

“Now, the same man? Him? He didn’t even come back to us you know. We heard the news from the petroleum company. That’s who announced that the Bahamas…an entire independent nation was going about oil exploration, a company that we thought we had heard the last from,” Mr Darville said.

“A crying shame if there has ever been one.”

According to the information received by The Tribune, the meeting between Mr Ferreira and the group of environmentalists took place on Thursday, May 17, 2018 at 2pm at the Ministry of Housing and Environment’s Charlotte Street office.

Environmentalists were not told of the meeting’s purpose.

They were only told of its time and location, and given three business days to confirm their attendance.

A third environmentalist laughed when contacted by The Tribune for comment, calling the situation “evidence this government has no idea what they are doing.”

Asking not to be named, the environmentalist said The Bahamas was in need of “a better class of politician.”

“This is just the latest in a line of matters where these politicians say one thing and do the complete opposite,” the activist said.

It must be revealed if any FNM MPs have received shares in BPL. This could inspire insider trading and corruption. Oil often is followed by corruption.

this must be why the plp, and now all a dem politicos, STINK of oil money....

When oil is found in Bahamas it will solve a lot of this countries problems. Look at the oil country of Norway - the kindest, least corrupt country on earth. Oil can improve the lives of the poorest and most vulnerable. If the people firmly support good government, responsible management, oil is a blessing no doubt. Why do these rich lifestyle activists want to stop the Bahamas people's big opportunity?

Yeah fred give these greedy flockers more money? they've already proven that all the bible lessons about temptation were pointless what's more money gonna do?

Comrade Freddy 111, you needs put on your tin foil protection helmet and stop listening that always calling into talkies shows Rutherford guy, and entertained much too frequently by talkie host Juan, with their tin foil strange prosperity solutions for the asking ............ Then there's the oil producing Trinidad and Tobago (T & T) has but a GDP per capita of around $14,000, whilst we '"no oil thank you Jesus" Colony of Out Islands, is ranked as the most wealthiest of Caribbean countries with a GDP per capita of $21,280, yes, no?

Amen. These dunces have no idea what they are wishing for. We are blessed to have an economy dominated by international services. Let them move to Trinidad and Venezuela for one week and they will come squealing back home like a bat out of hell. The problem is the majority of people commenting about how we are so bad in the Bahamas etc. have never been further afield than Miami so they have zero idea what they are talking about.

The majority of the public are in favour of oil drilling - they want change in the Bahamas.

The seismic was done years ago... what’s the point being raised?

We want the jobs and revenue. My resume is ready to hand into BPC when they get ready to drill.

If we wanted revenue we would have an income tax on those with high incomes, like every other country in the frigging world. We would also enforce and collect property taxes on foreigners which stand in the hundreds of millions uncollected.

Yes, yes and more yes's we Colony of Out Islands are not in need foreigners tell us locals how earn lots monies when over many, many years our people have a proven themselves be more than sustaining in the revenue stream producing department ....... unfortunately, we keeps electing clueless politicians of similar mindset, yes, no - ma comrade Romauld is a 2017 candidate of poor selection example.... Out Islands have done pretty damn well - dispute how much fuc@edup governance we have long had running we business, yes, no?

The FNM totally and completely mislead every single Bahamian that GAF about the environment we live in - the squeaky bow tie guy turns out to lie like a rug just like the rest of them in that pink house down town... OBAN, these bloody cruise ships trying to out do each other with their private islands and now drilling for oil? How's a tourist supposed to skin dive through all the crap? They (since for ever) can't even keep Nassau harbour clean but they think they can manage and control big oil? You think you going to teach "d" average bahamians chemistry so they might come close to being a toilet cleaner on one of these drill rigs? Wear overalls instead of a flowery shirt to serve drinks to our masters? Thanks for nothing again Government of the Bahamas....

nds were own by the british long before.we were brought here,and i see no where they gave it to us,you dont walk into the hospital have a bunch of children ,then declare that you own the hospital.fred knows that,,your being swinged and theyre all in on it.

They lied about VAT then they increased it 60% they lied about BAH MAR and the spy bill So why should they tell this crew the Truth..

In the FNM Government brilliance they will take away the plastic bag. then explore for oil and give the people of East End a oil refinery. OBAN How smart is that.

This is still going to be great news for the country if it goes ahead. I heard the drill is nearer to Cuba anyway.

its good to see the government giving the green light to such a major project for the country. As i have said earlier, mist people are supporting a drill for the obvious benefits it will bring.