Bpc Deal Had Govt Over A Barrel 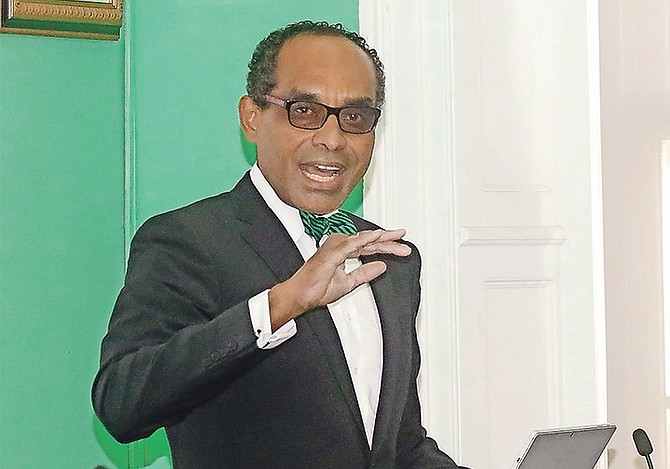 The Bahamas would have been “on the hook for hundreds of millions of dollars”, and its credit rating endangered, if the Government had halted Bahamas Petroleum Company’s (BPC) oil exploration.

Romauld Ferreira, minister of the environment and housing, yesterday reiterated to the House of Assembly the Minnis administration believed this nation would have paid a heavy price for failing to renew BPC’s licences and/or not provide it with the necessary approvals for its Perseverance One well.

Suggesting BPC’s licences and agreements were legally watertight, and could not be broken without inflicting a further substantial cost on already-strained Bahamian taxpayers, Mr Ferreira said The Bahamas would have faced “far greater” liabilities had the Government blocked the well’s drilling.

Acknowledging that the Government was “on the hook legally”, Mr Ferreira was unable to later give Tribune Business a precise figure for the damages BPC may have been able to claim if its activities were blocked.

However, he described it as “significant” and potentially reaching nine-figure sums. “The best person to disclose the exact quantum would be the attorney general,” Mr Ferreira told this newspaper. “They were [legal] opinions sought by his office.

“It’s in the order of tens of millions, hundreds of millions of dollars. It’s quite significant.” As to his earlier assertion that The Bahamas’ sovereign credit rating may have been endangered if BPC was halted, and the question of compensation arose, Mr Ferreira added: “There are those implications.”

The Bahamas’ sovereign credit rating currently lies below ‘investment grade’ at so-called ‘junk status’ with both Moody’s and Standard & Poor’s (S&P). While any BPC damages claim may not have adversely impacted the rating itself, given that it cannot sink much lower, it would have represented another significant liability for a country already faced with record debt and deficit levels.

The advice provided to the Government also concluded that it, rather than BPC, was responsible for the latter failing to fulfill its licence and well drilling obligations due to the long wait for the new regulatory regime, which ultimately ended when the former Christie administration passed the Petroleum Act and accompanying legislation in 2016.

Mr Ferreira yesterday renewed attacks on that administration’s dealings with BPC, which he said produced “probably the worst arrangement in the history of oil exploration” when it came to the Bahamian people receiving a fair and equitable share of the returns from any commercial oil discovery.

“The Bahamas is down there with the lowest,” he blasted, producing a chart that he alleged showed this nation receiving the smallest returns of any oil producing nation. “What does this mean? We were bound and obligated by a pre-existing arrangement we met in place that was probably the worst arrangement in the history of oil exploration.

“We’re not the average, we’re not in the mean. We’re the lowest.... These are natural resources and we ought to get the best deal. That deal was so horrible that the principal officer of the oil company said publicly he would be willing to re-negotiate, take a second look. That’s how bad it was.”

Mr Ferreira appeared to be referencing, although this was not confirmed, the same Commonwealth Secretariat report that Carl Bethel QC, the attorney general, used to argue that The Bahamas would receive “abysmally low” royalty rates that are the world’s poorest.

He told Tribune Business in December 2020 that the Bahamian people were in line to receive the lowest return of any nation on their country’s potential natural resources as he blasted the former Christie administration for ignoring studies suggesting it should revise an oil royalty structure that was “in the pits”.

Disclosing the findings of a Commonwealth Secretariat report that showed, under the present structure, the highest royalty rate BPC will pay is some 20 percentage points below the lowest rate in other jurisdictions, Mr Bethel argued that the former government missed the chance to negotiate a better deal for the Bahamian people when the leases for the oil explorer’s five licence areas came up for renewal in 2015.

]The attorney general then argued that the former Christie administration compounded that error by allowing the royalty rates to be based “on the net value of extracted petroleum”, which is the value after BPC has deducted all its production and investment costs, rather than on “gross tax at the well head” in accordance with international best practices.

BPC’s commercial terms with the Government involved a ‘sliding scale’ of royalty fees, with the rates tied to production (the daily volume of oil, measured in per barrel terms) that is extracted from Bahamian waters. The rates ranged from a low of 12.5 per cent for 75,000 barrels per day to a peak of 25 per cent for 350,000 barrels per day or more, with a production licence granted for 30 years.

Simon Potter, BPC’s chief executive, previously pledged that the oil explorer would “pay double the royalties that the law provides for” to the Government should it strike success. However, as Mr Ferreira noted yesterday, that did not happen with Perseverance One.

“The fact of the matter is that we’ve been drilling since 1947, and have drilled six wells,” he added. “The only thing significant and remarkable about this effort is the depth they were able to go to with modern technology. It created a lot of excitement, but here we are.”

Mr Ferreira argued that The Bahamas needed to know whether it possessed extractable commercial oil reserves to give it a potential bargaining chip to obtain “offset credits”, or financial compensation, from neighbouring countries such as the US in return for not pursuing oil production.

“Certainly I think that the broader discussion that really needs to be had is that if we don’t know whether or not we have oil resources, then we really have no quantum to bargain with in getting offset credits,” he explained.

The minister said South American countries had received such credits, or compensation, for not cutting down their rain forests to make way for new industries in response to pleas from other countries about the harm this would inflict on the whole planet.

Arguing that The Bahamas may have been able to do similar had BPC discovered commercial oil quantities, Mr Ferreira said the company now has to make the next move in determining whether it will seek to renew its five licences by the end-March 2021 deadline.

“We have to wait and see if there are any new applications,” he added. BPC’s five licences expire at end-June 2021, and the oil explorer has yet to give a definitive position on whether they will be renewed.

BPC said the decision hinges on a full analysis of the Perseverance One drilling results and, reading between the lines of its recent statements, whether it can finally secure a joint venture or ‘farm-in’ partner to share the financial, technical and operational risk associated with any future Bahamian exploratory well.

It has repeatedly said it is seeking to “monetise”, or get a return on, its five Bahamian licences by attracting such a partner, indicating it does not plan to raise $120m to invest in another well by itself as the oil explorer’s attention turns to its assets in Trinidad & Tobago, Suriname and Uruguay.

Nothing but political BS from Romauld Ferreira who fully deserves every bit of political grief that comes his way.

How is it Dumbo Minnis can shut down Bahamian owned businesses and order his lowly Bahamian plebes to do this and do that, while conveniently saying he can't put an end to the environmentally dangerous BPC Ponzi scheme?

Dumbo Minnis has proven himself to be no different than Vomit Christie when it comes to pandering to the interests of foreigners while treating the vast majority of us bahamians as second class citizens in our own country.

And let's not forgot that it was that slime ball James Smith who was so instrumental in making sure his sleazy foreign buddies like Simon Potter got such an outrageously sweet deal whereby most of BPC's profits,would go to its foreign investors if it were ever so miraculously lucky to find any oil.

Publish the agreement so we can all see who is telling the truth.

FOIA. Why would such an important document which affects so many citizens and voters be kept quiet? It only leads to speculation of the worst possible case scenario. Am I wrong?

DWW. The government can't approve the FOIA. Can you imagine all the agreements that WSC, BPC, NI, BTC, Focol etc etc. having signed in the past being made public!

Wow, we bloggers would be kept busy for months. Lol, we may need to split up the work. Say someone reviews BPC agreements and someone else reviews WSC.

Wow...thats too much work for the public. Best if Bannister and Ferriea just let us know what we need to know that is in these agreements. They seem completely incompetent to do the right thing.

Opps, don't forget the Bahamasair plane leases at $100,000 a month, or the Dash 8 purchases, or the Defence Force boats from Europe, or the $100 million Shell power plant, or Baha Mar or Hilton...or Lighthouse Point ....wow, there are just to too many agreements to review.

Lets not approve the FOIA and just talk about good corporate governance. Also Minnis has borrowed enough money to feed us all.

There is actually a rumour circulating that the mysterious agreement was actually presented to the former government but never signed and was actually signed by the current administration. They tell so may bald faced lies this is entirely plausible.

This is the same clown that told us that BPC had an agreement with an international oil firm.

Total incompetence at its best.

This Minister with milk on his mout needs to go into the bottom drawers of the office cabinet and start reading on scores of the Bahamas signed on Climate Change Documents and its commitment to reduce its carbon footprint an go green. Some UNFCCC United Nations Framework Conference on Climate Change agreements in 1992 and ratified in 1994, various continuous yearly correspondences, Bahamas Govt document on Bahamas Policy Adaptation to Climate Change about 51 pages March 2005, Bahamas international commitment signed 2016 Paris Climate Change most nations of the world except few. Some of these Bahamas signed documents go way back even to ozone etcetcetc likely before he was born.

Whomsoever have been establishing this oil drilling company 2005 and licence 2006 needs investagations. Its situation of putting the Bahamas over the barrel is looking like the tail wagging the dog, unbelievable.!!!.

The Bahamas honesty and integrity on its signed prior international UN and other world Agreements should be most important to all including the Govt Ministers of the entire nation and whose flag they most times wear on their coat jacket.