He’S Still Out There 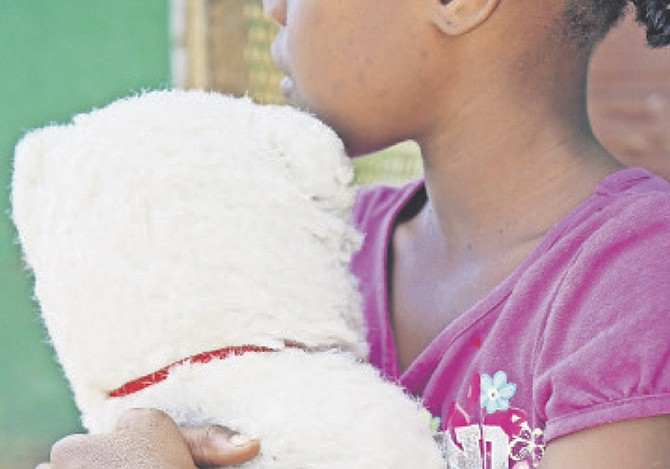 POLICE are still searching for the man who abducted and allegedly sexually assaulted an eight-year-old girl.

The Tribune was told by police sources that investigators are awaiting  a full medical report before they can confirm or deny the occurrence of a sexual assault. However, the child’s mother claims her daughter was violated.

The eight-year-old girl was taken from her home in Culmerville sometime after 1am on Sunday, and later found in the area of Woodlawn Gardens, Soldier Road sometime after 3am. During that time, the man allegedly took the young girl to a home where he violated her and threatened to kill her, her mother told this newspaper.

“I feel like I’m not me anymore,” the mother said yesterday. “I feel nasty, my baby get (sexually assaulted), eight years old.

“Cheaper it’s me, I’m 39,” she continued, “cheaper it’s me, I live little life, she don’t live a little quarter. This hurt me, I don’t sleep just thinking last night, I walking around everywhere, looking in the window, thinking I see the car.

“I always thinking every minute, my son say ‘mommy the man ain’t coming right now you know.’ I say, ‘you never know, he let her go, you don’t know why he let her go.’”

When The Tribune visited the home yesterday, the girl’s mother was visibly stressed over her inability to pay for medical scans for her daughter. The scans were requested by doctors at Princess Margaret Hospital, and vital to her case. She is expected to be seen by a gynaecologist at PMH today.

The scans ordered by PMH cost around $197, and the mother was able to pay for it from a private donation yesterday afternoon.

The girl’s mother said the child has refused to eat following the traumatic ordeal, adding she was still personally struggling to come to grips with the incident as a single parent.

Yesterday, the girl’s mother lamented the state of their home, acknowledging it was unsafe and that their landlord refused to take action. She has seven children, and four of them are minors.

“I lived here for six years, (landlord) never fixed the house. The door ain’t good,” the mother said, “in one kick anybody inside. This hurt me a lot because I’m the mother and the father. Her daddy don’t even know because since I don’t want to be with him anymore, the (four) children are dead to him.”

Reflecting on the incident, the girl’s mother yesterday explained her children were up at the late hour listening and dancing to music with her. She said her one regret was that she allowed them to answer the door.

“I like to keep them up with me on Fridays and Saturdays because it’s only me and them,” she said, “when they go sleep I feel lonely so I play music and they like to dance with me. They kept me up all night, and when 1am came I said it’s time to go to sleep guys, I have to mop.”

The mother continued: “I run them in the living room…I hear the door knocking, I say ‘who is this,’ I ain’t hear nobody and I say ‘girls wait on me, wait on me,’ by the time…I reach by the door the man already gone with my baby.

“It feel like my whole world just crash down on me. I wake up with all kind of pain on me.”

Police had someone in custody on Sunday, but in an update yesterday said the man had been released.

The family claims the man who abducted the girl had asked for her older sister, who was not at home, before kidnapping the child.

“I don’t have nobody knocking on my door for me,” the girl’s mother said. “The one thing is wrong, I do very wrong, to let them children answer the door and the man damage my baby for life.”

Some area residents say the car that took the little girl was a champagne-coloured Jaguar, while others reported a white Nissan Skyline.

The girl’s cousin said a man that matched the description given by the abducted child, had come to the yard on Saturday morning. The cousin said it was the first time she had seen the man, and that when she greeted him, he did not speak, but grunted in response.

The girl’s older sister said yesterday: “I really want this man to come off the road because this might not be the first or the last child he did this to. I just really want that man off the road. All my life I grow up around here – I’m 20 now and nothing like this ever happen to children like this. This had to have been an outsider what come around here and do this.”

The Tribune also spoke to Social Services Director Lillian Quant-Forbes who explained the current process required for those seeking assistance at the department in situations like this, such as bringing in their doctor referral letter and a quote for the medical service.

She told The Tribune the ministry was looking at strengthening its public service announcements to increase public awareness of the services provided by the department.

Acknowledging the PSA’s may not cover all available services, Mrs Quant-Forbes advised the public to visit the ministry’s website for more information.

The girl’s abduction follows an incident in February when a three-year-old boy was taken from his yard and then left frightened and alone outside a Fox Hill washhouse several hours later.

The incident sparked a manhunt for two women believed to be the assailants.

Yesterday, National Security Minister Marvin Dames said the two matters did not appear to be connected based on police investigations.

I feel terrible for the child, but I hope Social Services and the police investigate the going ons in that house!

This man, when found, should NEVER be able to live outside of a prison cell ever again. This child and her family will never forget this event because of this sick bastard.

Yeah, this is really a sick story. That man is truly a MONSTER.

And the police haven't even yet found the champagne coloured Jaguar that witnesses said the pedophile was driving at the time he so boldly nabbed the young girl. You would think we had thousands of champagne coloured Jaguars on our roads all over New Providence. The incompetence of our police force from top to bottom is nothing short of astounding to say the very least. Simply unbelievable! LMAO

*The scans ordered by PMH cost around $197, and the mother was able to pay for it from a private donation yesterday afternoon.*

Why does the victim/family have to pay? I don't understand.

That 'man' is no longer human, he is a savage beast that should face the death penalty or life imprisonment. I hope they find that piece of filth.