One Last Summer Of Bpl’S Torment: Then Cheaper Bills And Power That Stays On 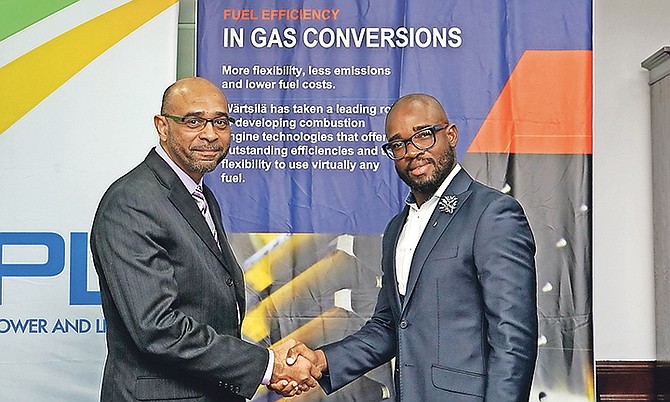 WHEN Finnish group Wärtsilä completes installation of a new electricity plant at Clifton Pier, Bahamas Power and Light Company Ltd would have ended the expensive practice of rental generators and “drastically” decreased the fuel surcharge on consumer’s monthly bills.

As BPL CEO Whitney Heastie made these revelations yesterday, he added Bahamians could also look forward to power generation reliability in New Providence where, for years, customers have been plagued by blackouts and load shedding, especially in the hot summer months.

He spoke during a press conference yesterday at BPL’s headquarters where he announced the company was contracted to install the $95m, 132-megawatt plant, powered by seven high efficiency engines. They plan to finish installation by the end of this summer.

However, Mr Heastie was not able to clearly paint an exact picture of what bill reduction may look like, only explaining the additional mega wattage is about 50 percent of the total peak load experienced in the capital.

He added fuel consumption today is about 80 percent diesel and 20 percent heavy fuel, but the new plant will allow BPL to quickly shift from this model to more reliance on the lesser-used fuel.

Mr Heastie was vague when he was asked how BPL planned to foot the cost of the new plant. As fires which plagued the entity last September happened early on in BPL’s new fiscal year, he said much of the money came from the power provider’s ability to push aside many of its planned capital works projects.

Asked what percentage of the cost was attributed to this decision, Mr Heastie said: “We won’t get into those details.”

He said: “Bahamas Power and Light is pleased to announce that we have a signed a contract with Finnish technology group Wärtsilä to instal a 132-megawatt engine plant at the Clifton site.

“The total cost of the plant is approximately $95m and will be located in the existing station A building at Clifton Pier which has recently been stripped of the four 1980s vintage two stroke engines and auxiliary equipment that have been out of service since 2016. Currently civil engineering works and upgrades are being completed so that station A can accommodate the new seven high efficiency Wärtsilä engines.

“The new plant will be tri-fuel capable of burning heavy fuel oil, diesel oil or liquefied natural gas when it becomes locally available. This operational flexibility of the new plant is an important step to ensuring energy and price security for the Bahamas.

“When this project is completed, customers will see a substantial improvement in the power generation reliability in New Providence and lower fuel surcharge on their monthly billing. The lower fuel charge will result from both the use of more efficient generation along with the ability to burn lower price fuel.

“Additionally, BPL will now own sufficient generating assets to finally close the chapter on rental generation in New Providence which began in 2011. The installation will be completed by the end of summer 2019.”

The new plant will not affect ongoing Shell North America negotiations for a deal to create a new multi-fuel power plant, but instead fortifies it, Mr Heastie said.

“Shell was integrally involved with the selection process. They actually went out and did the tendering for us and they were the ones who recommended Wärtsilä as the entity that should come forth and resolve this power situation for us,” he said.

Wärtsilä was hired on a fast track and as its Business Development Manager Edmund Phillips explained the company plans to finish this project in about nine months.

Despite this, he said the end of summer timeline was hard and fast.

He said: “The engines will be shipped from Italy the end of March. They’ll take about two months to arrive on the island. Once on the island, about four months to instal so providing there is no unforeseen event then yes, we will stick to that.

“So typically a project like this will take about 13 to 15 months depending on the level of civil works that’s involved. In this case we will be building this plant in about nine months because we certainly understand the need for improvement on the island.

“So one thing to bear in mind, even though we are going as fast as we can, safety is of paramount importance for us and we will be as safe as we can during the installation,” he also said.

Mr Phillips further stressed that their intent is to use local skills where possible. He said many local engineering companies were interviewed and selected for civil works.

However, Mr Heastie insisted yesterday there was no one at BPL today who could understand a Wärtsilä engine or is skilled in electro-mechanical engineering.

So is this arse Heastie warning us that BPL will be tormenting us to death this coming summer with wide spread long lasting power outages? Is he for real! People on New Providence become very nasty and even go crazy when they can't get any relief from the unrelenting and debilitating summer heat.

The noise and toxic fumes from generators in my neighbourhood during power failures is unbearable. Oh well, looks like I had better plan on spending another summer at my ranch in Montana with occasional visits to my condo in Toronto. Truly ridiculous that the more fortunate among us must now flee to other countries in the summer because the Minnis-led FNM government cannot keep the lights on. And to think we had hoped the FNM under Minnis would be different from the PLP under Christie. LMAO

Wait, wait, wait. Wasn't it a couple weeks ago we were told that there would be no issues this summer? Now we are told this will be the last summer of outages. BPL obviously has no idea what they are talking about. Looking forward to power cuts to continue for the next 10-20 years, until solar is cheap enough for me to cover my house and never need BPL again.

When you have an addiction to lying, I think you get confused!

LMAO Moxey saying one thing and Heastie saying the next

Mr Phillips further stressed that their intent is to use local skills where possible. He said many local engineering companies were interviewed and selected for civil works.

Someone remind Mr. Phillips that if we had locally skilled engineering resources then we probably would not have our power failure issues.

Wartsila's Caribbean office is located in Puerto Rico according to their web site. If I remember correctly, that country had great difficulty getting its lights back on after a couple of hurricane hits and probably would still be in darkness today had it not been for assistance received from the U.S., albeit on a very tardy basis.

Anyone know if Edmund Phillips is a Bahamian? If he is Bahamian, when and why was he hired as a Business Development Manager by Wartsila? Was Wartsila required to hire him in order to get the BPL contract? Was he hired to spread the upfront contract padding amongst cronies of Minnis and the FNM party? Surely the Deputy Chief Reporter of The Tribune would have considered the answers to these questions to be of some interest to readers. LMAO

Oh we of little faith!

NOT LITTLE FAITH. . .DULLED BEAKED YARD CHICKENS. . .THAT CREW WILL TALK BAD ABOUT ANYTHING. . .EVERYTHING. . .PAY THEM NO MIND. These nitwits are like them driver behind ya at the traffic light who blow their hone the absolute same time the green light comes on. . .ya flip them the bird but then realized that why waste times with this idjit. . .he/she is so dense een worth it to try and reason with them! Ya just move aside and let them carry they dumb sweaty and humid slow moving brain. . . This is a step in the right direction. . .finally someone with some damn forward thinking development around here!!

Faith and respect are to be earned and/or deserved. Minnis and his crew prefer freely obtained wishful thinking from their core D- educated support base.

Looks like we are heading in the right direction. We need this to be successful! Our economy depends on it.

Yes, yes and yes its picture proof obvious why the BPL comrade CEO Whitney. will not be upsetting crown minster Desmond, by submitting Personal bill to BPL's paymaster - allegedly detailing “hundreds of dollars” for official picture taking preparation Hairdo Services. yes, no..... not my place asks bout Facial-Hair do, or would costs be permitted for the private Waxing others possibilities?

Where you is come up with this stuff...lol

If we could export nonsense - even at a cheap rate - we would have no trade deficit.

Promises is the legal tender currency for paying Bahamians.

Just get it right, okay. Hard any hired gun representing comrade Imperial reds to quantify new pledges when they haven't owned up to why previous pledges have not been met, kept, yes, no why not work out deal piggy back off "Free" Ports excess unused kilowatts - sufficiently keep lights and fridges on in 200,000 existing and new Nassau Town's lights out residences and businesses....or better still - why not relocate only Nassau Town's official citizenship count of but 143,333 legit citizens?

My 2 cents is let's hope they are right, if not the summer dem comin...ahahahahahah

I guessed Dr. Dimwit (according to mudder-take-sic) and his team are creating a new and modern Bahamas like we ole and we yong chirrins dem ever seen in we life times. . . 5 to 65 years now. I guess all it ever took to fix is a PM who een connected to SSB conglomerate. The next magic fix will be immigration and high unemployment all at once!! Nearly 60,000 plus Haitians and other nationalities are working legally or illegally in the Bahamas. . .about 40,000 plus Bahamians not working. . .solution is simple. . .issue 20,000 work permits next year. . .reducing as we go. . .eventually to settle at 10,000 per year. . .two renewals allowed then ya go home!!

With all of these investments in fossil fuel power and LNG will we be pulling out of the Paris Climate Accords as our emissions reductions are clearly not going to happen anymore?