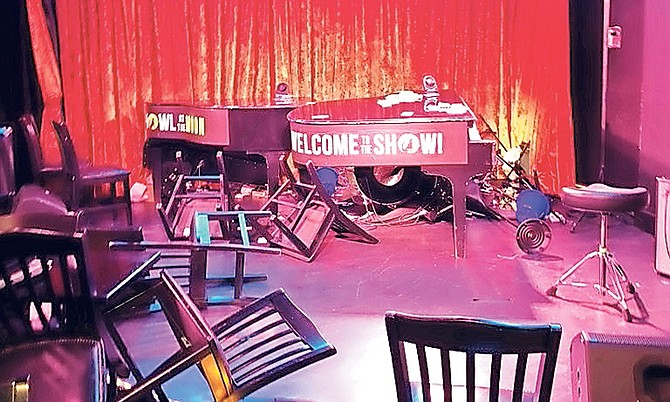 Damage on the cruise ship.

PASSENGERS onboard Norwegian Cruise Line’s Escape are finally getting their time in paradise with stops in the Bahamas, this after the ship was slammed out of nowhere late Sunday night by hurricane-force wind gusts while sailing along the US east coast.

The Escape, due to arrive at Prince George Wharf today, was hit by a 115 mph gust of wind - which is on par with a category three hurricane.

In a recording filmed by Aaron Black, a passenger, a group of people can be seen seated around what appears to be a piano bar when the ship starts to tilt.

In the footage, tables, chairs and other passengers can be seen sliding across the room.

In addition to the sounds of sliding items and shattering glass, several loud screams can be heard in Mr Black’s footage posted to CNN’s website yesterday.

“I remember thinking about how calm it was for sailing out of New York in March and suddenly we got hit by a large gust of wind and the whole ship kind of just tilted to the side for about 30 seconds,” he said in a second video he recorded aboard the ship Tuesday afternoon. “Suddenly everything around me was starting to move.”

In another video shared by the New York Post, dozens of passengers can be seen in a panic as the ship sways from side to side.

A voice is heard off camera saying: “Looks like the boat’s tipping… oh my God.”

The voice off camera adds: “Wow, oh my God. Everything is crashing in the bar.”

Toward the end of the video a female passenger is seen in a seated position on the ground, crying. Several other people can be seen gathering around her trying to give support.

Other videos of the ordeal have popped up all over social media in recent days, with passengers and crew providing their accounts of what transpired aboard the 6,000-person vessel.

“Two years ago, I was on (a cruise): 70 mph winds all throughout the night, just a bad storm. And those two minutes were worse than that whole night,” Boston resident Cam Dube said Tuesday afternoon, shortly after the ship docked at Terminal 10 at Port Canaveral.

“I thought it was tipping,” he said.

Montreal resident Rhona Pervin got tossed out of the shower in her eighth-level cabin — “the door opened, and the water sloshed out onto the floor.” Another Montreal resident, Jennifer Anthony from the fifth deck, said children and adults were crying after the incident.

“Several injuries were reported and those guests and crew received immediate attention and were treated by the ship’s medical staff. There was no damage to the ship; she remains fully operational,” Norwegian Cruise Line officials wrote in a statement.

The Norwegian Escape can carry up to 4,266 guests and a crew of 1,733. The ship was on a seven-day round-trip cruise that departed from New York on Sunday. After Tuesday’s Port Canaveral port of call, the ship is expected to head on to the Bahamas before returning to New York.

The response was prompted by the report of a passenger on social media, who Tweeted: “The scariest (expletive) just happened on this cruise. Chairs, tables, glass, people went flying to one side of the ship.”

Another passenger gave a harrowing account of the incident on Facebook: “All the plates and glassware smashed on the floor. A lotto machine fell on a lady. Blood everywhere. My mom spoke with a lady today who has been working cruises for 18 years and she said never has anything this bad ever happened.”

Dube said the cabin he shared with his girlfriend, Sarah Rogers, tilted so steeply that it got stuck in place “like a hill.”

“Glass was everywhere. Everything went flying off our counters: the coffee maker, anything we had in the bathroom. Our housekeeper said it was awful outside of our room,” Rogers said.

Bill Hanson, a licensed boat captain from Wrentham, Massachusetts, and his wife, Anitra, were in their 12th-deck cabin when the ship listed without warning.

“My goodness, we heard glass crash and all the noise. Then from there, the boat started listing even more — and that’s when the panic hit,” Hanson said at Port Canaveral.

“We were looking for the life preservers. And I was looking to jump out the window and jump on the nearest thing around,” he said.

“It’s a brand new ship. The captain kept calm. They did their job. But let me tell you, Mother Nature whacked us,” he said.

In tweets addressing the incident, Norwegian Cruise Line, which is based in Miami, noted that an “extreme gust of wind” hit the ship, shortly after it left New York, just before midnight Sunday.

The tweets also noted that several people were injured, with the company noting they had “received immediate attention or are being treated by the ship’s medical staff.”

Norwegian, in the series of tweets, also indicated the ship had not sustained any damage and would carry-out the remainder of its seven-day itinerary, which included a stop at Great Stirrup Cay yesterday.