Mp Mcalpine: I Will Run Again, Nominated Or Not 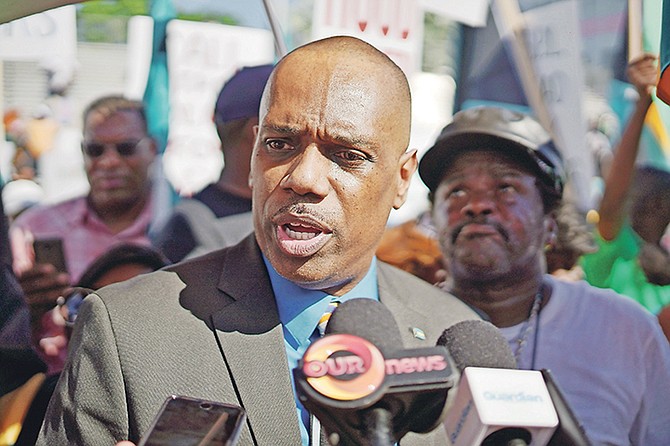 WHILE Fredrick McAlpine appears to be out of favour with the Free National Movement, the controversial MP says he intends to run again in the Pineridge constituency even if he does not get the nomination from his party.

"The nomination at this time is not important, but I do intend to run in Pineridge," said McAlpine.

The outspoken MP has broken ranks with his party on several issues and has been critical of Prime Minister Dr Hubert Minnis on many occasions, most recently about Dr Minnis' failure to address the conduct of two FNM Cabinet ministers relating to the Frank Smith bribery and extortion trial.

He believes the ministers should be treated the same way as he and two other FNM colleagues, who were fired last year based on rules of the Westminster system when they voted against a VAT increase.

But, he also went as far as saying it was "petty" of Dr Minnis not to call his name as one of the future leaders to carry on the party when he retires after a second term in office. Dr Minnis was speaking to supporters at a recent meeting at FNM headquarters in Grand Bahama that Mr McAlpine said he did not attend due to a prior church obligation.

When asked if he thinks he will again receive a nomination under the FNM, Mr McAlpine said: "As it relates to the nomination that is not important. Now, however I run, I am an FNM. If they do not wish to run me, let me say this, the nomination ain't the issue, being elected is the issue. Anybody can get a nomination don't even need a party to nominate you, you can just run and get nominated.

"What my party should be concerned about is not who they are going to give the nomination to and when they going to give it, and who they going to withhold nomination from. What they need to be concerned about is can they win the next general election. I think that needs to be more of a pertinent question, and who do you need to win the next general election."

He also said: "I have a gift from God to which I am grateful and thankful for everyday. And the Bahamian people know me quite well. I can be with or I can be against you but wherever I go trust me I intend to use the gifts God has given to me."

Oh, Joy To The World!

Cry baby sour lime, wash your face with dirty lime. Too much of a cry baby. Not suited for politics.

He is petty for not mentioning him as one of the party future leaders? So what? This MP is a lil too thin skinned for my use. . . "Babyman". . .

Yes, yes and yes I found myself begging be yelling out "AMEN" alongside comrade MP, the Reverend Mc's brungin forward the evidence to all Out Islanders doubters that God does exists and he also has have some kinds a wicket sense humour - cause if out population some 52,600 on entire Colony of Grand Bahamaland's Out Island - he chosen MP, the Reverend Mc to bestow some kinds a special gift upon, yes,no that is some kinds divine spiritual soul trusting.... can't just make such up.

HUH...seriously have zero idea what you posted!

Do you have a 'random word generator'?

Think it has something to do with: "He also said: "I have a gift from God to which I am grateful and thankful for everyday. And the Bahamian people know me quite well. I can be with or I can be against you but wherever I go trust me I intend to use the gifts God has given to me." Am I close, Comrade? Yes, no?

Quite frankly, nobody is interested in the arrogance of Frederick McAlpine. He has the attitude of entitlement just like some PLPs. If he doesn't feel comfortable where he's at, he can go elsewhere where for sure they have nothing to give him. He had his chances and blew it. He needs to shut the hell up and get on with representing the people who elected him to represent them in parliament. They did not make him minister or parl sec. That is up to the PM and if the PM doesn't wish to appoint him and he's offended then he got into politics for the wrong reason.

Whether he is a good, effective MP or not will not be judged on his merit ........ but through the eyes of party politics ....... Only Hubbiggity and Perry were able to live up to that scrutiny back in 1987 because they were not opposed by the FNM and won re-election......... Many others fell by the wayside who ran in a 3-way race.

McAlpine will win re-election under any or no banner. He is a champion of the people. The FNM is on course to lose the next election with their secret $95M generator deals and tons of other secrecy.

Those supporting the FNM on here are only holding on to see what they can personallt get in the next couple years - but they know they voting thumb did already get burn from da torch.

And how many times did "his people" rejected him before he was given a chance by the FNM?? Let him keep on with his thing. . .them DNA won't touch him with a 10 foot pole. . .he is either PLP or FNM used goods. . .they deserve each others dem. . .the DNA need new, fresh and credible blood!!

Maybe the FNM should be praise for finally seeing that that old rundown BEC generator was worthless. I'm not sure, but I think those who pay light bill would be happy. I went to Nassau a few years back one summer and the light was out about 8 hours each day of my 4 days holiday, no open concept homes.... I was pissed. Not use to that here in Grand Bahama. get the new generator, I think it will win some votes ahahah. As for the great McAlpine, he will be another fella who will lose if he tries to run independent. Time will tell. He is an Andrea Rollins in disguise. Not sure any one wants him in their camp.

So where is Travis Robinson