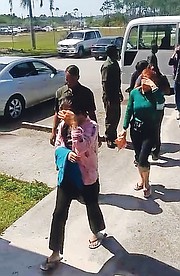 The scenes outside the Freeport court this week.

FIFTEEN illegal immigrants of mixed nationalities were arraigned in the Freeport Magistrate’s Court this week for breaches of the Immigration Act.

They were each fined $300 on both counts or in default, will serve six months in prison.

Haitian Kerlande Cerizier was convicted of illegal landing and fined $300 or in default, serve six months in prison.

Rodelyn Lamour, also of Haiti, was charged with overstaying. He pleaded guilty and was convicted and ordered to pay a fine of $300, or in default serve nine months in prison.

Colombian Melissa Rengifo Barreiro was convicted of overstaying and illegal embarkation. She was fined $3,000 and $300, respectively, or in default serve nine months and six months in prison, respectively. The sentences are to run concurrently.

Magistrate Johnson also ordered that all 15 persons are to be deported on payment of the fines or on completion of serving custodial sentences.

All of the persons paid their fines, with the exception of the Chinese nationals who remain in custody. The others have been flown to New Providence where they are being detained at the Detention Centre to await deportation to their home countries.