DIANE PHILLIPS: He is not a dummy - the life and lessons of Michael Wells

In everyone’s life, there is someone who changes you. For me it was Michael Wells. Michael was born with cerebral palsy, the result of a breach birth. No one expected him to live past the age of 20. In June, I helped him celebrate his 53rd birthday.

Michael is a survivor who has spent his life beating the odds.

With a brilliance disguised by his inability to communicate, Michael had no way to express the thoughts that jammed his brain. To the casual onlooker, he appeared disabled rather than physically dysfunctional. In plain words, he appeared to be less than the rest of us.

In fact, he was more. 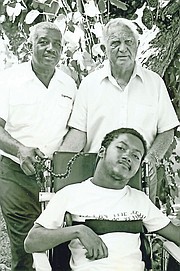 Michael Wells with his father Roderick and the late Sir Durward Knowles.

I first met Michael nearly 30 years ago. He could not speak. He had no control over any motor movements below his neck. He had never put a spoon to his mouth nor pulled a shirt over his head. He was totally dependent upon others, primarily his father, for his daily care.

He dangled by his arms in a hanging chair type device. But when his therapist, the gentle, kind-hearted and patient language specialist Fruzan Langdon from the Ministry of Education introduced us and I reached out my arm to touch Michael’s shoulder, a grin as wide as Montana broke across his face and a twinkle lit up his eyes.

I confess. At first, I felt pity for Michael. Dangling, unable to feed, clothe or bathe himself, unable to experience something so simple as a walk across the room. 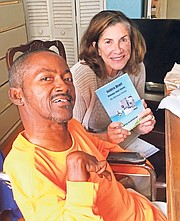 Michael with Diane and his new book.

I wrote about Michael the next day because I couldn’t get his smile and his condition off my mind. And I decided to raise funds to get him a wheelchair and a computer with software for the physically challenged. The late Jim Cockwell, then president of Commonwealth Bank, read the story in The Tribune, called me and said it brought tears to his eyes. Whatever worries he had paled instantly, he confessed, and it made him appreciate how easy his life was by comparison. What can we do to help, he asked? Commonwealth Bank to this day is Michael’s friend. We opened an account and in a matter of a few months, raised enough money to buy him a wheelchair and a computer.

Experts came from the University of Miami to deliver the new chair. Sir Durward Knowles, always a friend of the disabled, and my husband offloaded and assembled it and set Michael up in his new digs. Try as he might, though, he did not have the lung capacity to mobilize the chair with his breath. Even that was too much for him though he loved the fuss that was being made of him, the photos I took, the attention.

Years later, with advances in technology, using the computer became easier. No longer did he have to poke at one letter at a time with a unicorn stick protruding from a metal band around his head, he had software that allowed him to make contact with a laser beam on his forehead to the letter he wanted to type.

The stories that were buried in his heart began to pour out. His love for his father who cared for him daily, lifting into the tub to bathe and clothe him after a long day at work as a plumber at Atlantis, his memories of his mother who had moved away from her native Bahamas to Canada, the imagination of love stories, even triangles, flowed. With his volunteer editor, the generous of heart Lesley Spencer, he churned out tale after tale.

This month, Michael will publish his eighth book of short stories. His sister, Cheryl, will position him in his newest wheelchair next to her at the parking lot she oversees for the Anglican Diocese across from PMH A&E where friends he has made along the way will pay $10 for a copy. I’ve looked after the funds he has raised. Others have looked after his well-being including his mother who, though distant most of the time geographically, contributes generously to his care.

As for me, I’ve received far more from knowing Michael than I ever gave. Despite constant attention to paying every bill and sometimes handling matters for him on an everyday basis or taking food over to his house on many Sundays or being interviewed for the documentary about his life, “I am not a dummy” by Karem Mortimer, I have grown as a person because of Michael. He taught me that it is not only what you give that matters, but that what you see in the person you are giving to that makes you stronger.

Once I felt pity. Now I feel only admiration. Michael was not born with the ability to speak or control his movements. He cannot feed himself or scratch a mosquito bite that itches. He has never knelt down in prayer. But what he has accomplished is something all of us should heed. Barred from attending a government school, he taught himself to read and write watching Sesame Street. Unable to play sports or have a love affair of his own, he taught all of his “angels” as he calls us, a lesson we should never forget. To take what God gave you and make the most of it. Michael, you did it. You were given a brain and you used it. You were given determination and no one has ever tried so hard to make it amount to something.

You are a wonder and you will always be my inspiration.

When being two-faced could be just the thing

Ever notice that the typical living room has a TV as its centrepiece and all the furniture is arranged so that everyone can see whatever is on it? Given that a TV has a single screen, that means that for the most part even if a living room has three or four walls, seating is on one to two with the remainder given over for book shelves or other less body-friendly pieces.

I was thinking about this partially because our daughter, Brooke, has a furniture and home décor store in Sandyport called Oasis (so furniture and décor are rarely far from front of mind) and partially because I couldn’t sleep (also frequently front of mind) and it occurred to me that you could invent a dual-sided TV with screens on front and back so you could have wraparound view as well as surround-sound. I realize TVs emit heat and the back of most televisions consists of vents. But what if you separated the screens just enough for a chip to direct the heat upwards since heat rises anyway and you installed a mini-fan near the top?

I am not an inventor (obviously) but one day someone will do something like that and all those giant screen TVs that face only one direction will be as popular as mono was after the discovery of stereo. Just you wait and see. Hopefully, by then I will have learned how to get a good night’s rest and leave the inventions to others who know what they are doing. Still, it was a thought.

Look what Cayman is saying about a development plan

Happened to come across an editorial in the Cayman Compass this week when, while editorializing in favour of a proposal to consider a high rise building on world famous seven-mile beach, editorial writers lamented that Cayman’s development plan had not been updated since 1997. Twenty-two years without an update, what a shame.

In The Bahamas, we managed to go more than 300 years without a plan at all.