The Ministry of Tourism’s multi-million dollar marketing deal with Lenny Kravitz is central to the latest flare-up in its ongoing copyright battle with a former Bahamian beauty queen.

Tribune Business can reveal that the agreement with the Grammy-award winning rock artist is the only music licence that the Ministry is refusing to hand over to Khiara Sherman, the former Miss Bahamas Universe, in their ongoing legal fight in the southern Texas federal court.

The ministry’s US attorneys, Hogan Lovells, in a March 15, 2019, letter to Judge Nancy Atlas, said the Kravitz deal’s details were “highly sensitive and confidential because this is an ongoing marketing campaign for The Bahamas”. 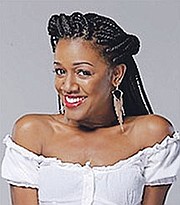 For that reason, they argued, the terms should not be disclosed to Ms Sherman and her attorneys, especially given the gulf between the ex-beauty queen turned songstress and a multi-platinum, Grammy award winning artist who had sold millions of albums around the globe.

Fly Away With Me, the song Ms Sherman claims the Ministry of Tourism used in its advertising/promotional campaigns without permission, is not dissimilar - in name at least - to Mr Kravitz’s 1998 track, Fly Away, which features in The Bahamas’ much-hyped, recently launched global marketing offensive.

Describing Ms Sherman as “a warehouse office manager” whose song has allegedly generated income of $22 across all online streaming platforms in the past five years, the Ministry of Tourism’s attorneys accused her of perpetrating a “conspiracy theory” that Mr Kravtiz’s song had effectively replaced her own.

The Ministry’s sharp response came in reply to a March 13, 2019, letter from Ms Sherman’s attorneys to the US court, in which they requested an Order “compelling production” of all its TV and radio advertising song licences going back to 2014.

The former beauty queen argued that they were essential to her expert witnesses to assess “a reasonable royalty” or damages that she is allegedly due for the unauthorised use of her song, Fly Away With Me, in the Ministry’s marketing campaigns.

“That sole exception is a license with multiple Grammy-award-winning artist, Lenny Kravitz, for a marketing campaign that launched last month. Plaintiffs allege that multiple-platinum record-holder Lenny Kravitz and his Grammy-award-winning 1998 song, Fly Away, are somehow comparable to unknown Khiara Sherman and her unknown song Fly Away With Me, apparently because the songs share two words in common, ‘fly’ and ‘away’.”

The Ministry of Tourism’s attorneys said the production of 18,000 e-mails and documents had shown Ms Sherman’s song was never used in any of its international marketing campaigns, but said their client had offered to produce all licensing agreements signed over the last five years - bar the one with Mr Kravitz.

Suggesting that Mr Kravitz was in a wholly different league compared to Ms Sherman, Hogan Lovells argued that his agreement with the Ministry of Tourism was “irrelevant” to the case at hand because the two were not comparable.

“Expensive discovery into the Ministry’s dealings with one of the world’s most famous artists is not - and cannot be - relevant to damages in this case,” the Ministry’s attorneys argued. “The details of the Ministry’s relationship with Lenny Kravitz are highly sensitive and confidential because this is an ongoing marketing campaign for The Bahamas. The burdens of producing this license far outweigh the probative value, which is completely lacking.

“This allegation does not make sense because a ‘Khiara Sherman campaign’ does not exist, as explained above: Her song played in two intro bumpers aired for four weeks in the summer of 2016, as fully permitted by the agreement she signed. The Ministry’s ‘Fly Away’ campaign with Lenny Kravitz was launched only weeks ago.”

The Ministry of Tourism’s attorneys argued that the only comparable licences were those executed by Ms Sherman for Fly Away With Me, which ranged in value from zero to $500 and $750, and purportedly showed the “lack of demand” for her work..

“Ms Sherman is the office manager of a Houston warehouse, who supplements her income by singing on the weekends at local Houston restaurants. She has had no financial success as an artist, admitting at her deposition that she practically has to pay DJs to play her music, and they often still ignore her emails,” they alleged.

“The song Fly Away With Me has generated a sum total of $22 in revenue across all online streaming platforms over the last five years. Not surprisingly, plaintiff AK FortySeven has never turned a profit managing Ms Sherman’s music.”

However, Ms Sherman’s attorneys had previously argued: “There is no credible argument that the value of licenses that the Ministry has entered into with other artists - to use their songs in international television ad campaigns to promote tourism in the Bahamas - is not relevant in a case about the value of a song that was improperly used in an international television ad campaign to promote tourism in the Bahamas.