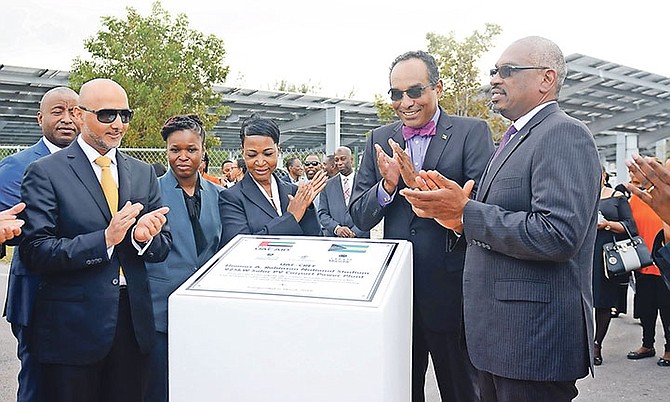 The Official Opening Ceremony of the Solar Car Park at The Thomas A Robinson National Stadium. Photo: Shawn Hanna/Tribune Staff

THE Minnis administration is currently in the process of bringing solar power to Ragged Island – an initiative which will make steps toward fulfilling the government’s long-awaited promise of making that island the first fully “green” island in the region.

Prime Minister Dr Hubert Minnis made this announcement yesterday, also saying the government is embarking on a series of initiatives to bring renewable energy projects to benefit various government schools and the Office of the Prime Minister.

Dr Minnis made these comments while delivering remarks during the official opening ceremony of the solar car park at the Thomas A Robinson National Stadium.

The $4m, 925 kilowatt solar array is the largest solar car park facility in The Bahamas, made possible through a grant from the government of the United Arab Emirates.

The canopy will “displace an estimated 310,000 litres of diesel per year, saving the Bahamian government around US$350,000 and offsetting 856 tonnes of carbon dioxide annually. The project also sets a new resilience benchmark, designed to withstand extreme weather conditions and winds of up to 160 miles per hour,” according to a press release from Masdar, Abu Dhabi’s renewable energy company.

“The vision of the Caribbean Renewable Energy Fund is very much in line with our vision for renewable energy in The Bahamas,” Dr Minnis said.

“The energy generated from these solar panels will feed into our national grid, and as I understand it, will offset some of the electricity usage of neighbouring schools.

“The government of The Bahamas owns and operates rooftops, parking lots and green spaces ripe for multi-purpose usages such as the introduction of solar technology.

“Last month, the Ministry of the Environment and Housing engaged Woslee Construction to begin the roof-mounted installation at the Anatol Rodgers High School.

“The project is now in the procurement stage. Construction is set to begin in the coming weeks.

Dr Minnis also addressed Ragged Island, which was devastated by Hurricane Irma in 2017.

“We are making progress in our efforts to incorporate solar power generation into the Ragged Island electricity grid. This will make Ragged Island the first green-smart island in The Bahamas.

“A techno-economic modeling for the island’s electric grid has been conducted,” Dr Minnis continued. “The proposed solar array and battery storage system is projected to provide 95 percent of the island’s electrical needs. The necessary energy audits of government schools and buildings will commence in short order.”

When asked by reporters for more information on the matter, Dr Minnis replied: “That’s an ongoing process. I cannot give you details at this particular time, but we are progressing.”

Dr Minnis also said the government will be continuing its engagement with the Carbon War Room/Rocky Mountain Institute to stabilise the cost of electricity, increase the resiliency of distribution grids, diversify the local job market, and provide capacity building opportunities for Bahamians interested in getting into the green energy sector.

“We are working diligently to find other suitable grants and partners. We will continue our partnership with the UAE and Masdar in order to expand the use of renewable energy throughout our Commonwealth,” he added.

Yes, yes and yes out blue a Arab stork drops a $4 million, 925 kilowatt solar array solar car park facility on the Colony of Out Islands, seemly all out blue drooped out blue skies above - made possible through a grant from the comrades of the United Arab Emirates, yes, no - whatever happened to PeoplePublic - Know Your Givers (KYG)........ first, gifted by the Chinese government and now powered by Arabs, yes, no?