Face To Face: A Life Lived Helping Us All Learn 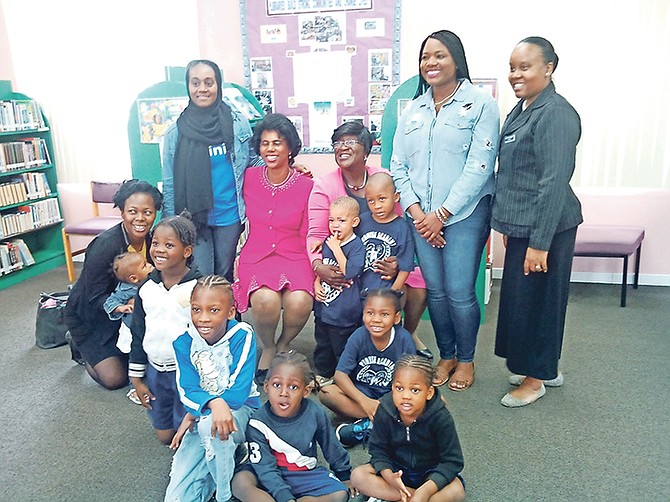 Dorcas Bowler with children participating in reading and reflection for National Library Month.

Why is it that all librarians are similar in personality? I am not referring to the misconception of a fussy old person who hates noise. I am talking about the trend of librarians being level-headed, helpful, resourceful, friendly people with a quiet spirit and gentle demeanour. Dorcas Bowler is the epitome of that description.

When I decided to meet with the Director of Libraries, I didn’t know I was in for such a treat. This well-versed, intellectual woman was also humble with a big smile. She was happy to share a bit about her own life and love for her work as March is celebrated here as National Library Month.

Dorcas has led a stable career that spans nearly four decades. She started out as a teacher, but her career blossomed into library science and she stuck with it ever since.

She was born and grew up in Delectable Bay, Acklins. She was the baby of Laban and Ivy Pearson. Her six siblings were much older when she came along. The family had relatives in Crooked Island and Long Cay, and so she got to do quite a bit of travelling between the three islands growing up. Also, unlike many of the other children of Acklins at the time, she got to spend a part of her formative years in New Providence. Ivy Pearson was a midwife, and she would often accompany Acklins women to the capital to give birth if they did not deliver on the island. She also took up refresher courses in Nassau and as a result, Dorcas spent her primary school years at both Pompey Bay All Age School in Acklins as well as at St Margaret’s Primary School in Nassau. Back then, they would have to travel to Crooked Island to catch a plane to New Providence, as there was no airport on Acklins.

“I remember the beautiful, clear waters in Delectable Bay, and I remember riding my bike to school,” Dorcas says of her Acklins days. “My dad was a mariner, and his father was also a captain. They had their own boat and they would bring food to the island. My father was also a carpenter and he served as the local police constable. I remember the government gave my father a freight truck to deliver food to the settlements (which was a Godsend because the roads were so poor, it was difficult for the far settlements to readily access groceries they needed). It was the biggest and only truck of its kind on the island back then. People were so thankful for him delivering groceries I could never forget the joke he told me. One woman in Morant Bay commented, ‘Mr Pearson, you are so strong! How can you drive that big truck?’ My dad said to me, ‘she must think I carry the truck on my back!’ We laughed. He was an easygoing man. He never worried about anything. I remember him saying, ‘I was born in November, got married in November, and I will die in November!’ That is exactly what happened when he was 69-years-old. 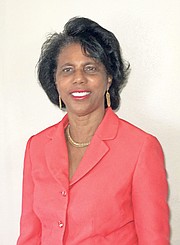 Dorcas Bowler in her younger days as a teacher.

“I enjoyed talking to the older people in Acklins, finding out how they did their fishing and farming and processing cascarilla bark for the making of Campari. Everyone used to get involved in it. Everyone had cascarilla trees; I remember we had several in our backyard. My mom used to love to experiment. She would process cascarilla but she would also make a drink like the Campari with it. She also loved making candies. Other islanders made coconut cake and benny cake and she would do those too, but she would also make candies and people loved that. She lived to be 96-years-old.”

Dorcas was 13-years-old when she was enrolled in LW Young High School. Thereafter, she attended the College of the Bahamas and obtained an endorsed Teacher’s Certificate – she held an Associate of Arts degree from COB and a Bachelor of Arts from the University of the West Indies. She then became a school teacher and taught for many years at schools including Willard Patton Primary School and SC McPherson. She taught many grade levels, but there was (and still is) a need for trained librarians in the country.

Audrey Sherman-Dean, then principal at Willard Patton, had a vision to create a library for the school. Dorcas did a summer course in library science and when she returned, the principal declared Dorcas would open and operate the first library at the school. Teachers and administrators worked together and converted one of the school’s biggest classrooms into the new library facility, and held a souse-out to raise funds. Then, they held a book shower, where parents and students wrapped books in gift wrapping paper and brought them to the school for a special ceremony. Ministry of Education officials were also invited, and the vision became a reality.

Eventually, Nellie Brennen, former Deputy Director of Education with responsibility for libraries, heard about the great work Dorcas was doing with the students at Willard Patton, and had a vision for her to contribute to children’s literacy on a national scale. Dorcas ended up being seconded to the Learning Resources Unit and was able to work closely with the deputy director, who saw an advertisement in the newspaper for commonwealth scholarships. Dorcas ended up receiving acceptance from three universities, two in Canada and one in the United Kingdom. She had recently married and although her husband was born in the UK, he was previously living in Canada. They decided that she would take the scholarship for a university in Canada, which was a three-hour direct flight from New Providence, making it an easier transition for her. For two years, Dorcas lived and studied in Canada with a government award, and graduated with a Master’s Degree in Library Science from the University of Toronto. Meanwhile, her husband, who was once a technician at Sunnybrook Hospital in Canada, had retired early but continued developing his talent as a pianist and also taught private lessons.

Dorcas then returned to The Bahamas and signed a bond with government to work a minimum of the same amount of years she studied, which she had every intent on doing, as she had a zeal to help bring out the best in children through reading. Brennen, she said, was happy to see her return.

“She motivated me,” Dorcas said. “I worked closely with her and when she retired, I continued to do the work she was doing. Finally, in 2012 I was promoted to Director of Libraries.”

Dorcas has watched the library scene change tremendously over the years: “There was much development because technology rapidly advanced. When I was at Willard Patton there was no internet. From 1998, we started working with computers in the libraries. By 2012, technology had increased even more and now we can do so much more with libraries. All 60 libraries throughout The Bahamas are now connected to the internet.”

Although she became director in 2012, she was busy doing important work in libraries for many years prior. She remembers the successful opening of a community library in the Kemp Road area next to Uriah McPhee – a library for which residents openly expressed their pleasure for. In 2001, Carmichael and South Beach communities received newer, more vast facilities. In January 2004, Harbour Island opened the Sir George Roberts Library with the help of funding from winter residents there. Tourists and natives alike rely heavily on this library. In 2004, Elisabeth Estates Library officially opened, making it the easternmost public library in New Providence. Also in 2004, the Southern Public Library was renamed for a dedicated social worker and librarian of 37 years, Lillian G Weir-Coakley.

“A library is very important to a community,” Dorcas pointed out. “There are still homes that do not have computers or internet. They come to the library where it’s affordable. It’s free for students and there are nominal fees for adults. Libraries are also filled with reading material and resources that are useful for studying and completing projects.”

March is recognised as Library Month and a number of activities have taken place thus far. Last March, Barbara Perkins and her group, the International Black Women Public Policy group made a donation at Lillian G Weir-Coakley library and established a reading room there, in Perkins’ name. This year, they decided to host a reflection at the Barbara Perkins reading room, while kids read books donated by her group. The phenomenal story of Perkins and her “life lessons learned around the water pump” can be found at Face to Face with Felicity on www.tribune242.com.

For International Women’s Day, libraries throughout the country displayed photos and bios of phenomenal women, and showed how libraries could contribute to equal rights for women and men as around the world, institutions embraced the theme “Balance for Better”.

‘In the library system, we are looking at how we can contribute to provide information to policy makers to help create balance between the genders,” Dorcas said.

“My goal this year is to attract more males into the profession. This would even encourage more young men to come into the library and make use of the library. If you are not able to travel to other countries, you can read about them, visualise and see those places. Books help you see the world even if you have never left the Family Island. Reading opens the mind and is a form of relaxation. It also sharpens the mind, helps you to grow, and helps you relate to people of all nationalities. Lillian Coakley would always say when she worked with juvenile delinquents, that you can never get in trouble with a book.”

On March 17, the Libraries department participated in a church service at Bahamas Harvest Church to commemorate the month. On the 20th, International Storytelling Day, Elisabeth Estates library hosted an “outstanding presentation, where Laurenne McDonald and her reading group, as well as Tanecia Pratt and Ms Duncombe, young adults, hosted storytelling time for the children of Thelma Gibson Primary School.

At Bahamas Technical and Vocational Institute, coordinator Brent Kemp successfully led the reopening of that school’s library – the Student Success Learning Centre and Library, and hosted an open house. On March 21, staff members came together at the Wulff Road Public Library and shared “stories from my book” – personal stories of their experiences working in the libraries. They included workers from the school libraries, specialty libraries, public and academic libraries. On March 29, there will be a special session on “The Science of Things” for library cadets.