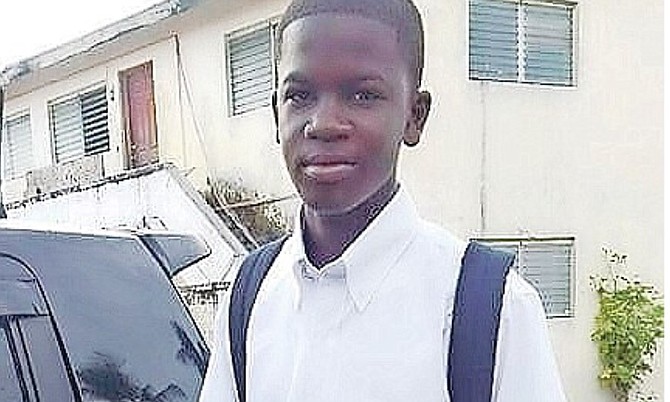 A NINTH-grade student was fatally stabbed yesterday following an incident outside a school with another teenage boy.

The Tribune understands the victim is Perry Louis, a 15-year-old TA Thompson Junior High School student. The perpetrator is said to be a 16-year-old student from another school.

According to police, Louis and the other boy were involved in an argument in the Pitt Road area when “one of the males produced a knife and stabbed the other”. While the fight did not occur at either of the boys’ schools, the violent scene unfurled outside the premises of TG Glover Primary School.

Education Minister Jeff Lloyd yesterday told The Tribune he is “deeply saddened by this tragic occurrence” and “grieves heartily with his family and school community”.

The incident occurred around 4pm in the vicinity of Pitt Road, according to police.

“Police are investigating the circumstances surrounding the stabbing of a juvenile male student, which occurred shortly before 4pm this afternoon on Pitt Road,” Inspector Leonardo Burrows said yesterday.

“The male was transported to hospital and is listed in serious condition. A juvenile male is in custody assisting police with their investigations.”

Unfortunately, a short time later Insp Burrows confirmed that the victim had died of his injuries.

When contacted by The Tribune, Mr Lloyd regretted the tragedy.

“I am advised that a tragic incident involving a public school student occurred around 4pm this afternoon,” he said.

“I am deeply saddened by this tragic occurrence and grieve heartily with his family and the school community that he attended.

“It is further deeply regrettable of the incidences of violence attendant to our young people, particularly our young men. And this ministry will seek every available intervention to address this scourge of antithetical and violent and disruptive behaviour in our society.

The minister reiterated that this incident did not occur on school grounds and wished to underscore to parents that “campuses are safe”.

“Unfortunately in our communities, our youth are enmeshed in circumstances that threaten their vitality, health, and safety,” he noted.

However, in February, a male student at CC Sweeting was stabbed while at school. The boy was taken to hospital at the time and treated for non-life threatening injuries.

Yesterday Mr Lloyd added the investigation is ongoing, saying he will comment further as more information is revealed.

This marks the 18th murder for the year, according to The Tribune’s records.

Why do we expect children to behave differently from the angry, uneducated, emotion driven people they are surrounded by and the violent profanity laced movies they watch?

Common sense, decency and civility are distant memories in this country and the adults are to blame!

Christ you must be insufferable. Shall you strike out the eyes of the children to protect them from as you perceive corrupting media? What hogwash.

Parents have a responsibility to control a child's environment in their formative years to inculcate the positive values the parent wants the child to have. It is the LACK of understanding of that responsibility that has this country in the dilemma it is now in!

NO! You're 'hogwashed' and whatever else washed. Parents have the right to forbade their kids from any medium they determine as undermining, PERIOD! JoeBlow is NOT insufferable, you are not accountable.

I feel terribly for the family. My best wishes to them. No further comment would be appropriate at this time.

No further comment would be appropriate if this were an anomaly, but it is not. Twerking, sex in school and violence (sometimes murder) are far too common among a teenage population that can't read, write or think properly. It is a symptom of a much larger problem nobody wants to talk about!

I talk about it every day on this platform, but now is a time for grieving the loss of this child's life. That only a very few have heeded the words, wisdom, and unbridled genius of TheMadHatter and consequently asked the GG to oust him from office and insert me in his place is a testament to the unwillingness of the majority to seek a solution. But again, those are subjects for another day.

why do you always bring race into discussion.

this story is about sad loss of life , a boy who will never get to grow up.

Pray tell, where is the comment about race? I read the posts 3 times and I don't see any?

No race mentioned or even assumed.

Yes the parents are surely to blame, them and only them are responsible, they created and raised these monsters. It was a time when hearing of a 20yr old in trouble with the law was eyebrows raising news, now it is the norm, and now 15yrold killers are becoming the norm, the Bahamas as i knew it is long gone never to return again ever

...wow, how can you rise everyday with that gloomy fore and overcast? if i were you, i'd leave. i'd never subject my spirit to oscillate in a culture that is the antithesis of who i am; hell no.

We were once one family; held to a high standard in our small community. Now we emulate the selfish a cold nature of countries whose population is 1,000 times more than ours.

Will the reporter go any further?????

Let us all grieve with the family and for our nation! A terrible tragedy.

yes. another terrible tragedy that is all toooooooooooooooo recurring in that country. i don't know why you folks don't jus return to your CROWN. Bermuda did it; Turks and Caicos did it; why won't you guys?

Information is the older student who did the stabbing is a gang member and had being persuing the younger student for a while, even showing up at his school. Unfortunately many students who are confronted in this manner don’t have a father or older brother at home to stand up for them. So as the police force sends home a number of retiring officers, maybe the Ministry of Education May consider bringing them into the high schools, at least, not as security officers, but to deal with student issues that may be threatening their lives or safety. The young men especially, who may be under pressure to join gangs, or may just be getting bullied generally..

Too many (teenage) boys and girls are bullied ....... and keep silent. Parents, guardians, neighbours etc. do not recognize the signals because they do not spend enough "quality time" with their teenagers .......... Phones and computers are bringing them up nowadays.

@John, great idea! Why don't you go there and inform them of your live-saving idea. That'll work!

I am very sorry.

Senseless. My condolences to the young man's family and friends. I grieve for the young man's mother.This incident highlights something that has plague the school system for decades.That is the issue of bullying.Many of those incidents are swept under the carpet and not spoken of.

The women need to stop having baby daddies and start having fathers in their children’s lives. Not only for the boy who was the innocent victim of this crime but for the one who think his head twist on wrong and he could go around taking another life at 15 a16 years old and posting up with gang signs. If both fathers or even one was involved it would not have gotten that far. If the father of the victim was involved he would have approached the bully/ gang boy and say if you have a problem with my son, come talk to me. And for the bully a right thinking father would not allow him to join a gang or bully another student to the point of killing him. Now two lives are lost. Two families are devastated, two schools are affected and society as a whole suffers.

I blame the Minster of Education I blame the Principles of both schools I blame MOST importantly, the parents; especially the one of the decedent.

All the signs of expressed AGENCY required were there and ZERO action was employed. 2-lives permanently vacated. Had the 16-yrs. old murderer been in the USA, he would be on 'Death Row' for premeditated murder. Yes, trailed as an adult and in maximum security.

All the senseless MURDERS that happen in that country is abominable. It's not anything as I I knew it back btwn 1958 - 1968. That country use to be ...ahhhhMAZINGLY awesome! From overseas, since 1968, I've observed, ...watched, the deterioration of that country. I've not been there in decades and have zero intentions of returning. Don't know if that country will ever find its way back from its self-inflicted, self-imposed, abyss. The country has become the murdering fields. SAD!