THE ALICIA WALLACE COLUMN: Welcome words but we need action too 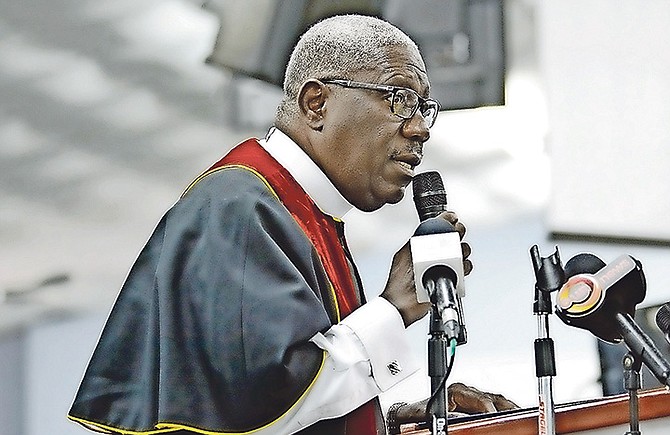 Bishop Simeon Hall recently called on the church to take a stance against sexual violence, specifically including acts within families and marriage. He made a distinction between the desire for sex and the attempt to gain power which leads to sexual violence. Hall also correctly made the connection between the dehumanisation of women and failure to see us as valuable people, noting society must value women in order for sexual violence rates to go down.

We need more leaders of the church to not only “boldly decry” sexual violence, but to implement programmes and policies that address the issue and support survivors. Hall encouraged women to report to the police, seek medical care, and take their time to heal. These are all important to hear, particularly for women who have been taught their wellbeing is worth less than the reputation of male relatives.

Many churches have men’s groups and women’s groups. Are they talking about sexual violence, making a distinction between sex and rape, making members aware of available resources, and advising of the support they can expect from the church and its leadership? They need to do all of this, but also to sensitise members to the issue and encourage them to support survivors and refrain from trying to silence them for any reason, biblical or otherwise.

A troubling part of Hall’s statement, however, was his comment about Bahamian women accepting and promoting “a low self-image of themselves and other women”. It is not clear exactly what he meant, but it appears to be a form of victim-blaming — pointing to women’s own behaviour or beliefs as contributing factors.

Self-image could also refer to sense of self including abilities and value. Again, this is not a cause of sexual violence. It is, however, important to separate perceptions of women (including our perceptions of ourselves) from the value of women as human beings and as contributors to family, society, and economy in a system rigged to extract our labour in excessive amounts without appropriate compensation or consideration to the need for change.

Men do not just need to learn to take rejection. They need to respect women and recognise us as human beings. They need to be taught about consent and agency which is our ability to make decisions on our own. It is critical we all understand consent where agreement to participate in a specific activity is given freely and enthusiastically without coaxing and can be withdrawn at any time, whether or not the activity has started.

Some structures function to limit us and force non-consensual activities such as the belief that men are entitled to the bodies of their wives and wives are biblically bound by a one-time consent rule. These cause harm on multiple levels and are contributing factors in the high rate of sexual violence in The Bahamas. People look to the church for direction, and the leadership needs to stand up and provide it in ways that create change.

Everywhere I went in Istanbul, from restaurants and hotels to convenience stores and specialty boutiques, the people were friendly and helpful.

What The Bahamas could learn from Istanbul

Cities all over the world welcome people to visit, tour, indulge in what they have to offer and they each have unique characteristics. I have just spent a few days in Istanbul, Turkey and could not help but imagine what it would be like if Bahamian islands — Nassau and Grand Bahama in particular — took a few lessons from it and moved to become vibrant cities that capture and hold attention outside of the typical tourist attractions.

Everywhere I went in Istanbul, from restaurants and hotels to convenience stores and specialty boutiques, the people were friendly and helpful. There were definitely a lot of people trying to entice visitors to come into their restaurants, sometimes becoming insistent that they at least look at the menu. We are all too familiar with people vying for tourist dollars in areas of high competition. Aside from that, people seem to understand boundaries. When a visitor had their fill of the conversation, they let it go easily and without offence. When in the mood for more chatting, it is not uncommon to be offered chai without obligation to make a purchase. Store owners enjoy having chai with customers, asking for opinions about the city, and encouraging shoppers to bargain with them.

I stayed ten minutes away from Taksim Square and the busy Istiklal Caddesi (Street) which sees over six million people on any given weekend. It would be inappropriate to compare it with Bay Street, but it certainly sparks imagination as to what could exist in downtown Nassau. There is a very small window in which the street is not completely filled with people. In fact, people walk in the street like it is there for that purpose, and cars rarely bother to try.

Imagine the portrayal of people moving through Manhattan in movies and multiply it by one thousand. That is Istiklal Street — crowds, movement, shopping, buskers and restaurants. Loaded potatoes, kebabs, a broad range of sweet treats, and mastic ice cream are available on every block. From about one o’clock in the afternoon, the street is full of life and does not seem to quiet down until the wee hours of the morning. Even late on a Monday night, nightclubs are open and families are out having dinner. There is something for everyone, so locals and visitors alike spend time walking the length of Istiklal and ducking into the side streets to find hidden gems. A week would not be enough to explore this area that appeals to locals and tourists alike.

In Istanbul, it is easy to pick out a visitor. I kept a map of the Caribbean on my phone to show people The Bahamas because about half of them had not heard of our island nation. Some did not even know about the region, and I quickly realised that Cuba was the best entry point for describing our location. People showed genuine interest in life in other parts of the world, a desire to visit when they heard about other countries. It also became clear many of them had never seen a black person before, and this made for an interesting experience. Some wanted to take pictures, some wanted to touch my hair and some just wanted to know my place of origin. Even with a language barrier, I managed to have some interesting conversations with openly curious people who enjoy hosting.