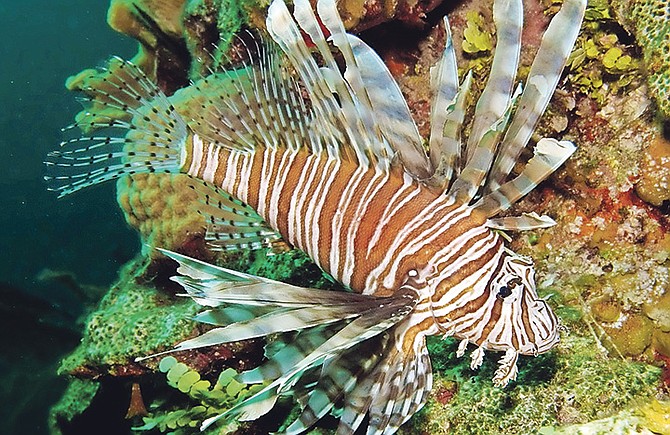 RESEARCHERS have found genetic links between invasive lion fish terrorising Bahamian waters and the species native to waters around Taiwan.

The genetics study undertaken by North Carolina State University was published earlier this month, and could be the answer to how the venomous fish came to infest the warm waters of this region.

Graduate and undergraduate students made genetic comparisons of two native lionfish regions in the Pacific and five invading regions in the Atlantic.

According to New Atlas, researchers used sequenced samples from two mitochondrial DNA genes, and found the best match was between the lionfish in The Bahamas and those in the waters around Taiwan. “Some of these invaders rapidly adapt to new surroundings,” said Martha Burford Reiskind, research assistant professor of applied ecology at NC State.

“What are the genes that allow them to successfully invade? Can we make better predictions so that invasive species like [lionfish] are eradicated before it’s too late?”

There are currently more than one million red lionfish infesting American waters, according to the National Oceanic and Atmospheric Administration (NOAA).

“A native of the Indo-Pacific region, it was unknown in American waters until the 1980s when they began to appear and spread in large numbers,” the New Atlas report read.

“Early DNA analysis indicated that all of the invaders were descended from only a few individuals, suggesting that the fish were the result of a few private collectors dumping their aquaria into the sea.”

The report continued: “However, the lionfish is anything but benign – at least, in the Americas. In its normal Pacific habitat, it’s a placid creature that hunts and is hunted, but the invading fish have both a voracious appetite (not to mention venomous spines) and can lay 30,000 eggs every five days that quickly scatter on the sea currents. Worse, the lionfish will gorge itself with enormous quantities of prey, but has no natural enemies in its invaded waters. It’s also so alien that the native fish ignore it until it eats them.”

According to New Atlas, the research team also probed whether invading lionfish were a hybrid of two other lionfish species. The study did not find any evidence but the hypothesis has not been ruled out.

As stated in the article...these fish started off in high end aquariums and ended up released back into the sea on the Atlantic side, vs the Pacific side from whence it came. It is a highly invasive species and speaks to the dangers of carefree and careless exotic pet owners not taking responsibility for their purchases and their consequences. The same situation is going on in Florida at the moment with the Burmese Python invasion in the Everglades. Starts off a small manageable 'cool' snake to own, that suddenly gets VERY big and then typically just released into the wild. Sadly, it's those individuals that can singehandly cause environmental disasters.

On a side note...catch AND eat as many of those pesky Lion Fish as you can get your hands on. THEY ARE DELICIOUS!! So long as you are careful bring them on board your boat, a quick and simple clipping of the frilly fins and the fish is perfectly safe to handle and eat. EAT EAT EAT and ENJOY!! As it stands now, it's a renewable resource!! Capitalize on it!!

How do fishermsn dispose of the fins? Are the detached fins still lethal?

Should be enough to feed Haiti. Have the captured Dominicans fish them.

They're the only species of fish in our waters today able to tolerate high doses of Carnival cruise ship shiite.