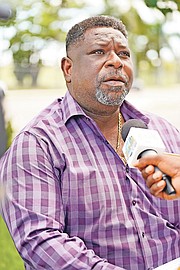 This paves the way for strike action at the water provider.

WSMU president Ednel Rolle and Bahamas Utilities Services and Allied Workers Union (BUSAWU) president Dwayne Woods held a joint press conference yesterday afternoon to express thanks to their members and the Ministry of Labour for the achievement.

The union presidents also confirmed that they both have meetings with the corporation set for May 7 to negotiate key outstanding issues.

For WSMU, this is primarily the signing of an industrial agreement. For BUSAWU, the three major issues include the “failure” of the corporation to “adhere to the promotional procedure,” WSC’s “failure” to post an organisational chart displaying which positions are filled, and the breach of an agreement that concerns union member’s leave from WSC.

Mr Woods, who represents the line staff, told reporters yesterday that he is “going to the table in good faith” and with optimism.

He also said he hopes the present relationship between the union and WSC can be enhanced to the point “where the strike certificate will not have to be used”.

Contention has been brewing between the unions and the WSC executive board for some time.

When asked if WSC executive chairman Adrian Gibson is sympathetic to union concerns, Mr Rolle suggested “ego” is part of the problem and added the chairman “does not see a lot of people as his equal”.

On Monday, Mr Foulkes announced his decision to certify the strike vote for BUSAWU. However, he noted he was seeking legal advice regarding the WSMU strike vote and promised to make a decision on WSMU later that day.

“I had discussions with the Attorney General’s Office, also with the director of labour, and also with the executive chairman of [WSC] to come to a determination. And we thought that that was the right thing to do. But notwithstanding the fact that both strike certificates have been issued, I want to encourage both sides to please sit down and talk, to give a little bit, and see if you can reach a resolution to the issues on both sides.”

Mr Foulkes said there has been an improved relationship between the unions and WSC executives and he is hopeful an amicable resolution to issues can be reached.

During the press conference, Mr Woods said: “It is our hope that we can enhance the present relationship to the point where the strike certificate will not have to be used, as advised by the minister of labour.”

When asked what the likelihood of his union taking any form of industrial action is, Mr Woods said it is “all up to the corporation,” adding his union is “extending the olive branch.”

“But we have problems. And you can’t expect us to extend the olive branch today and then you create a bone of contention tomorrow and then you make it look like the union is the villain.”

When asked if there is a timeline before the union makes a decision to take action, Mr Woods said WSC has already sent out an invitation for a meeting, which is scheduled for May 7.

“I think the ministry looked at the law, when they looked at the law they realised the union is in its rights,” Mr Rolle said. “And what I admire about them is when they [found] out they as wrong, they fixed it and they issued our strike certificate and there’s honour in them. I so hope that the chairman understands what honour is.

“Now, our issue is only one issue: the signing of the industrial agreement. Now I hear the chairman still making his rounds, arguing the point about this industrial agreement. Since our first press statement on April 12, it is now April 30, I’ve only asked him to do one thing: present the evidence to the public.

Keep the pressure on them Mr. Adrian Gibson! Do not give in to these lousy, workers. They are used to slackness and can't handle the pressure that you are giving them just to do their jobs. That is why we are in the state of affairs we are in now throughout much of our country.

Im glad that they finally listed their concerns. 123. Cool. Why WSC wont post an organizational chart is beyond me. I had the same issue when i worked for a different govt dept many years ago.