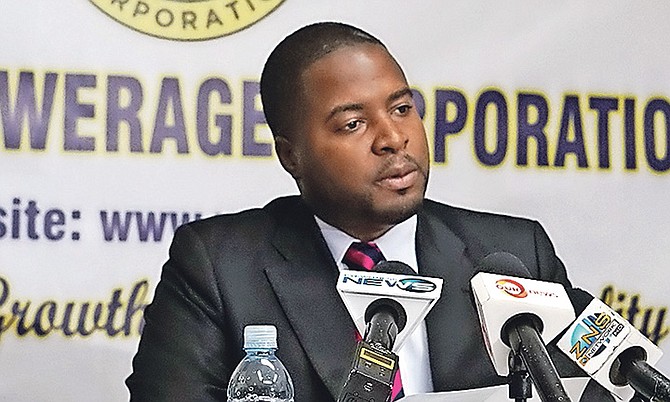 The Water & Sewerage Corporation’s executive chairman yesterday denied a Cabinet minister’s suggestion he had been consulted on the strike certificates issued for both its trade unions.

Adrian Gibson, while declining to comment otherwise, seemingly contradicted Dion Foulkes, minister of labour, by saying he had not been involved in talks on the certificate’s issuance.

This came after Mr Foulkes confirmed ahead of yesterday’s Cabinet meeting that he had signed a strike certificate for both the line and managerial unions representing Water and Sewerage Corporation (WSC) staff.

“I had discussions with the Attorney General’s Office, with the director of labour and the executive chairman of the WSC to come to a determination,” Mr Foulkes said. “We thought that was the right thing to do. Notwithstanding the fact that both strike certificates have been issued, I want to encourage both sides to sit down and talk, give a little bit and see if you can reach resolution.

“The supply of water is a necessity to the residents of The Bahamas here in New Providence and the Family Islands. The prime minister is very concerned over the consistency of the supply of water. There has been an improvement between the unions, the management and the Board, and we would like to see that relationship develop into a very friendly relationship where both sides can reach an amicable conclusion on all of their matters.”

Both unions, bolstered by their strike certificates, yesterday said they would extend an “olive branch” to WSC management, adding that they wanted a “speedy resolution” to their concerns.

Dwayne Woods, the Bahamas Utilities, Service and Allied Workers Union (BUSAWU), president said: “I would like to inform the executives of the Water and Sewerage Corporation that we are in possession of a valid strike certificate and we look forward to a speedy resolution of the the outstanding matters that may have caused this bone of contention. It is our hope that we can enhance the present relationship to the point that the strike certificate will not have to be used as advised by the minister of labour.”

He listed three issues of concern for his union, adding: “There is the failure on the part of Water and Sewerage to adhere to the promotional procedure, as well the approval of two unorthodox promotional listings of which the director of labour would have already advised the corporation to sit with the union and possibly match.

“The second issue is Water and Sewerage Corporation’s failure to post the organisational chart showing positions that are filled and vacancies. The third issue was the breach of Article 14.01, which speaks to the union leave which belongs to the people.”

“You can expect us to extend the love today, and then you create another bone of contention tomorrow and then make it look like the union is the villain. We are here extending that olive branch and we want resolution for both unions.”

“If you have all your data and facts present it to the public and let the public agree with your position. If he fails to do that then do the honourable thing and sign the agreement.”