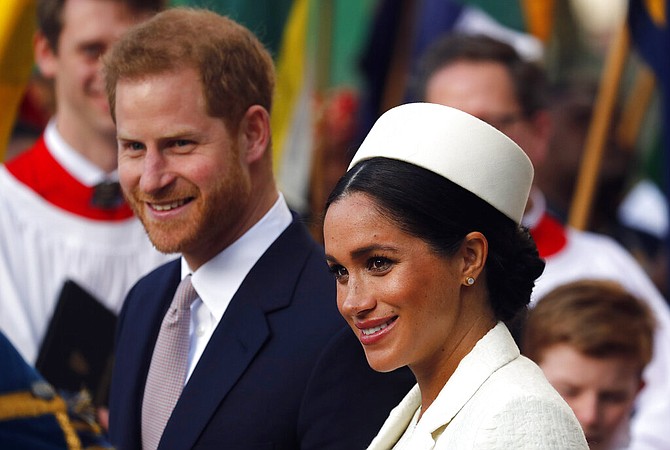 Britain's Prince Harry and Meghan, the Duchess of Sussex. (AP)

Harry says he's "incredibly proud" of his wife and that they have a healthy baby boy who weighs 7 pounds 3 ounces. He has not yet been named.

Harry said the child was a little bit overdue and that had given them more time to contemplate names. He says he is ecstatic about the birth of their first child and said more details will be shared in the coming days.

"This little baby is absolutely to die for," he said. "I'm just over the moon."

The infant will be seventh in line to the British throne and Queen Elizabeth II's eighth great-grandchild. Harry is the younger son of Prince Charles, the next in line to the throne, and the late Princess Diana, who died in a Paris car crash in 1997.

The child will be eligible for dual British-U.S. citizenship if Meghan and Harry want to go through the application process.

Harry, speaking before TV cameras on Monday afternoon was present for the birth, which he said was an amazing experience. The couple has said they didn't find out the baby's sex in advance.

Senor royals have been informed of the birth, as has the family of Princess Diana, Harry's late mother.

I wish them every happiness!

The infant will be seventh in line to the British throne and Queen Elizabeth II's eighth great-grandchild. Harry is the younger son of Prince Charles, the next in line to the throne, and the late Princess Diana, who died in a Paris car crash in 1997.

If they all live as long and healthy as the Queen, it will be a long wait... Congratulations on the birth of a healthy child.

So we are suppose to celebrate the colonial masters? Do they care or celebrate what happens with our children? Sorry, but for me celebrating Massa is over.

Actually it is an interracial couple

.. if you were as prominent as they are, we would be celebrating the birth of your child too!

Prominent? Says who? Royalty is the most anti democratic philosophy ever invented by mankind. Worse than dictators, worse than tyranny, worse than clerical rule; it is only blood line that determines rulers succession. No thinking person acknowledges their existence, it’s only due to Constant media coverage that the world still knows they still exist.
One is either in favour of democracy , freedoms and equality and therefor against royalty of any kind, or one is deluded to the point that they forget where and how the royals got their wealth, and the damage they’ve done around this world. One sic organization/family. “Blue blood” is a concept that exists in the psychopaths mind.
Any thinking person would spit at their feet. There are many lesser evils that we reluctantly acknowledge in our history, however this is the only evil that for some illogical reason is still acknowledged with such frequency. Grow up people and realize what these people are and what they done and that their rein is long since over.