Face To Face: Sam’S Never Stood Still And Always Goes The Distance For Others

I recently met an unsung hero on First St, The Grove – a gem right among the people with a lifetime of giving and serving to share. Those of the generation before me may know his name. But all too often, wonderful people like Sam Williams get lost in the stories of today, when young people could benefit from learning of people like him and find their own way to make a similar or even greater impact.

Sam Williams is known as “the Marathon Man” of The Bahamas. Long before marathons gained the popularity they have today, Sam was running and organising marathons and always for a good cause. He was the top long distance runner in the late 1970s and early 80s. He didn’t just make a name for himself running; he made a name for himself because of his big heart. He utilised his passion for running and love of country to promote many good causes for the benefit of the community. He organised races for heart and kidney foundations, for youth groups and churches all over the country. When Sam ran, he ran with a purpose bigger than himself, and for this reason, others saw his good deeds and contributed generously to the causes he championed. 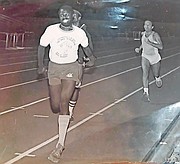 Well-known sports columnist Fred Stirrup wrote of him: “I recall Sam ‘Marathon Man’ Williams during the 1970s. No other has been as successful in distance running locally. There was a time when he was the outright favourite every time he took to the track or the road or the field. Indeed, he was a versatile distance standout.

“The man was a champion on the track, on the road and in cross country. He stayed on top for years. Imagine the dedication, the resolve demonstrated by Williams. I can attest that he had an unwavering spirit when it came to training. Williams went all out at great expense to condition himself, physically and nutritionally, to withstand the demand of distance running. He did not have a personal nutritionist available. He got no assistance from the BAAA (Bahamas Amateur Athletic Association) in terms of his preparation for races. Williams operated in isolation, because of the system of the day. He got no subvention, nothing at all. What he wasn’t able to scrap up in donations had to come out of his pockets. However, he had an iconic and nationalistic outlook. God gave him a talent and he did his very best to maximize the gift.

“Sam Williams was a standard bearer for long distance running in The Bahamas. His resilience and the proactive nature of others of his ilk, should serve as motivation for the parent body for track and field in the country to expand its national development programme.”

To date, the emphasis is still on the sprinters who have shone internationally in World Games, Olympics, Carifta and so many other events, putting The Bahamas on the map for many who may not have heard of us. But there still remains a grand opportunity to nurture and develop the talents of young people with a knack for long distance running - and Sam can prove he still has much to offer to his country. For the moment, he is still chilling in his yard on First Street, taking the time to speak to the young people in his community; but he could be doing so much more. He is still fit and can be seen walking where he has to go when visiting neighbours, going to the store and so on.

Sam is no stranger to teaching children. After graduating from Western Senior High School, he attended Camden County College in New Jersey. Upon his return to New Providence, he taught physical education at C.I. Gibson High School. During his teaching career, he also taught children at what was the Girls and Boys Industrial Schools. On his Bain Town stomping grounds, he rallied the young people together and created the Bain Town Flyers Track Club.

He developed the Sir Milo Butler Memorial Road Race in the 1980s and received support from Mrs Butler and sponsors like the Nassau Cable Beach Paradise Island Promotion Board. When the government of the day was considering naming a newly-built highway after Nelson Mandela, Sam went into action and petitioned until he rallied enough support to convince the government to name it after one of our own national heroes: Sir Milo Butler. He also agitated for the Tonique Williams Highway to be named in honour of the Golden Girl who grew up in the Yellow Elder area. He says the once popular Bahama Games was his brainchild. The idea came to him, he says, because he would travel to various islands hosting sporting clinics, and noticed the massive potential of Family Island students to become sporting greats for the country.

Sam is the founder of the Bahamas Loving Care Association, one which was well-known for philanthropic efforts on a national scale. The association started out with Sam reaching out to people right in Bain Town who needed help. There were homes in need of desperate repair, people living in derelict conditions who needed help. Sam was able to rally government and private agencies to help these people, as he points out, long before Urban Renewal programmes came into existence. 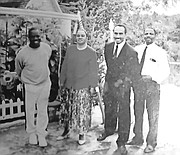 Proud to have made a contribution to executives at the AIDS camp.

Bahamas Loving Care once held a “Celebration of Life” ceremony to pay tribute to the heroes who rendered assistance to passengers of Southern Air after a plane crash. The association, which has been in existence for more than 40 years, held walk-a-thons and bike-a-thons and helped raise money for numerous worthy causes, including sickle cell anaemia, HIV/AIDS, the kidney foundation, the Salvation Army, hurricane relief and disaster relief efforts in Haiti and Africa. The group also held competitions in inner city communities for the best kept home and yard, agitated for stevedores at Prince George Wharf to have proper safety gear, and raised money for poop sacks to be placed in the back of the horses that frequent Bay and Shirley Streets, ultimately making these main thoroughfares much cleaner. On another occasion, Sam and Bahamas loving care arranged for 250 senior citizens to leave the old folks homes and enjoy a full day’s boat cruise and luncheon.

“I just love helping people; I have a calling on me to do the Lord’s work,” Sam said. “My mother died in childbirth. My grandmother and stepmother raised me. I feel I have to give back to the country.”

The father of five and grandfather of five has so much to offer and isn’t giving up. He was active in agitating for sign language experts to take the stage at rallies during general elections. He is currently pushing to see sign language implemented at all major churches so the deaf can receive the messages of the Gospel.

He is the recipient of numerous awards including: inducted by Governor General Sir Orville Turnquest into the National Sports Hall of Fame 1995 at Government House; First Caribbean Unsung Heroes 2007; Marathon Bahamas 2010 Pioneer in Long Distance Running; plaque of appreciation from Sir Milo Butler’s family in 2001; and many others.

Apex Awards called him: “A special man who cares enough to make time for others… someone who knows that giving makes living a pleasure.”

Sam Williams has friends far and wide internationally. He operated a limousine service for years and made an impact on the tourists who came to visit. One Canadian wrote of him on their blog: “In becoming an avid traveller to The Bahamas, I’ve had the pleasure of meeting what I term “beautySpirits”, both Bahamians and non-Bahamians, who exhibit such selfless love and service to the country that one cannot help but view them as marvellous blessings to the Bahamas. One is Sam “Marathon Man” Williams. Sam, a dedicated Bahamian patriot, has involved himself in serving the needs of the less fortunate residents of the country through his work as founder/president of the Bahamas Loving Care Association.

“When a young Bahamian lost her mother and brother through a murder/suicide at the hand of her father, the Bahamas Loving Care Association spearheaded a drive to provide a scholarship for the deserving young lady. When a courageous Bahamian, Victor “Easy” King sacrificed his life in rescuing several children from their burning home, Sam immediately put forth a ceaseless effort (which continues to this day) to have this Bahamian hero appropriately honoured there in his country. Sam is a dynamic servant to the beautiful Bahamian land of his birth and he can always be found working ardently on the behalf of Bahamian citizens in need of a voice, love, and recognition. He is a beautySpirit whose contributions should go down in the annals of Bahamian history.”

A very positive an inspirational article!