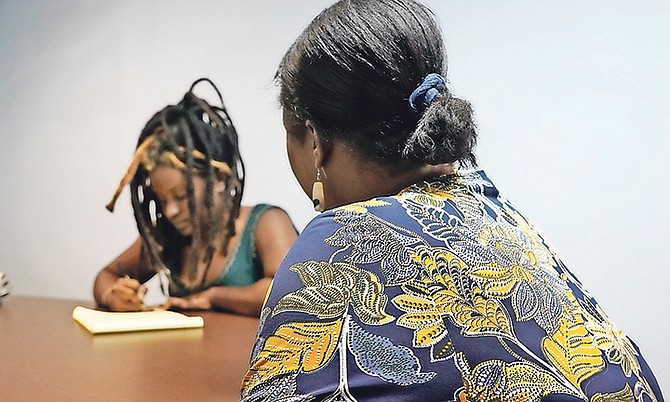 THE government will now have to defend a case it had previously tried to prosecute when a Jamaican woman, who alleged she had been raped by an immigration officer, gets her day in a civil court, years after the criminal rape case was thrown out.

In 2015, mother of three, Claudia Edward Bethel claimed she was picked up in a nightclub raid and held over the weekend at the Central Police Station and the Carmichael Road Detention Centre.

She is married to a Bahamian, and at the time of her arrest said she had a copy of the spousal permit that she has held since their marriage in 2010, However, officials claimed it was an uncertified copy.

The Jamaican Consulate reportedly made two attempts to have her released over the weekend in question, but was unsuccessful.

Instead, Mrs Bethel was released into the custody of senior immigration officer Norman Bastian for a procedural home check and interview at the Immigration Department with another officer.

However, the pair did not make it to the department until after it had closed for the day as they drove around in the senior officer’s truck as he did several errands.

In the government’s writ, it was confirmed the interview was conducted “late afternoon/early evening” by the officer.

“We then left the Immigration Department,” Mrs Bethel’s writ read, “I kept asking when I would be allowed to go home to my children and Mr Bastian kept saying ‘not yet’. He asked me if I knew the names of some very bad men and I told them yes, I have heard of them. One of them known as ‘Death’ and he said, ‘that’s my nephew’.

“‘I also have a licenced firearm,’ he said. I felt really scared now because I felt if I attempted to leave I would be in trouble and he has a gun. I was very afraid so I followed all his commands even while protesting. I really wanted to get home to my children.”

She was then taken to his house where he allegedly violated her several times before taking her home the following day.

That morning, she said she took the condom he used and hid it in her bosom and also recorded the numbers of cameras he had in his room while he had gone to answer the door.

At the time of the allegations, Mrs Bethel was 28 and Mr Bastian was 54.

In her statement of claim, she wrote: “I felt that Mr Bastian would deny that he forced me to have sex with him so I wanted someone else to see me in his company on the morning after so I asked him if he could take me to the Grove Police Station where I had reported my lost spousal permit and he agreed.”

However, Mrs Bethel said she did not report anything at the station because she could not get a private moment alone with an officer and was afraid to report anything in the presence of Mr Bastian. She said she then asked him to take her home, and he did.

In his witness statement, Mr Bastian corroborated most of Mrs Bethel’s account but maintained the sex was consensual and at her request.

“After the interview, we continued to call her husband who never answered or came to the office and I told her that I could not leave her stranded as it was late and she responded that she was afraid to go home because of what she told me and the police,” Mr Bastian’s witness statement read.

Mr Bastian claims Mrs Bethel confessed to prostitution, and further revealed that the Montell Heights club where she was arrested operated as a brothel and strip club.

He said she further confessed that her husband was a former customer, and her 2010 marriage was arranged for her to gain status in the country.

“When I arrived at her apartment,” Mr Bastian’s statement read, “she wanted my number to see me later and I told her that she needed to get her life together and I left.”

Mrs Bethel’s account grabbed headlines in her home country; however, the criminal matter was never put before a jury because Chief Magistrate Joyann Ferguson-Pratt ruled on a no case submission that Mrs Bethel’s testimony was not credible.

During the preliminary inquiry, Mrs Bethel told the court she had recently had an ectopic pregnancy at the time of her arrest and was still on antibiotics, and experiencing discharge.

She said she did not drink wine offered to her by Mr Bastian as they drove around in his truck and only pretended to do so at his request; however, Mr Bastian claims they shared two bottles.

On cross-examination, she admitted that she and her husband did not live together and that she had lived with a boyfriend for several years.

“Upon hearing the evidence of the Crown with particular reference to the virtual complainant,” read the chief magistrate’s ruling, “I found her testimony inherently unreliable. I also had regard to her demeanour in the witness box and concluded that she was untruthful when stating that sexual intercourse was without her consent.”

The ruling continued: “Further, she did not stand up to cross-examination and her testimony was terribly shaken.”

The government did not appeal the ruling, but Mrs Bethel still has a pending civil suit against the government seeking damages for battery, assault, false imprisonment and the breach of her constitutional rights.

The civil case will be heard before Supreme Court Justice Indra Charles on May 27.

For its part, the government has called Mrs Bethel’s claim for constitutional redress an abuse of process that should be dismissed.

In its writ, the government argued that Mrs Bethel’s arrest and time spent in detention was lawful. Respondents added that if the allegations against Mr Bastian were true, he did not act as a servant or agent of the government, and did so “outside the scope of his employment”, and therefore, the state cannot be held liable.