The Peter Young Column: A Time To Bow Our Heads, Remember And Give Thanks 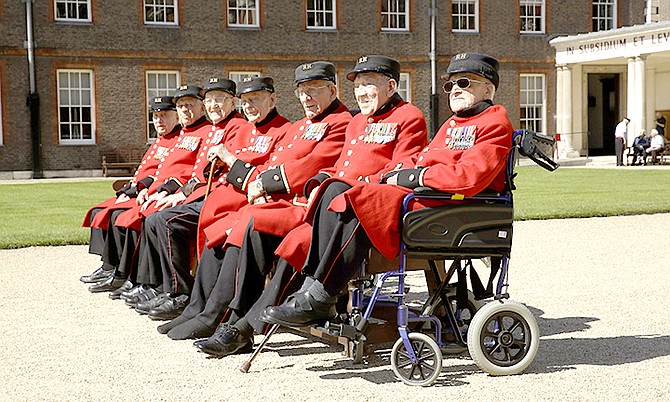 British Chelsea Pensioners who are veterans of the World War II Battle of Normandy, codenamed Operation Overlord, and D-Day pose for a group photograph during a D-Day 75th anniversary photocall at the Royal Hospital Chelsea in London yesterday.

Keeping alive memories of significant events in its history is a mark of a civilised nation. An important aspect of this is public recognition and remembrance of those who lost their lives in war so that honouring their sacrifice should continue for years afterwards.

One manifestation of this is the work of the Commonwealth War Graves Commission which was established by Royal Charter in Britain in 1917 and is responsible for the commemoration in perpetuity of the 1,700,000 men and women of the Commonwealth forces who died during the two world wars.

A recent example in Britain was the national commemorative events in November last year to mark the centenary of the end of the First World War. But it is inevitable that memories fade as old soldiers pass away and new generations emerge with the result that major battles which were famous at the time become more remote in people’s minds. Nonetheless, Britain still commemorates, for example, the two most important battles of the Napoleonic Wars in the 19th century, Waterloo and Trafalgar.

Since many veterans of the Second World War and their dependants - together with numerous other people who were involved - still survive, there are many events associated with that relatively recent conflict. These include, in particular, the ceremonies next month to mark the 75th anniversary of the D-Day landings which led a year later to the liberation of Europe from occupation by Nazi Germany. That historic occasion is both commemorated and celebrated annually on May 8 as Victory in Europe Day (known simply as VE-Day), and it is followed a day later by Russia’s Victory Day to recognise the anniversary of the defeat of Germany which had invaded the then-Soviet Union in 1941.

Furthermore, the anniversary of the lifting of the Berlin blockade, imposed by the USSR as a show of strength, falls in May, and Europe Day, commemorating the establishment of the European Coal and Steel Community, is observed on May 9. This was the precursor of the European Union because it was designed to lock together economically its six founding members, including France and Germany, as a first step to reduce the risk of future conflict.

So the month of May is important in the international calendar, and it has become significant in The Bahamas as well since the last four general elections here have been held during that month. In Britain one cannot escape from all the ‘mays’, so may I say Prime Minister Mrs May may quit before the end of May, or she may not!

The anniversaries of VE-Day and Russia’s Victory Day are significant globally and the difference between the scale and nature of their ceremonies has become striking. In 1995, I found myself leading, at the official level, the civilian side of the British government’s events to commemorate the 50th anniversary of VE-Day and, of course, we reported to ministers for direction and guidance. It was right to give due weight to the military side – not least to recognise the sacrifice of so many lives, both military and civilian. It was necessary as well to remember that at the time of VE-Day the war in the Pacific against the Japanese was far from over. But the events we organised in London and around the country were designed essentially as a celebration of the successful conclusion of the conflict in Europe. The emphasis was on peace and reconciliation in the spirit of Churchill’s famous dictum – In Victory: Magnanimity, In Peace: Good Will.

The events in London culminated in re-creation of the scene on May 8, 1945 when the King and Queen and the two Princesses, Elizabeth and Margaret -- accompanied by Prime Minister and wartime leader Winston Churchill - appeared on the balcony of Buckingham Palace in front of huge and ecstatic crowds. Fifty years later to the day, The Queen together with the Queen Mother and Princess Margaret stood on the same balcony in front of another massive cheering crowd (according to police estimates over 100,000 strong) which reached well down The Mall. This was followed by a fly past by the famous Red Arrows and by vintage WW2 aircraft. It was a moving and unforgettable spectacle.

Contrast all that with this year’s Victory Parade in Moscow and other Russian cities which marked the 74th anniversary of Germany’s defeat. Claimed to be the largest ever such parade in Moscow, it was a massive and extravagant display of military hardware and personnel – some 13,000 troops participating in a lengthy march past – amounting to a demonstration of raw military power; and this was followed by a public pledge by President Putin to keep strengthening the nation’s armed forces. In the past, some in the West tended to underestimate the long-lasting effects in Russia of the nation’s terrible losses during the Second World War – an estimated 20 million casualties together with huge destruction – and they often failed to understand Russian fears of what was termed German ‘revanchism’.

Modern Russia, however, has become a threat. Reportedly, this month’s parade was boycotted by Western leaders because of Russia’s current expansionist policies including the annexation of Crimea, the supply of arms and other support to secessionist forces in eastern Ukraine and its military threat to the Baltic states of Estonia, Latvia and Lithuania. Its support of Assad in Syria and alleged involvement in Venezuela, together with proven interference in the 2016 US presidential election, have also been condemned by the West.

The Victory Parade in Red Square this year provided chilling evidence of Russia’s military capability under a leader who, as a former colonel in the KGB, apparently yearns for a return to the glory days of a powerful Soviet Union on the world stage. So the danger of an expansionist Russia is all too real. 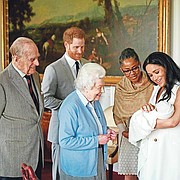 Prince Harry and Meghan, joined by her mother, Doria Ragland, show their new son to Queen Elizabeth and Prince Philip at Windsor Castle.

On a happier note, just about the whole world will know by now that the Duke and Duchess of Sussex’s new baby has been given the name of Archie. Some say that is a shortened version of a famous Scottish name, Archibald, meaning ‘true, bold and brave’. There has been some surprise that a more traditional royal name like James, Arthur or Edward was not chosen.

Everybody will surely wish to congratulate Prince Harry and his wife Meghan on the birth of their son. The media frenzy and worldwide publicity has been extraordinary but perhaps not unexpected as the younger Royals, in particular, are permanently in the public eye. Although some people say that for the Royal Family to continue to prosper it must adapt and become more attuned to modern Britain, public interest in what is known as ‘the Firm’ remains undiminished and its popularity is far-reaching. Perhaps this is because of the naturalness and informality of its younger members.

But the role of The Queen as a symbol of stability, unity, continuity and tradition should never be underestimated. As I wrote at the time of her 93rd birthday last month, she remains widely loved and revered – long may she stay in good health and continue to perform her public duties as an inspiration to the nation.

We can only hope Trump will apply restraint on Iran

The world is apparently in unending crisis. To name a few examples, as well as the menace of Russia there is the resumption of nuclear testing by North Korea, China’s militarisation of the South China Sea and its trade war with the US, endless conflict in Afghanistan, the re-emergence of ISIS now in Libya and West Africa and climate change. But the US dispute with Iran is now seen by many as the greatest danger of all.

Tensions between the two have grown since President Trump withdrew from the Iran nuclear deal last year and he has re-imposed tough sanctions restricting Iranian oil exports. He has also designated Iran’s Islamic Revolutionary Guard a terrorist organisation and has beefed up substantially the US military presence in the Gulf region. Doubtless, the US is responding to evidence of Iran’s aggression in the Middle East, as the number one sponsor of terror while threatening to annihilate Israel. But it seems also to have been influenced by Israeli intelligence about Iran’s continuation of its nuclear programme in contravention of the 2015 deal.

As the rhetoric is ratcheted up and Iran refuses to be intimidated, the danger of miscalculation or, for example, an Iranian attack on US commercial shipping that would provoke American retaliation, is surely increasing. So there is a serious risk of conflict by accident that could have catastrophic consequences.

The US administration has stated publicly that it does not want military conflict with Iran but it has not ruled this out. While critics accuse Mr Trump of being impetuous and impulsive rather than exercising calm and reflective judgment, many thought his officials would curb his excesses. According to reports, ironically it is now his advisers who are pushing him towards confrontation with Iran. 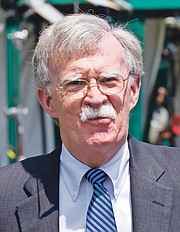 Notable amongst these is the National Security Adviser himself, John Bolton, pictured, who, despite the overwhelming evidence, still refuses to accept the US-led invasion of Iraq in 2003 was a strategic disaster that destabilised the Middle East and led, indirectly, to the rise of ISIS. Critics even suggest this was the worst miscalculation of US statecraft in history. Bolton was an adviser in the Bush White House at the time and apparently pressed for the invasion. He has been described as an unremitting Bush-era war hawk who has now advocated regime change in Iran.

To some commentators, there are now parallels with the run-up to the invasion of Iraq and they question how someone with such a track record should now be in a position to advise the president on such an important issue of foreign policy. The rest of the world can only hope Mr Trump will apply restraint and common sense. Iran is a larger and more formidable military adversary than Iraq. From what I have heard and read, many believe military intervention there would lead to disaster. As an observer, I happen to think they are right.