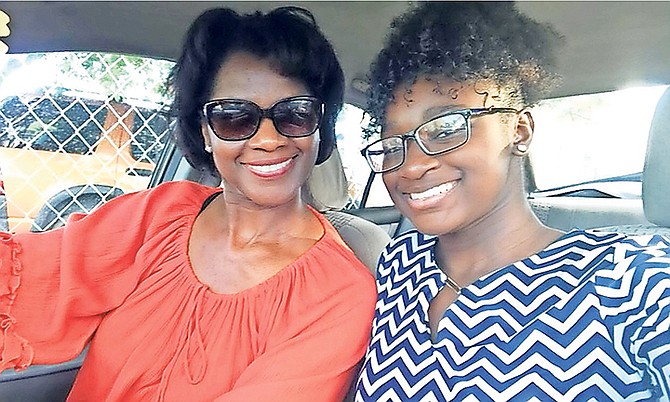 Dominique (right) with her mother, Tami Gibson, who was killed in last year’s Labour Day tragedy.

It’s been nearly a year since Dominique Gibson received the devastating news that her mother had been killed in a crash during Nassau’s annual Labour Day parade. The tragic accident, she said, robbed her of best friend and biggest cheerleader. While her mom might be gone, the 17-year-old said she is doing everything in her power to still make her proud.

Dominique’s mother, Tami Gibson, 48, was one of four women killed when a Ford F-150 truck ploughed through participants of the Labour Day march on June 1, 2018. Today, the Gibson family – Dominique, her siblings Dannielle and Dustin, and her father Dwight – are still coming to terms with the tragedy as they slowly attempt to heal.

“My mother was my best friend, provider, superhero, biggest cheerleader and greatest critic all rolled into one. I don’t think that I will ever be able to explain all that she meant to me, but she was and still is my everything,” Dominique told Tribune Woman. “As it pertains to coping (with her death), my wounds are slowly healing with the help of the great and supportive family and friends that God has put into my life.”

It has been this support system that has helped Dominique to carry on despite the heartache and maintain her excellent grades in school.

The teen attends grade 12 at St Augustine’s College and recently received a presidential scholarship to attend Philander Smith College, a private historically black college in Little Rock, Arkansas. She is also the vice president of the UNESCO Club at her school, a member of Junior Achievers Bahamas and the CFAL Junior Investor programme, plays league soccer, and is part of the yearbook team.

“My mother’s death made me try harder and push myself beyond my threshold because I knew that it would make her proud. Although her death changed my life in ways that I cannot express, it also helped me to realise my fullest potential because of my (wish) to make her beyond proud of what I’m doing,” she said.

“She did everything for me and helped me with everything, so not having her emotional and physical support truly took a toll on me, but having the greatest father, Dwight Gibson, and aunt, Tanya Miller, really made life a little easier after the loss.”

Dominique said while obtaining the scholarship to Philander Smith College is one of the major highlights of her academic career so far, it is, in her estimation, not the greatest.

“I believe that obtaining the small goals that I set for my self each year, such as obtaining a 4.0 GPA, tend to feel like my greatest accomplishments,” she said.

Nevertheless, Dominique said she was filled with joy when she received news of the scholarship. She imagined how proud her mother would have been had she been alive.

“My mother was proud of my siblings and me for every little thing that we did. From finishing a plate of food to making our bed, my mother always expressed the pride that she felt because of us. So I know for a fact that she would be elated and proud of me for winning this scholarship,” she said.

Dominique said she is always motivated to excel because her mother was a firm believer in learning and continuing education. Just before her death, Tami retired from the FirstCaribbean Bank and had planned to start theology studies that September.

For those going through a similar ordeal and unsure of how to deal with a loss of this magnitude, Dominique advises them to keep going, no matter how difficult the situation, because there is always something to live for.

“I would tell someone on the brink of giving up, whether their circumstances are similar or completely different to mine, to keep pushing forward. There is always a rainbow at the end of a rainstorm. And remember that we have to work with God’s timing, so just be patient and persevering,” she said.

Well done young lady, your mother is with you always, she lives on inside your every cell and atom and for sure she is so very, very proud of you!

So very proud of this young lady. She has turned her tragedy into something positive. Well done! May you continue to remain focused.