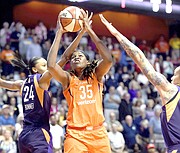 JONQUEL Jones and the Connecticut Sun dropped their second game of the WNBA preseason tournament, but the All-Star forward continues to post promising numbers in limited minutes.

Jones finished with a double double - 10 points and a game high 14 rebounds - in just 20 minutes of the Sun’s 71-67 loss to the Dallas Wings last night at the Mohegan Sun Arena in Uncasville, Connecticut.

“The best thing about this tournament every year is the film that you get. [Monday] night we looked great, but it’s never as good as you think. [Game two] was disappointing in a lot of areas but when we go back and look we’ll figure out that it wasn’t probably as bad also.”

The Sun won the first period 21-14 but struggled to score for the remainder of the contest, posting just 14, 17 and 15 points in the remaining quarters.

Dallas outscored Connecticut 30-14 in the second to take control of the game for good.

The Sun outrebounded the Wings (45-40), but the Wings still had the edge with 13 second-chance points. “That the first exhibition loss in four years, so I’m unsure about the exhibition Hall of Fame. They really bothered us with their defensive scheme tonight,” Miller said.

“We’ll learn from it. We didn’t have a lot of counters in against their (defensive) scheme they were running against us, so we were having to make up things on the fly.”

Connecticut will close out the preseason on Sunday, May 19, travelling to Albany, New York, to take on the Liberty at 2:30pm.

The Sun will open the 2019 WNBA season on Saturday, May 25, against the Washington Mystics.

Last season, Jones played 20.5 minutes per game as a reserve and started only 16 of the 34 regular-season games.

Jones was still named the 2018 WNBA Sixth Woman of the Year, earning the honour as the league’s top reserve for the first time in her three-year career. She averaged 11.8 points, 5.5 rebounds, a career-high 1.7 assists and 1.24 blocked shots per game last season.