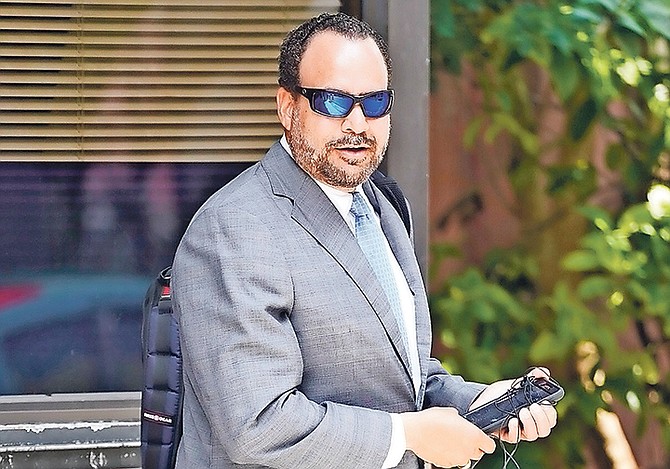 THE Court of Appeal has reserved its decision on whether it will acquiesce to the Crown’s petition to have former PLP Senator Frank Smith retried over allegations he solicited $65,000 in bribes from a woman he was said to have assisted in getting a cleaning contract from the Public Hospitals Authority.

The decision came after Mr Smith’s lead attorney, Keith Knight, QC, sought to convince the appellate court that, contrary to the Crown’s assertion’s, Chief Magistrate Joyann Ferguson-Pratt, pictured, exercised “great care” in coming to her decision to uphold his no-case submission and acquit Mr Smith of the charges.

Mr Knight asserted that while he would not say the Chief Magistrate’s ruling reached “perfection”, it certainly surpassed “the bar where excellence begins”, and that she should thus be “congratulated” for having come to such a decision.

This is, he said, because the Chief Magistrate had to contend with a “political presence” in Cabinet ministers Dr Duane Sands and Marvin Dames, conflicting witnesses, and “tenuous” evidence that all compromised the credibility of the Crown’s case against his client when coming to her decision.

Mr Knight said the Chief Magistrate had to take all of those things into consideration when determining whether the main witness Barbara Hanna was credible, though he noted that the way the case was structured, once her evidence failed it didn’t really matter if anyone else’s evidence passed.

“If the evidence is not credible then it is not sufficient,” Mr Knight said, adding that the Chief Magistrate cannot be faulted for the manner in which she came to her decision.

On Tuesday, Director of Public Prosecutions (DPP) Garvin Gaskin charged that the Chief Magistrate made numerous errors in arriving at her conclusion that a case had not been sufficiently made out against Smith to compel him to answer to the allegations.

He asserted that the Chief Magistrate conducted the no-case submission stage of the proceedings as if it were the end of the trial. Mr Gaskin said she did this by making numerous “findings” about the evidence or the witnesses that proffered it, which he claimed were the result of her analysing the evidence to determine whether the Crown’s case had been proven beyond a reasonable doubt, instead of correctly analysing the evidence with a view to determining whether a sufficient enough case had been made out.

And in doing so, Mr Gaskin said she essentially “short-circuited” the required approach to a no-case submission, as there is no such test in law that would require the Chief Magistrate, during the no-case submission stage, or “half-time”, to accept or reject in full, or accept and reject in part, the evidence led by the Crown.

Those submissions by the DPP emanate from the Crown’s attempts to have its appeal of Smith’s acquittal in February allowed and the matter retried before another magistrate.

Yesterday however, Mr Knight asserted that contrary to Mr Gaskin’s suggestions, there is no inherent “magic” in the word “find”, and further asserted that when used in the legal sense, it is not synonymous with “verdict”.

Against that backdrop, and that of his previous submissions that the Chief Magistrate had a duty to assess the evidence and was also well within her rights to assess the credibility of the Crown’s witness in accordance with the “fused jurisdiction” afforded to her by way of her role as magistrate, Mr Knight suggested that in order to determine the sufficiency of the evidence, an “analytical approach” is required and a decision must be the end result.

And in Mr Knight’s view, the Chief Magistrate did just that. He said she adequately dealt with the preliminary aspects of the case, and correctly examined and applied the various legal authorities presented to her. He further submitted that based on her ruling, there is an obvious understanding of what the relevant law is, and a proper application of those legal guidelines.

Mr Knight further charged that whatever position she took based on the authorities, she operated within her boundaries. And it was only after the “most careful analysis” and “keeping totally within her lane” in exercising her judicial functions, the Chief Magistrate found that she could put little confidence in Mrs Hanna’s evidence and the evidence in general, Mr Knight submitted.

Concerning the issues of credibility, Mr Knight said the Chief Magistrate would have had to consider the discrepancies, inconsistencies and demeanour among the various witnesses. And given that she “clearly” found all of those issues to be present throughout the evidence, so much so that portions of it was “so out of whack with reality” that it rendered some of it “almost irreconcilable”, Mr Knight said she was obliged to uphold his no-case submission.

Thus, Mr Knight asserted that where a judge and/or adjudicator has a feel for the case in its entirety, and would’ve had the opportunity to observe the demeanour of the witnesses, the court of review cannot substitute its decision for that of the trial judge.

He further submitted that in such circumstances, the appeal court would defer to the lower court, save for instances where something went “patently wrong” in the process, that is, if there was either misunderstanding or misapplication of the relevant law. And in the present case, Mr Knight said no such thing happened.

In February, Chief Magistrate Ferguson-Pratt acquitted and discharged Mr Smith of all 15 criminal charges after finding fault with numerous “inconsistencies” and “discrepancies” in the Crown’s case, which she further said was “undermined” by its own witnesses.

In particular, the Chief Magistrate said there were “inherent inconsistencies” throughout the evidence of the virtual complainant in the matter, Mrs Hanna, and that her claims were “manifestly unreliable” and ran contrary to “reason and all common sense”.

Chief Magistrate Ferguson-Pratt also criticised both Dr Sands and Mr Dames for the “egregious” way in which they interacted with Mrs Hanna prior to a police investigation into her claims, charging that their conduct gave the appearance of a “political flavour to a curious bystander.”

The Chief Magistrate especially criticised how a “serving member of Parliament” and Cabinet minister, Dr Sands, “entertained” Mrs Hanna in the circumstances despite her contributing some $300 towards his political campaign in the lead up to the 2017 general election.

She further commented on how Dr Sands approved a $1.9m contract for Mrs Hanna’s business without the approval of the Public Hospitals Authority’s (PHA) board of directors, at a time he said he was fully aware that Mrs Hanna was a contributor to his most recent campaign.

And, she said she could not “overlook” the fact that Dr Sands admitted that Mrs Hanna told him about Mr Smith’s alleged acts of extortion sometime in November 2016, which he never reported to the police.

However, Mr Gaskin has asserted that it was “wholly inappropriate” for the Chief Magistrate to have not only criticised the two Cabinet ministers for their involvement in Smith’s now-disposed of criminal matter, but also connect it to her decision to acquit him of all charges.

Though he did not say outright that the Chief Magistrate demonstrated bias by making those remarks, in response to a question by appellate Justice Roy Jones, Mr Gaskin said the average observer could very well draw those types of inferences from her statements in the circumstances.

“Some things are better left unsaid,” the DPP stated.