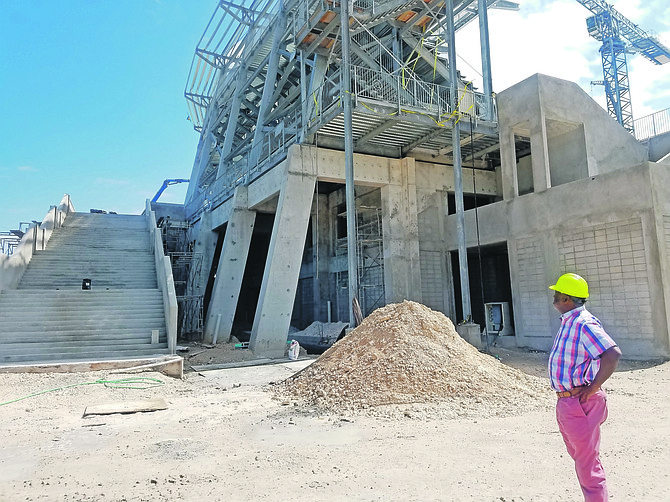 The construction of the new national baseball stadium is well on the way and, when completed, project manager Michael Foster said it will be a multi-purpose venue with all of the amenities.

Originally, the stadium was to be completed by November 2017 after construction began in August 2016 on an 18-month contract by the Progressive Liberal Party. But there was a contractual delay when the Free National Movement government came into power.

Now that work resumed in August 2018, it’s progressing and the stadium is now projected to be finished by November 2019 with an estimated budget of $22 million.

“Barring any changes, we should be on target for the new date,” said Foster while taking The Tribune through a tour of the facility located in the Queen Elizabeth Sports Centre adjacent to Government High School.

“This facility has an extension of three other fields because the projects designed for these facilities are for both local and international events. So we have to construct two more fields that will be in the second phase of construction.”

Under the first phase, the facility will comprise of a major league size diamond and a 5,000 seating capacity with the capability to expand to about 8,000. There will be two dugouts that will also feature a bullpen and warm up area for the players.

Underneath the grandstand, Foster revealed that there will be sufficient space to accommodate a full complement of staff from both the Minister of Youth, Sports and Culture and the Minister of Education, Science and Technology.

Foster said there have already been a number of requests from the Major League, universities and colleges as well as private leagues seeking permission to either host games or use the facilities as a practice site.

“So the additional fields are important to this complex in phase two,” said Foster, pointing out they will be available for pony league, high school, and the international play, utilising the space in between the new stadium to the softball fields at the Baillou Hills Sporting Complex.

“It is also intended to restore the softball field at the Banker’s Field so that we can accommodate both a softball and baseball tournament being played at the same time.”

Based on the recent accomplishments of so many young baseball players signing professional contracts to play in the minor league, Foster said this facility will bode well for the future growth and development of the sport.

Although there have been talks about the budget being ballooned to about $40 million, Foster said this is because the Ministry of Works is adding in the realignment of the road and the sewerage plant.

“We have gotten delay charges from Woslee Construction and we expected that because of the disruption in the work,” Foster stated. “That is something that we couldn’t avoid.

“But as far as the actual cost for the construction of the stadium, it’s still on the projecture budget of $22 million. It is on par with any minor league stadium in the USA.”

Foster revealed that the project features a strong Bahamian connection. “There are no foreigners on the design team,” Foster pointed out. “The only foreigners we have are the people who fabricated the steels that were designed by our engineers.

“This is a project that is being done primarily by Bahamians and when completed, it will be a state-of-the-art event that will be the envy of the Caribbean. It’s taking shape and will be a beauty to behold.”

Now this is one of those items which i personally feel is a waste of money. Will probably never be filled and will just be allowed to be run down. Hope i am wrong.

It is multipurpose? So what are the purposes other than baseball that it will be used for?

And guess who provided the financing for this monumental waste of a costly project at a time when our public schools are crumbling and our public healthcare facilities are in a terrible state???!!!

I guess we can safely assume Minnis and his cabinet ministers are happy to prioritize keeping future voters both dumbed-down and unhealthy.

yup yup yup, I would love to invite you to come out the rock fill fields where the young men are trying to play a game, make this statement and see who all will agree with;

All part of Perry's & Danny Johnson scheme of sports tourism ........... It can pay off if the feeder baseball programs at primary & high school are well planned and executed by BBF

Winter baseball leagues in Central America and DR etc are big business ....... Nassau can get on board as we are a natural spin-off destination from Florida leagues ....... We have enough semi-pro leaguers who can lobby for Nassau to be included in these winter & spring leagues.

This is hilarious, the Bahamas has a failed power system, same for drinkable water, a corrupt police force and this is a priority

Yeah, let's build nothing for the young men in this Island. We took down their park from 2006 and did not check on the young men. So they are using that energy to kill and hurt one another and society is feeling the effects. Put your political spin on this, while the young men scrape for a place to play baseball, or travel out of the country to find a real facility to play the game they love, Whiles not to get involved in a life of crime.