'Police Did What They Had To Do' 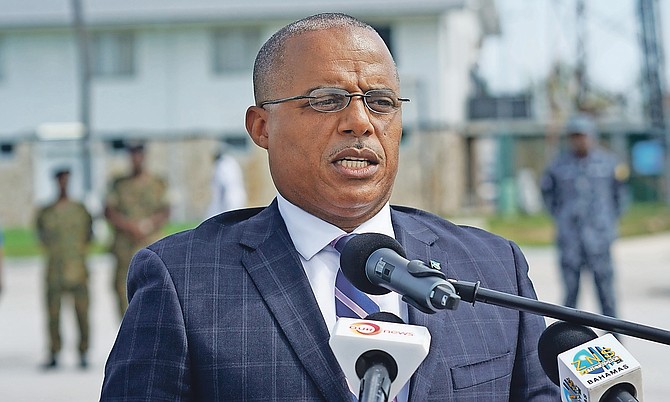 ROYAL Bahamas Police Force officers “did what they had to do” when they killed three men at a Blair home on Friday, National Security Minister Marvin Dames has said, while insisting that, regardless of what allegations are made, the facts will eventually be made known.

Jamaal Penn, Valentino Pratt and Trevor Cooper were all shot at the home off the Eastern Road during an early morning operation. There were reportedly six children in the home at the time. This has raised concern from relatives of the men who were inside the house at the time and from the wider public about how police conduct operations when children are present.

Asked about this by The Tribune yesterday, Mr Dames said: “Let’s wait and hear the matter out before a court of law and then we can have our comments after that.

“It was an operation carried out by the police. Unfortunately, some persons lost their lives. I believe the police may have recovered some five weapons on that scene in addition to a quantity of drugs. And, according to the police, they were fired on.

“In a situation like that, by law, they did what they had to do.”

Mr Dames acknowledged that the situation was out of the ordinary.

“I don’t want to get too much into that particular matter, but these are the times that we’re living in today. We are going to have from time to time unfortunately situations like this, but we’ll see what happens.

“The matter is being prepared for the Coroner’s Court and we’ll allow the evidence to come out and a determination made as to what happened and why it happened and get the outcome.”

The minister’s comments yesterday were similar to those of Acting Police Commissioner Paul Rolle on Monday, who urged people to give officers the opportunity to have their say in court before conclusions are drawn.

The deceased men’s relatives, who were also inside the house during the police-involved killing, alleged that none of the men fired at officers, contradicting police reports that there was an exchange of gunfire. It was also alleged that the same officers who shot the three men were investigating the incident.

The acting commissioner denied the latter claim and urged those relatives with information to speak with police.

“They are not,” the acting commissioner said when he was asked about relatives’ claims that the police shooters were among the officers investigating. “The officers that were involved in the shooting incident are not a part of the investigation.

Asked if the killing of three people by police in one incident was an extraordinary event, Acting Commissioner Rolle said: “I’m not certain that this is the first time that it has happened, but I do not wish to comment because I was not there and in fairness to the officers concerned, people should give them the opportunity to have their say in court.”

On Friday, authorities said the three men were killed in an exchange of gunfire.

Police said they had a search warrant to enter the premises. At the time, several people were arrested.

There are many hardworking, dedicated police officers on the force who don’t agree with what is going on. With all the police killings over the last two years and with the unceremonious dismissal of senior law enforcement officers. Bahamians want the police to fight crime and make the country safe. But they don’t want the police shedding more blood and taking more lives than criminals. And if the 10 y/o account is true about his father being executed in front of him while his hands was up in surrender, this is a very dangerous and lawless act by the police. Every Bahamian should now be concerned and afraid. Many are now questioning the sanity of Marvin Dames and his desire for the police to carry out their duties in such a brutal and deadly fashion, with no regards for children or other citizens who are not involved in crime.

And of course that response is expected from you.

I've got zero tolerance for any sort of criminal element...good riddance.

There are many hardworking, dedicated police officers on the force who agree with what is going on. With all the police killings over the last two years and with the unceremonious dismissal of senior law enforcement officers. Bahamians want the police to fight crime and make the country safe. And they want the police to shed more blood and take more lives of criminals.

Bahamians do not want the Tonton Macoute. That's exactly the path they're on. And you won't see it until it's too late

The Hatfield–McCoy feud, also known to journalists as the Hatfield–McCoy war, involved two rural families of the West Virginia–Kentucky area along the Tug Fork of the Big Sandy River in the years 1863–1891. The Hatfields of West Virginia were led by William Anderson "Devil Anse" Hatfield while the McCoys of Kentucky were under the leadership of Randolph "Ole Ran'l" McCoy. Those involved in the feud were descended from Ephraim Hatfield (born c. 1765) and William McCoy (born c. 1750). The feud has entered the American folklore lexicon as a metonym for any bitterly feuding rival parties. More than a century later, the feud has become synonymous with the perils of family honor, justice, and revenge, recently brought to light again by the documentary, "Hatfields vs. McCoys." If you ever visit this part of Kentucky or West Virginia. This feud resulted in the loss of many lives. And it became so bitter, the Hatfields and McCoys had separate graveyards. They even didn’t want to be buried next to each other. And then two young-uns one from each family would fall in love. Sometimes they would flee the area to get married. And when the feud broke out, they would get the news of each family killing up one another. Must have been difficult to lay down and close your eyes and fall sleep night after night next to someone who’s family had that much hatred for you.

If Dames KNOWS that his men "did what they had to do" why does he not simply share this KNOWLEDGE with The Public? "Eventually" is usually a L O N G time.

Go back and check Dame’s record when he was a police officer.

If we were able, whatever would we find? Is it a can of worms?

Regardless motivation 742 days back behind 91,409 comrades voting for 35 red shirts candidates to represent them up on on floor House - they have no obligation to live in fear whilst Imperial red shirts cabinet reduce their's and visitors freedom of movement in and about Nassau Town - to let them turn the Colony of Out Islands capital into the murderous slum Out Island capital, yes, no, the 91,409 must actively demand urgent sweeping governing changes or their mandate will be recalled before 2022...... yes, no the world is fast becoming aware that, "It is not so safe in Colony of Out Islands."

On one hand he says the police do what they had to do. on the other hand he says wait for the investigation. the amount of weapons keep on increasing first there were three and now there are five. even the news papers reports differ.

I trust that it is still true that one is innocent until proven guilty . and no one should set themselves up as judge, Jury and executioner

I’ve asked before, and nobody was willing to answer, so I’ll ask again:

Why not position armed police outside every door and then announce, with a bullhorn, “You are surrounded. Come out with your hands up!” ... ??

That way, children are not caught in a crossfire and nobody dies unless they wanna die. The bad guys get locked up and nobody who’s innocent winds up in the morgue. It’s what an intelligent police force would do.

Again, you are assuming intelligence AND lack of corruption.

I'm not sure that giving murderers more time to arm themselves, destroy evidence (drugs) and get their human child shields into place, is the best tactic.

If the arms were already in the house, it makes no difference. They can’t destroy the evidence if you shut off the water first — they gonna smoke 40 pounds of dope?

And who uses their own children as a human shield? Even if they did, it would not work: there is nowhere to go. It’s an island. Or haven’t you heard?

Police still haven’t said why the other two men were killed and if or not they were wanted by the police and for what? If I go to the police station must I assume that everyone in the station is a police officer? Orr

Talk all the sanctimonious shit yinna want...I support the Police in this matter!

Until they enter your relatives home by mistake.

The opposition isn't in defence of these criminals, even though they have a right to be tried in a court of law. Its for the innocent person who might get caught up in another wild west fiasco.

For example, where is Marvin Pratt? The man taken into police custody and no one has seen him since. He wasn't a notorious killer as far as I know

Remember the case a few years ago (in Florida)). when the senior mother call the police to help her get her psychotic sun in the house. Within minutes of arriving they shot the son dead.

Was this home 🏡 invasion in anyway related to the civil case that is going on in relationship to ownership of said property.

BTD said it right. Police seem to finally be taking a stand and not putting up with criminals and their BS! If in fact the police were fired on, or so much as had a gun pointed at them, I’d do it all over again! Clean up the country!!!

Dames is a buffoon. You can dress up a monkey, but that don’t make him smart.

If Marvin Dames was not an overzealous, half educated trigger happy idiot, he would try bro ensure the last thing that happens is the police is constantly plastered over the news, especially with multiple killings in a residence in the middle of the night. The police claim that they were shot on is like finding snow on top of Paradise Island Bridge at 12:00 noon today. WHAT Marvin Dames needs to do is get a team of his top officers and officials and come to the table of common sense. Is there a common link between the killings at government house, at Arawak Cay, at Potters Cay in Bimini, the shootings in Fox Hill and on the ramp at Montagu? What do they all have in common.? For sure they are affecting the country’s image drastically internationally and gives reasons for some to tell their people not to come to this country. And if they do come to the Bahamas, do not interact with Bahamians. Who would want to form this type of image of The Bahamas? And who is benefiting from it? Are the police’s action the right and proper ones by responding with even more gunfire and killings? Is crime and murder in the Bahamas really Economic Warfare. Are Bahamians being USED to destroy their own economy and disenfranchise their own selves? How many unregistered foreign agents (diplomats) are operating in The Bahamas and what are their intentions. How many are posting pure negativity on this very same Tribune page?

Hint look up in the sky sometimes Marvin Dames and Anthony Ferguson .