Cococay Could Be Model For Grand Lucaya 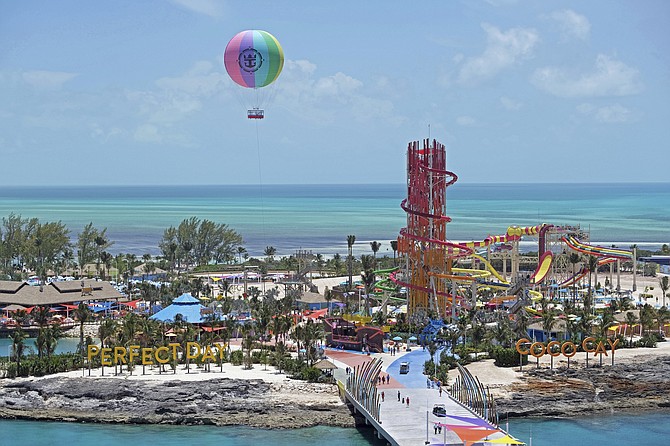 AN enhanced Grand Lucayan with Royal Caribbean International at the helm would spur a “huge economic impact” on Grand Bahama and should reinvigorate the country’s entire tourism sector, according to the cruise line’s president and CEO Michael Bayley.

His comments came on the sidelines of the ceremonial opening of RCI’s new top-rated island destination in the Berry Islands, Perfect Day at CocoCay, telling members of the press his company was positioning itself to spearhead a multi-million dollar, multi-phased project on par with CocoCay in Freeport if negotiations with the government are successful.

Mr Bayley added: “I am not an economist, I am a businessman, but you can’t help think that the economic impact isn’t going to be fantastic.”

RCI signed a letter of intent to purchase the Grand Lucayan resort property from the government for $65m back in March.

Included in that deal is proposed initial investment of $135m for the first phase of RCI’s proposed redevelopment of the site.

RCI has said its project will take place over a 24-month period and estimates that some 2,000 jobs would be created in the first phase.

At the signing, held at the Office of the Prime Minister in Grand Bahama, State Minister for Grand Bahama Kwasi Thompson said the joint venture between RCI and its investment partner, the ITM Group, will not only combine the redevelopment of the Freeport Harbour as a cruise port of choice but will also transform the Grand Lucayan resort into a theme park, featuring water-based family entertainment, with dining, gaming and entertainment options and five-star hotel accommodations.

Addressing those plans on Friday, Mr Bayley said his team has gone to great lengths to illustrate to the government of the Bahamas RCI’s “qualities and capabilities” relative to creating a “super destination.”

Mr Bayley said RCI was hoping to bring the same creativity, intelligence and guest-centric experience displayed at CocoCay, to a new Grand Lucayan; insisting that executives are aiming to make the property “second to none.”

“And I think that is really what Royal Caribbean is pretty good at…delivering great vacations and making sure the guest have a great day,” he told reporters. “And I think we are going to apply all of that design and all of our understanding and knowledge to creating an experience in Freeport that makes people say, I want to go [there].”

However, Mr Bayley did note RCI’s full project specs could not be revealed publicly until a finished deal is worked out between the two sides. He asserted while there is clear excitement on the part of both parties, given the success of CocoCay, he said there are still negotiations to be concluded.

Mr Bayley said the two sides had another 30 to 40 days of discussions remaining.

When asked if the potential Grand Bahama project would receive the same level of attention and focus as CocoCay did, Mr Bayley said yes.

“[Freeport] will be just as important [as CocoCay],” he said.

“I think that we’ve said that the Bahamas is our number one destination. I think if you look at the growth of the cruise industry and tourism overall, [the Bahamas] has got the best location in the world. It is great. So we see Nassau, opportunities in Nassau. We hope that the Global Ports Development will go well and that we will participate in creating a more desirable destination. And it is the same for Freeport. You know, these are great… all of these destinations have wonderful potential. Our job, which you see here, is to bring that potential to life,” he said.

Mr Bayley added: “And I think that we see that in our guests reaction to a Perfect Day at CocoCay is, you did it, you got it right, we are real super happy. That is what we are being told by all of guest, this is the highest rated destination, and that is what we want Freeport to be.”

Both Prime Minister Dr Hubert Minnis and Tourism Minister Dionisio D’Aguilar were on hand Friday at CocoCay’s ceremonial opening, with both men taking time to talk up the potential of RCI in Grand Bahama.

For his part, Dr Minnis referred to RCI’s work in Grand Bahama as a “major project,” and he suggested the two sides had committed to seeing the project “come to fruition.”

As for Mr D’Aguilar, he insisted that talks were “progressing” at a steady pace, promising a full and accurate address after those talks are completed.

The Grand Lucayan’s tender process attracted some 62 expressions of interest from local and global firms.

That list was shortlisted to 11 on February 14, and subsequently, on March 22, RCL was unanimously approved for recommendation to Cabinet.

For his part, Dr Minnis referred to RCI’s work in Grand Bahama as a “major project,” and he suggested the two sides had committed to seeing the project “come to fruition.”

As for Mr D’Aguilar, he insisted that talks were “progressing” at a steady pace, promising a full and accurate address after those talks are completed.

The tender process was a croc as it had already been decided Royal Caribbean would be the big winner. Here we once again see dimwitted Minnis and his white-haired poodle, D'Aguilar, working overtime and bending over backwards to accommodate every want and wish of foreign investors through exceptionally generous concessions while honest and harding working Bahamians and their businesses are taxed to death and left to unmericifully struggle to survive day-in-and-day-out. And to think the dimwitted doc promised over and over again that it would be the Bahamian people's time if he were ever fortunate enough to become PM. The voters get swing (betrayed) by Minnis in a most horrible way!

As far as doc is concern it will be like taking milk from a baby. And doc is the Baby,

Like see minister finance KP will highlight if this sole cruise liner is currently injecting $300 million yearly economic impact into Colony of Out Islands economy - and what is the breakdown, who gets what and what of $300 million goes directly government and what for?