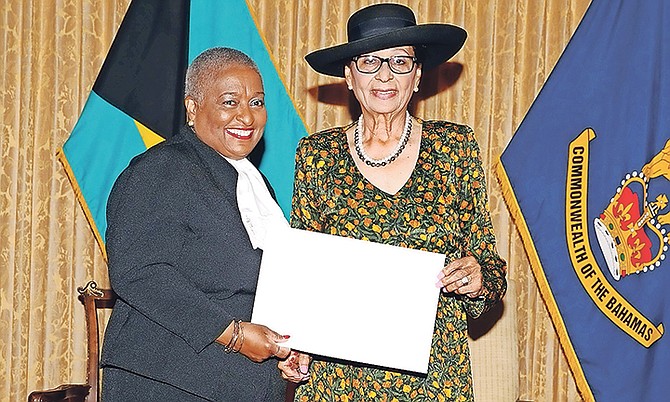 Ruth Bowe-Darville is sworn in as Justice of the Supreme Court by Dame Marguerite Pindling. Photo: Letisha Henderson/BIS

In an interview this week, Mr Davis appeared opposed to that idea.

“To appoint a judge to a substantive post with only what I’d call the residual two years left - which requires an extension at the behest of the prime minister after consultation with me - I think on the matter of principle, is rather unfortunate,” he said.

“It doesn’t speak well to the process. I know Mrs Ruth Bowe-Darville very well, this has nothing to do with her, but this is a rather strange phenomenon and goes against principle.”

The situation has sparked murmurs in legal circles and prompted critics to question the independence of the Judicial and Legal Services Commission, which has the constitutional authority to make Supreme Court appointments.

Mrs Bowe-Darville has been an advisor to the Free National Movement and once served as senior executive assistant to former Prime Minister Hubert Ingraham.

Former Minister of State for Legal Affairs Damian Gomez, QC, said yesterday: “I have been consistently a legal representative for the PLP. I have never been to a recount that Ruth was not present for the FNM. But I don’t mind her politics. The problem is that at 64, four days before her 65th birthday, how is it that a reasonable body of persons could appoint her to a position on the bench knowing the date of her retirement? I love Ruth, I’ve voted for her as president of the Bar before, but I am just flabbergasted.”

During her accomplished career, Mrs Bowe-Darville has acted as a stipendiary and circuit court magistrate, served as chairperson of the Women’s Advisory Council, Prices Control Commission and the Nursing Tribunal and as an associate tutor at the Eugene Dupuch Law School. She was recently the managing partner of Commonwealth Law Advocates. On Wednesday, a government source said her appointment had been delayed and should have taken place months ago.

When contacted, Attorney General Carl Bethel added that she previously acted as a Supreme Court judge “and has vast legal experience”.

“She is a fit and proper person for consideration and for appointment as a Supreme Court justice,” he said.

However, Mr Gomez expressed concerns about the government’s approach toward the Supreme Court, Court of Appeal and the system of justice.

“The appointment of people who are on the eve of retirement does not signal that the government is treating these institutions with any degree of seriousness,” he said. “The whole stew of issues relating to access to justice and systemic change in civil litigation procedure are left unattended basically because these elderly people are more comfortable dealing with what they know than plowing the fields and we really have a major problem in the Supreme Court that can only be fixed if persons with time to do it are enabled to do the job that’s required.

“If you chart the time that it takes to get a matter from a writ to getting a judgement, we are notorious for failing to deliver to litigants in a reasonable time. We are really struggling and it’s not like we don’t have judicial talent in the under 65 area, we do so you don’t have to appoint people who are 64 and 65. And the level of regularity with which it is being done now, I expect the public to sit back and wonder what’s going on. For instance, Justice Keith Thompson was appointed pretty much just before his retirement from the Industrial Tribunal. I could understand rewarding a labour judge who has served the country with some distinction. But that should be exceptional. You can’t do it for everyone. Ruth for instance served as Bar president for a long time. Having just done it for Keith, why would you do it again so soon?”

In February, The Tribune revealed that Brian Moree, QC, is expected to be appointed as the country’s next chief justice. It is understood the soon-to-be 64-year-old will be officially appointed in the coming days.

“He is coming to the end of his career,” Mr Gomez said. “You end up in a situation where you’re not going to get the best out of people because they’ve already given their best. Under the previous administration, my uncle, Roger Gomez, was like Justice Keith, he was chief magistrate, he was 64 and he was appointed to the bench. But his tenure was not extended. It was literally an appointment to honour him for the service he contributed to the judiciary as chief magistrate.

“He and Ruby Nottage I think were the two most elderly people appointed under that administration. Nottage was in her 60s but most our our judges were in their 50s or 40s, Renae McKay, Deborah Fraser, Justice Evans, Bernard Turner, Carolita Bethel, these were people who had time. I think we need a real policy with respect to the judiciary and these appointments fly in the face of the fact that we do have talented lawyers who can be appointed and who are young enough to give the country years of service that would be effective in giving Bahamians access to justice. No one is saying the people they are choosing are academically unfit, all we’re saying is it’s inappropriate to appoint someone at 65 to the bench. The last thing we need to be doing is making a mockery of the only non-political institution that’s left.”

Mr Gomez also questioned why Acting Supreme Court Justice Andrew Forbes, who served in the acting role for about two years, has not been confirmed in the substantive post.

“Justice Forbes,” he said, “has been acting for almost two years. Why not confirm his appointment? If you don’t confirm him, he reverts to his substantive post as deputy chief magistrate. We should get some explanation as to why they feel it’s necessary to confirm an outside 64-year-old on the eve of her 65th birthday when you have an able-bodied person in the position acting. Are the people on the commission really attending to their responsibilities? This really calls into question the independence of the JLSC.”

“Justice Forbes,” he said, “has been acting for almost two years. Why not confirm his appointment? If you don’t confirm him, he reverts to his substantive post as deputy chief magistrate. We should get some explanation as to why they feel it’s necessary to confirm an outside 64-year-old on the eve of her 65th birthday when you have an able-bodied person in the position acting. Are the people on the commission really attending to their responsibilities? This really calls into question the independence of the JLSC.”

Police, Defence Force and Prison Officers sent into retirement, some not yet 60. Judge gets sworn in at the age of 64years, 361 days old Maybe she deserves the post if only to get a decent pension. But did the policemen dem deserved to get kicked inside their boots the way they were? After serving this country for so long? Are you serious?

I guess doc is putting FNM's in place. Are they independent??

Wow, I can't believe that I actually agree with Brave on this one!

If the government is saying that they are retiring police officers who have reached the maximum amount of years allowed or age, then most certainly it should apply in the judicial sector and all across the rest of the civil service. There has to be consistency!

I am a firm believer that if you have served your time, step aside and allow someone else to do the job.

Concur - there has to be consistency.

This abuse judiciary by this comrade prime minister is no different than practiced by the previous three prime ministers and the one premier. The Queen has granted her Colony of Out Islands prime minister the ability to use and abuse Crown powers. The Queen has also granted PM, unfettered powers to use, abuse MP's and to make all appearing politically payback partisan appointments, yes, no....... Prospectively, a Commonwealth PM has more granted power than does an American president, yes, no?

They need to take age limits off these posts ......... like in the USA ...... let them serve until they are medically declared incompetent, voluntarily resign, or die.

We waste too many human talents and resources with these stupid artificial age definitions .......... None on PM or MP.

Ma comrades, rather than just another swtcharoo back forth between Imperialism red shirts and PLP parties come general election 2022 - why not undergo drastic revolutionary, visionary reform Colony of Out Islands by proudly reclaiming our original name Bəˈhɑːməz - by ridding populace of ministerial system of government, yes, no..... time even launch competition for new National Flag and Anthem, yes, no

Mrs.Bowe Darville is qualified for the post. However her appointment to the bench so close to the retirement age will raise questions.This is just a shameless manipulation of the system.This is how things go in this country.All of the political parties who have held power in this country have done this.This is why the country is in the state it finds itself today.

Perhaps, or perhaps persons can just be professional and separate politics from their work, even if you cannot. Its funny, you can go and google an article from 2013, bahamaspress, the plp trolls spitting their usually drivel, talking about how the chief magistrate was a political appointment and all kinda carrying - on - slandering people name and work, now in 2019 when she acquits Frank Smith, she is just doing her job and being impartial.

My comments had nothing to do with politics as you implied.It had to do with the timing of her appointment,it is weird. Both parties are guilty of this.The problem with people like you is your loyalty to the party is greater than it is to the country.

When I reply to a direct comment i hit reply, just fyi, for the future. See how when u hit reply it indents under the comment you are replying to. I offered a general statement not directed at you. But I certainly wasnt about to type it a more than once. So I left it as a general statement.

My comment wouldn't make since in regard to what u said.

But, I'll reply directly since u seem to have an issue:

"OK, I didn't reply to you, or anyone who commented on her age or the timing. Perhaps the comments above you that use words like crony, independent, etc."

OK, I didn't reply to you, or anyone who commented on her age or the timing.

Perhaps the comments above you that use words like crony, independent, etc.

What seems to be escaping the considerations of all the above commentators is, MRS. BOWE-DARVILLE ACTUALLY HAVE NOT JUDGED HER OWN DECISION TO ACCEPT THE APPOINTMENT, IN THIS MANNER, AS WRONG.

Just as interesting, her duties entails judging others as to whether or not they are right or wrong in their decisions or actions.

We, The Bahamas, are in a broken state of affairs; especially, our judiciary.

She accepted the promotion .......... she feels that it was justifiably awarded.