Evacuees Ask - Where Is Your Compassion? 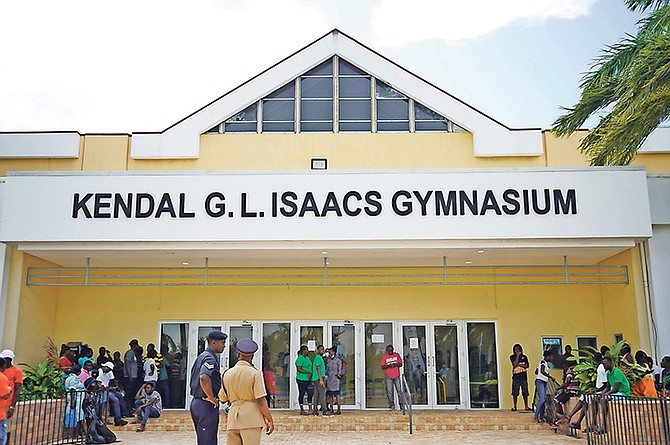 JUST a day after Prime Minister Dr Hubert Minnis announced that all “illegal” migrants will be banned from Abaco’s Family Relief Centre, some storm victims living in shelters are calling for the government to show more compassion to those without immigration status, citing the move as a “heartless” one.

“If the storm ain’t break you, these people sure will. What is a piece of paper? People been through sh‘t and they shouldn’t be worrying about these types of things. How much illegals here?” asked one shelter victim, who wanted to remain anonymous.  “Ain’t much of them here and you worrying about status. These people almost died. Some of them are injured and they worrying about status. It’s heartless, man. So, if they can’t (live in the domes), where they gone send them to in the condition Haiti in right now?”

According to the November 1 Ministry of Health situation report, people in communities affected by Hurricane Dorian have not been presenting themselves to clinics because they fear deportation. BuzzFeed News similarly reported on Sunday that in a span of a few days 600 evacuees left shelters out of fear, this according to a United Nations internal report.

Several shanty towns across Abaco were also decimated after Hurricane Dorian - the most powerful storm to hit the northwestern Bahamas - pummelled Abaco and Grand Bahama, destroying many homes and businesses and displacing hundreds.

In response to the devastation left in Dorian’s wake, the government plans to set up a temporary family relief centre in Abaco, which will feature dome housing structures and is expected to accommodate some 1,000 hurricane victims.

But, as stressed by Dr Minnis, those who are living in the country illegally will not be allowed to reside on the centre’s premises.

“There will be no illegals in the domes, full stop, no illegals,” he said during a press conference on Sunday.

Responding to the prime minister’s announcement, one shelter victim – who wanted only to be identified as Mary Louis – told The Tribune that she is very fearful of her future.

After living in “Da Mudd” for some 20 years, Mrs Louis said she still has no papers.

“I served food in Da Mudd. I can’t go back Haiti because I have three children. I want try get work permit, but it’s too expensive. I three kids to take care of. Where will I find money to pay for work permit at a time like this?” she asked.

Mrs Louis found shelter in the church when the category five storm hit.

Like most hurricane victims, she eventually plans to return to Abaco.

But, when asked where she will stay considering her “illegal” status, Mrs  Louis replied: “Whenever God wants me to go, I will go. I just can’t go back Haiti. The government say we can’t stay in homes they have, but I think it ain’t right. I’ve been in Abaco for 20 years. We just lost everything. Haiti is no better. I have nowhere else to go.”

“I want to get a work permit because I cant’ go back to Haiti. It bad there. If the government don’t want us there (in the domes) then we could find somewhere to stay,” he said.

They've got their nerve asking all of 'true' Bahamians where is our compassion.

Where was their lawfulness when they took it upon themselves to illegally enter our country to excessively procreate and heavily suck on education, healthcare and many other social and welfare benefits funded by us 'true' Bahamian taxpayers?!

Minnis needs to get off of his butt and start aggressively deporting these illegal aliens on a regular and sustained basis. Guaranteed deportation is the only loud and constant message that we should be sending to all other Haitian nationals back in Haiti who may be thinking about paying human traffickers to smuggle them into the Bahamas. There is no other way of dealing with this problem bearing in mind that Haiti's total population is well over 5 million. Deportation is the only means of deterrence.

The evidence is overwhelmingly irrefutable that our small nation is being literally suffocated and choked to death by an invading force of many many thousands of illegal Haitian aliens. DO SOMETHING ABOUT IT MINNIS, DON'T JUST GIVE US LIP SERVICE!!

Sorry, but you can go anywhere in the world you just can't stay here, I have a 2- month grandson, in 20 years he is going to need the Bahamas for him and his offspring.

There is poverty, there is deprivation, and there is a mindset. 20 Years and getting the money to pay for a Work Permit is an inconvenience? I know now is a bad time because of the storm, but was it ever a good time?

For better for worse Bahamas does not have birthright citizenship, so why born loads of children and saddle them with Statelessness and a sad future?

Thirdly, I know of no country that will give "free houses" to others when their own people need them.

The employer is suppose to pay for the work permit. not the employee. if the statement is true than something is wrong with the Immigration department.

There may not be enough shelters to accommodate all of the people who are seeking shelters.

If it's the Minnis administration's true intent rid the colony of Haitian nationals - who will be left be hired to clean-up, do the repairs, new construction and restoration for the hundreds comrades in Abaco and Grand Bahamaland seeking to renovate and rebuild, yes, no ...

Send them back. Let them apply for the jobs that may come available when they are deported. They pay to come back on a work scheme. When the project is finished, they then go back home on their own monies. Don't think we are tired of having to pay for them to fly back free only to come back and make a mockery of our system by changing names and forging immigration documentation to work as someone else. My dad was a part of the contract in Florida many many years ago. Let them do it right by applying. Have no problem with them doing it right/wrong.

But, ma comrade JuJu, which PM Miniis are colony's Haitians to believe, the one that is talking down them now -or is the PM to be no longer believed when back during the month of May 2018, when he called for love between Bahamalanders and Haitians ..... guess the PM meant say - tough love for arrest, convict, jail and deport Haitians, yes, no ... Unfortunately, the Haitian nationals are not the only ones who are having much difficulty believing anything this PM says ....In fact to make sure that the Haitians, heard exactly the LOVE the PM was sharing. he brought along his Minister of Transport and Local Government Frankie to serve as his creole language interpreter ....You just can't make Frankie up ....

"What is a piece of paper?" Wow. This sums up the ungrateful, entitled attitudes of too many Haitians and their disregard for the law. Illegal or not, they also seem to have no problem challenging the PM as if they're owed something. Organizations like the UN, other international organizations, their loudmouth Charge D'Affiares and the fake outcry from Jamaicans has provided them with false justification. These feelings of entitlement will fester; and we can see what happens when Haitians get riled up.

This government needs to show them it does matter, and seek internationsl assistance to conduct an orderly, and mass deportation of illegals, that this country has never seen. Including Bahamas born with no pending application. If we don't respect our laws which doesn't recognize birthright citizenship, its no wonder a "piece of paper", other than the $58 million pieces paper sent to Haiti, doesn't matter.

Bredren. You sure have a thing for Jamaicans. How Jamaicans get involved in Haitian and Bahamas Mixup?

One thing I can say about my peeps, for all their faults and folly. They dont stay in no shelter for over a week. Plus they won't live in no Dome. So don't worry about that.

Jamaicans inserted themselves on the "mixup". A few weeks ago, a washed up Jamaican artist led thousands of his Jamaican followers in a barrage insults and threats towards Bahamians over the so called mistreatment of Haitians. Groups like this, and organizations like UN who cite same logic for deporting or withdrawing from Haiti for financial reasons, condemn Bahamas for the same...are who make Haitians feel above the law.

Bredren, I don't classify or style up 'all" Bahamians. So I don't want to hear about any washed-up artist.

Like I said. For all our faults we don't generalize a 'whole people'.

You know well no Kreyol speaking Haitian ain't listening to no Jamaican.

You are welcome to visit Jamaica my friend, and stay as long as you want.

You are generalizing Jamiacans, when you s a y you as s people don't generalize, aren't you? Of the many comments I read Jamaicans were generalizing Bahamians, and Haitians abroad and in Bahamas, were very receptive to being cast in the victim role. And Bahamians as villians.

I can see you are no peacemaker. Kill your hatred bro

My comments are factual or common sense, never based in "hatred". But I'm not surprised you'd deflect from that with baseless labels because you're an antagonist (i.e not a peacemaker)

The UN is obviously wrong on this!

Just want to ask the evacuees, where is your gratitude??