‘Face It - This Was A Mistake’ 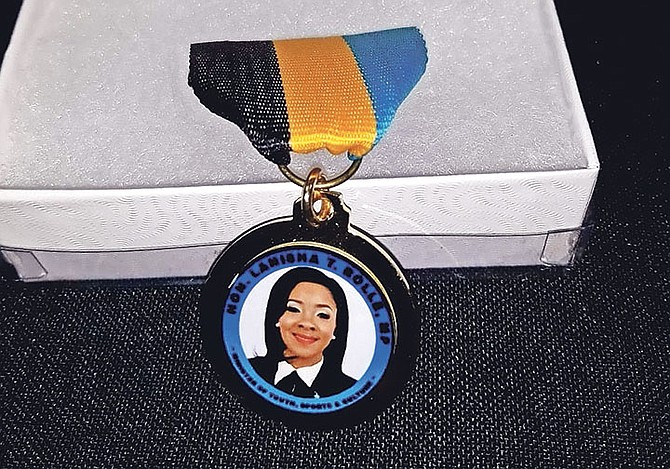 SOCIAL media erupted yesterday when images of pins with the face of Youth, Sports & Culture Minister Lanisha Rolle on them surfaced online.

Mrs Rolle was also under fire elsewhere – with Senator JoBeth Coleby-Davis criticising the minister for failing to appoint a director of youth.

The pins were given to young people who participated in Youth Parliament events last month. The cost of the pins featuring Mrs Rolle and who paid for them is unclear.

A Facebook page associated with Mrs Rolle said the “photo with the minister of youth sports and culture is a commemorative coin provided by the office of the minister during a courtesy call by the 2019 youth parliamentarians. The coin has two sides: one side reflecting the 2019 theme and the other side with the photo of the minister issuing. The commemorative coin did not replace the usual youth award medals and pins that were issued to awardees during youth month”.

That explanation, however, didn’t pacify many critics.

One Facebook user said: “Two sides, four sides, it doesn’t matter, your face should not be on it. If the honorees face isn’t there, how yours get there? I hope the persons receiving them give them right back to you since you so in love with yourself.”

Another user said: “Your face should not have been on the coin, period.”

Said another user: “Welcome to the Commonwealth of The Bahamas! You just can’t make this nonsense up! I need to know if my tax dollars funded this?”

Another user said: “I can’t think of a more egotistical and nonsensical thing than this ever happening before.”

Mrs Coleby-Davis said that Mrs Rolle’s failure to appoint a director of youth was the greatest disservice by a minister to young Bahamians.

In a statement issued yesterday, the Senator said: “Rather than appoint a director, the minister’s hiring of a consultant creates an administrative vacuum that challenges the core functionalities of the ministry. We accept that consultants have their roles but their role is not the role of a director. The absence of a director of youth translates into the void of institutional knowledge, weakened administrative synergy, institutional confidence and organisational and cultural integrity.

“The minister of youth’s negligence in leaving the post of director of youth unfilled for two years is a direct disregard for understanding the commitments the ministry is mandated to fulfill in the duties to young Bahamians.”

“Moreover, it is becoming increasingly difficult to ignore the minister of youth’s capacity as a minister of the government,” the statement continued. “There are more young Bahamians unemployed, challenged by the social and economic pressures that are the direct result of this government’s policies.

“Many talented and deserving young Bahamians are excluded from the national development of The Bahamas. Thus the absence of a director of youth makes addressing the country’s youth empowerment goals difficult.

“The minister has abandoned her duties without understanding that she has abandoned critical, core areas of her mandate. This, she has done – whether by ignorance or lack of action or her remarkable ineptitude – and this has ultimately resulted in a platform that is seen as toxic to itself and deteriorating the productivity and potential of the Ministry.

“I remind the minister to avoid being entrapped in her personality and understand that the minister does not supersede the general function of a government ministry.”

Boooo everybody and their dogs want to be seen as relevant today, what's becoming of our elected officials, there's no more displaying of morality, my mama don't like you and she likes everyone. Mrs. Minister of Sports if you like the way you look that much then you should go and love yourself, the honorees don't need you or a picture of you hanging around their necks or pinned to their chest, get over yourself, your bubble can become deflated, come 2022 [ POW ]

wow, this says a lot about Ms. Rolle. Why would you put your face on the award?

I guess she doesn't see enough of herself in the mirror. This was tacky, narcissistic and in very poor taste.

This woman has keeps falling to new lows. I'm beginning to think that she has some serious self worth issues - a true over compensating narcissist. Scary crap!

She needs to be on a watch list. She seriously could snap.

Instead of the minister concentre on her self so much, she should work harder and do something about the dance programs in this beautiful country. The National Dance School of the Bahamas suppose to open in September and the way it's looking is not going to open at all for the school year 2019-2020 because "the building is not up to the standars" hundred of children sign up for this dance program and they are still waiting. She needs to be replace ASAP her ineptitude as a Youth, Sports & Culture Minister is simply unacceptable.

Whilst trying maintain me best public face Christianity posture, I will say, I most like how the Most High Imperialists Comrade Priestess crown minister's medal's specific feature of absolute resemblance - does bores to that of a post plastic surgery Michael Jackson, yes, no .... Whomever the on the PopulacesPurse's sketch portrait artist was, they sure hell captured a remarkable Michael likeness .....

Ma comrade Sicken, was quick jump right off medal at me, how skillfully the on PopulacesPurse's artist, detailed the MJ's facial's black and white highlights, yes, no ....

Yes , it has been little over ten years since his death in 2009.

The PM said she has to pay back the money. LOL.

I think you guys are making a big deal over nothing! It's a keepsake for goodness sake. It commemorates the event while Lanisha is Minister of Youth. As the Minister giving the award, she put her face on one side of it, why is that an issue? It appears to be a special keepsake given by the Minister.

We have so many pressing issues to address in this country and this is the nonsense we waste time on? Do you think the victims of Hurricane Dorian care about Lanisha's face on a commemorative award? How about our country's fiscal position? What about all of the crime? We are barely hanging on for dear life as a country and people find time to waste on trivial discussions.

I just can't! We really need a change in our mindset, if we are going to push this country forward.

@geostorm: I think the question you asked in the first sentence of your second paragraph would more appropriately read:

"We have so many pressing issues to address in this country and this is the nonsense Lanisha Rolle wastes her time on?"

It's an issue because what has she accomplished as MOS&C or in sports or culture? Nothing. The youth won't remember or care who the minister was in 2019. Why should they idolize someone simply for their status, not accomplishments or progressive views. This kind of thinking is what holds this country back. Her picture should be replaced with Buddy, Shaunae, Stephen or alternately 1 of the 3.

The woman showed the Peoples time voters who she is and they voted for her.

Besides she is the favored one.

Well I’ll be darn!! Just when you think she can’t sink any lower!

I guess this is what happens when you take someone out of a small law office in the back of East Street somewhere and put them in high office and the individual hardly could handle the smaller position in the lowly law office much less the ascension to a higher office. It also doesn’t help when the individual is a known know-It-all with pride issues. So there you have it folks! One blunder after another everywhere they go.

I will say this again. She gots to be Minnis's sweetheart. No other explanation for this dumb woman to still be on our payroll......