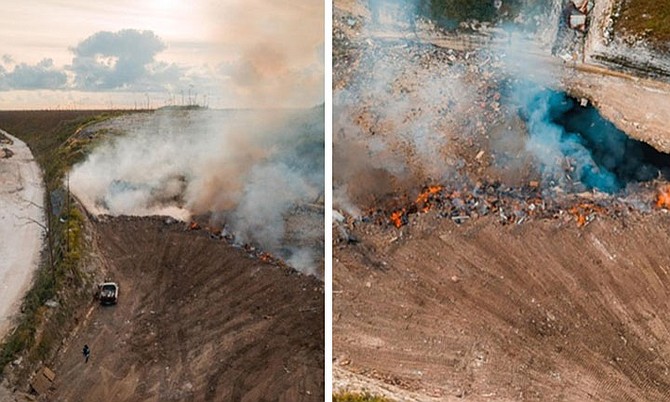 Pictures which appear to show areas on Abaco on fire.

MINISTER of Works Desmond Bannister said yesterday investigations are being carried out into the debris fires in Abaco, after it was reported large mounds of debris were being “intentionally” set on fire in areas devastated by Hurricane Dorian.

The matter was brought to the public’s attention on Tuesday by a local human rights watchdog, Rights Bahamas, who warned that if bodies are being burned amid the debris it would be “unforgivable”.

“(We) have become aware of several photographs of large debris fires which our contacts on the ground claim are intentionally being set,” Rights Bahamas said in statement on Wednesday.

“If these fires are indeed being set at the behest of government officials, we denounce this in the strongest terms, cry shame on all involved and demand they cease and desist immediately.”

Recently, Environment Minister Romauld Ferreira noted to reporters that the clean-up of debris in Abaco has already begun, adding that the process was being spearheaded by the Ministry of Works.

“Once that debris is removed, collected and removed. It’s being sorted on site. In other words, the place where the debris is being cleared from, it’s being sorted there and it’s going to lay-down sites,” he said.

“When it comes down to the lay-down site, that’s when the Ministry of Environment and Housing takes over, sort of with the final solution for it which will be a combination of mulching, some will go into the landfill, some will be exported and some will hopefully be recycled and be reused.”

But, according to Roscoe Thompson, chairman of Marsh Harbour/Spring City Township, the debris is not being properly disposed and separated as officials claimed.

“There is no process. You just go around and dump your stuff and nobody is separating the debris. All of it is going to one area and that’s it. They’re burning the stuff and covering it and filling it in an area. I don’t think the government is doing this, but whoever got the contract for the pushing is doing it,” he said.

However, speaking to The Tribune yesterday, Mr Bannister suggested that if debris was indeed being burned at the sites, it was being done without the approval of the Ministry of Works.

Hurricane relief and redevelopment co-ordinator Algernon Cargill said: “I would find it very credulous to believe that the government would be advocating the burning or sanctioning the burning of debris, particularly without sifting the debris for remains or any other chemicals or toxins.”