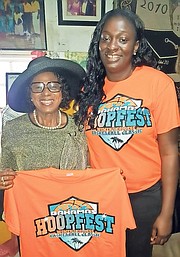 AS she gets prepared to be honoured by the Bahamas Hoopfest, the Bahamas’ first player to participate in the Women’s National Basketball Association (WNBA) Waltiea Rolle took the time out to meet Cynthia ‘Mother’ Pratt, the first female to serve as a Deputy Prime Minister of the Bahamas.

Rolle met on Saturday at the home of Pratt, one of the country’ most versatile female athletes. The Bahamas Hoopfest, scheduled for November 20-30 at the Baha Mar Resort, will bring five women’s NCAA Division One basketball teams here to compete. They are Arkansas, Ball State (Ind.), Fordham (N.Y.), Lehigh (Pa.) and Wisconsin-Madison.

The event tips off with a Thanksgiving Day matchup between Lehigh and Ball State on November 28. The slate continues on day two with an early bout seeing Arkansas face Fordham followed by Ball State taking on Wisconsin.

On Saturday, Fordham returns to take on Lehigh in the final day’s opening action before the event concludes with a showdown between “Power 5” foes Wisconsin and Arkansas.

On Thanksgiving night, November 28, we will have a Junkanoo Thanksgiving celebration for the teams at the Baha Mar Resort. This event will take place from 5-7pm and will be open to the public. Rolle was a third-round pick (36th overall) by the Minnesota Lynx in the 2013 WNBA Draft and appeared in all three pre-season games with the team, averaging 7.0 points, 4.3 rebounds and 1.0 steals per game. In six games with the Storm in 2014, Rolle averaged 3.2 points and 2.8 rebounds per game.

The 6’6” centre and University of North Carolina product last played with Xianjiang Magic Deer of the Chinese Women’s Basketball Association. She made Bahamian basketball history by becoming the first Bahamian to play in the WNBA when she appeared in the Storm’s 80-74 loss to the Tulsa Shock on July 29, 2014.

A 2013 graduate of North Carolina, Rolle owns two of the top 10 best shot-blocking seasons in school history. Her 89 blocks during the 2013 campaign stand are the sixth best of all-time and her 82 blocks in the 2011 season eighth in North Carolina history.

Bahamian Dr Simeon Hinsey is a co-founder of iYES and Bahamas Hoopfest, whose mission is to enhance cultural exchange between youth in the United States, The Bahamas and other Caribbean nations in order to develop communities through education, recreation and sports while preparing youth to pursue post-secondary education.