Ceremony For The People Swept Away By Dorian 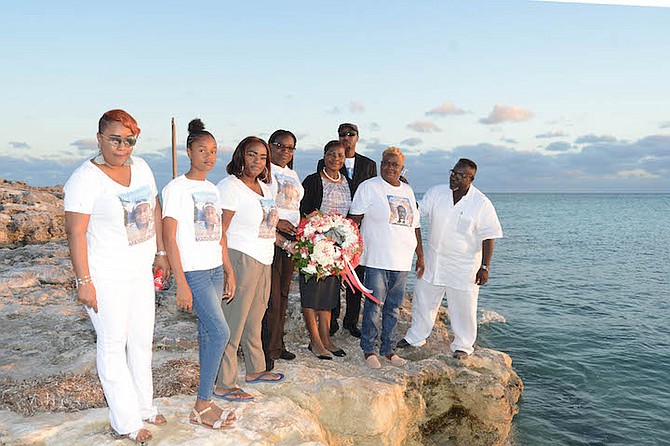 A MEMORIAL wreath was released into the sea at High Rock on Sunday for the missing victims in East Grand Bahama who were swept away by storm surge during Hurricane Dorian.

Most of the unaccounted for victims on Grand Bahama were from the High Rock community, where more than a dozen persons are still missing and feared dead.

Many gathered for a service of reflection in honour at the Government Park in High Rock on Sunday at 2.30pm, where candles were lit in remembrance of the missing.

Pastor Pedyson Baillou, one of the organisers of the event, said that it was a time of remembrance for the eight missing persons - Monique Munnings, Henilee Mackey, Havard Bevans, Clarence Jones, Roswell Pinder, his wife Sybil Pinder, and their daughter Tanae Pinder, all of High Rock, and George Laing, of McLean’s Town – who have not been seen since the storm on September 3.

Pastor Baillou said that the East End community is still going through the healing process in the aftermath of the ordeal.

“It is a process that everybody is going through, and we are hoping to see our loved ones again. But in all things, we give thanks to God,” he said.

“After the service, we threw a wreath where all had gone in the water. It symbolised the love, hope, and light that they had given to the community, and we hope to see them again on the other side of Jordan,” Pastor Baillou said.

Speaking of the missing, he said Henilee Mackey was a promising young lady who appeared on an early morning talk show on ZNS. Monique Munnings was an employee at Urban Renewal who helped many in the High Rock community, he said.

George Laing was a fisherman in McLean’s Town. Roswell Pinder was a well-known insurance agent for many years, and his wife, Sybil, worked for a Brokerage firm on the island. Clarence Jones was a former teacher and avid sportsman.

As the communities in East Grand Bahama cope with loss of missing loved ones, Pastor Baillou said they are also trying to restore life and hope back in their communities that were devastated by the storm.

The ceremony coincided with