STATESIDE: Just another year - or was it? 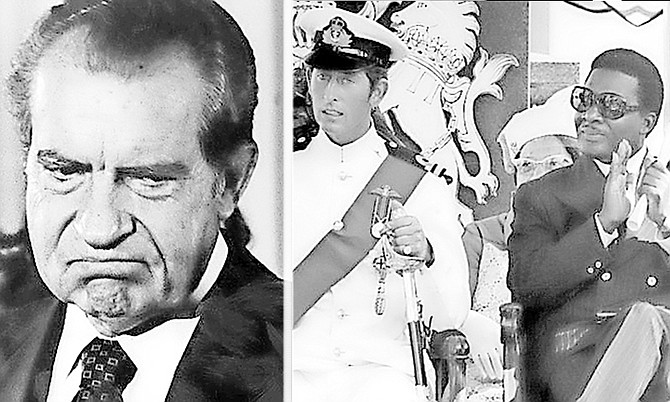 1973 was an interesting year, one that enjoys particular relevance in a number of different ways as we begin to anticipate Christmas and the end of the year of Dorian. Here are some highlights:

January 1: The United Kingdom of Great Britain and Northern Ireland, and the Republic of Ireland both joined the precursor of today’s European Union – from which Britain continues to struggle today to extricate itself.

January 14: the Miami Dolphins completed what remains the only undefeated season in NFL history by defeating Washington 14-7 to win the Super Bowl VII. The Fins won again the next year, but not since then.

January 20: Richard M Nixon was sworn into office as President of the United States. He is still the only person sworn in for two terms as vice president and two terms as president. His departure from office the following year under the cloud of the Watergate scandal still offers the best template aside from next year’s election for America to rid itself of its current chief executive.

January 22: the US Supreme Court handed down its decision in Roe v Wade, legalising abortion in the US. This verdict still energizes social conservatives like no other.

January 27: the signing of the Paris Peace Accords ends American involvement in the Vietnam War. Within two months, the last US soldier departs Vietnam. The US remains deeply conflicted about what this war, and the American defeat, means for its present and future role in the world.

February 22: the US and China set in motion the process to establish formal diplomatic relations. China’s path to world predominance eases significantly.

We just all switched from Daylight Savings Time to Eastern Standard Time, just like we do on the first Sunday in November every year. Spring forward, on the second Sunday in March, and then fall back. This is something we’ve all been accustomed to for, in some places, over 100 years. But why do we do it?

Intermittent surveys in the US show most people believe Daylight Savings Time was inaugurated to assist farmers at harvest. But that is not true. The real reason was apparently to save energy, but according to the Washington Post, current research has revealed that Daylight Time has resulted in little or no energy savings.

Anyhow, in today’s energy-independent America, who cares anyway about energy savings? There is scant evidence that this is currently high on many agendas.

But what are other effects of Daylight Time? Research shows the incidence of heart attacks increases on the day after the clocks spring forward, since those vulnerable to blood clotting rise earlier on that second March Monday. Apparently auto crashes also occur more frequently on that day, because drivers have had one less hour of sleep.

Academics known as circadian biologists study other effects on humans from Daylight Savings Time. The Post reports that “disruptions to the body clock have been linked to obesity, depression, diabetes, heart and other problems.”

Despite all of this, only Hawaii and most of Arizona have chosen to remain on standard time all year, though American federal law permits any state to do so.

Elsewhere, two billion people continue to live under Daylight Savings Time mostly, it seems, because it’s all they’ve ever known.

Klopp most likely to give Pep a run for his money

Across the pond in the English Premier League, expected form has largely held through the first third of the 2019-20 season. Liverpool, the defending European Champions League titlists, have raced out to a significant early lead and are heavy favourites to win the EPL title for the first time since the league was launched in its present format in 1992.

While the Reds have won lots of trophies in the past three decades, the EPL crown has eluded them. But under manager Juergen Klopp, the 52-year-old former German star player who moved to England in 2015 after leading Borussia Dortmund to unprecedented success in the German Bundesliga, Liverpool now look like the best team in the world.

After pretty comfortably defeating current top rival Manchester City on Sunday 3-1, Liverpool have an eight-point lead at the top of the table over Leicester City and Chelsea. Leicester are led by Brendan Rodgers, the man Klopp replaced at Liverpool, and Chelsea by all-time scoring leader Frank Lampard.

Rodgers, who managed Scottish champion Celtic to several titles after he was sacked at Liverpool, is the likeliest manager of the year in the EPL. Inheriting a talented but undisciplined Leicester team and teaching it to win again, Rodgers has pushed all the right buttons so far and oversees a prolific offence.

Lampard, a hugely popular figure in west London, is in only his second year as a club manager after spending last year at Derby County, but he has handled the team like a veteran of 20 years. He has turned the team over to its youth, and the results have been most gratifying so far. Special applause is due for Lampard’s handling of the best current American soccer player, Christian Pulisic, whose cautious introduction to the EPL’s rough, physical style of play has produced great results.

Neither Leicester nor Chelsea seem to be a serious threat to win the EPL title this year, but both have nonetheless been league champions, with different personnel and management, since Klopp took over at Liverpool. The favourite to offer the stiffest challenge to the Reds remains manager Pep Guardiola’s Manchester City, probably the world’s second-best team in a season when no likely alternative is likely to emerge from the Spanish, Italian or German top leagues and the French and Dutch leagues are dominated by single teams who face little domestic competition.

Oakland the surprise team so far

We’ve passed the midpoint in the 2019 NFL season. What have we learned?

The Dolphins are going to have competition for the first pick in next year’s draft. No longer winless and riding a two-game winning streak, the Fins have slipped “ahead” of the winless Cincinnati Bengals and one-win Washington Redskins for the dubious but often valuable honour of choosing first in April’s draft. The Jets and Giants are keeping pace with two wins apiece, and Miami will play each of them, and Cincinnati, down the stretch.

The vote here for biggest pleasant surprise so far goes to coach Jon Gruden and the Oakland Raiders, now 5-4 and just a half game behind Kansas City in the AFC West and in their last Bay area season prior to relocating to Las Vegas next year. Gruden and GM Mike Mayock, previously best known as an NFL network talking head on the network’s annual draft coverage, may be a lot smarter than we thought.

The aforementioned Jets may be the worst of several disappointing teams, after an offseason of gaudy signings like Le’veon Bell and C.J. Mosley. The Jets have suffered some critical injuries, but they don’t look like a very good team. Others from whom more was expected include the Atlanta Falcons, Los Angeles Rams, Denver Broncos, and the Chicago Bears. The Broncos and Bears stout defenses must especially want a change at quarterback from ineffective current starters.

Riding high at the top of the standings are the New England Patriots in the AFC and the San Francisco 49ers in the NFC, both led by QBs drafted by Bill Belichick. And both are anchored by spectacularly efficient defences. These front runners will need to be wary of challengers Baltimore, Houston and Kansas City in the AFC and New Orleans, Green Bay, Seattle, Minnesota, Philadelphia and perhaps even Dallas in the much stronger NFC.