Stateside: Remember The Tortoise And The Hare - Biden Could Still Win This Race 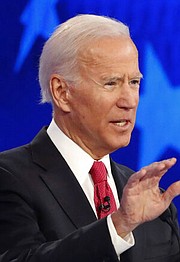 You’re watching the presidential impeachment hearings in Washington DC, aren’t you? This is history in the making, right before your eyes. If you missed the televised Watergate hearings, the impeachment of President Richard Nixon and his being forced from office 45 years ago, this is your chance to make up for that and get in on the fun.

Can’t be bothered? It’s actually understandable. Despite all the high drama of the impeachment hearings, any House impeachment action likely won’t result in a conviction in the Senate and removal from office of the US president.

How about the Democratic debate last night? Were you tuned in? Has plucky insurgent South Bend, Indiana mayor Pete Buttigieg captured your imagination? Do you believe that an articulate, sensible politician who almost certainly couldn’t win an office in his home state outside the liberal college town he currently leads, could possibly win his party’s nomination for President of the United States? And if by some chance he did, would he have any chance against the current president?

Is the Democratic Party being taken over by ultra-liberals and ardent lefties who advocate many policies that are avowedly socialistic? Are Vermont Senator Bernie Sanders and his Massachusetts colleague Elizabeth Warren the true representatives of today’s Democrats? Will one of them get the nod next summer to lead the party to what many political observers feel would be certain defeat in a still significantly conservative America?

It says here that the big winner from all the big noise surrounding the ongoing impeachment hearings in the House of Representatives and the significantly smaller noise emanating from the monthly Democratic candidate debates is ... Joe Biden.

However well or poorly he performs in the debates, Biden seems to be mostly avoiding putting himself in the headlines as he campaigns for the third time for his party’s presidential nomination. Like a smart marathon runner, he is certainly keeping his rivals at close range in the polls while maintaining a steady appeal to middle of the road American voters.

Biden’s name surfaces constantly in the impeachment hearings. It is obvious and consistently reinforced by the Republicans on Capitol Hill that President Trump has long believed the greatest threat to his re-election is the former Delaware senator and vice president.

If you want to throw Trump out of office next year, taking a cue from the president about the best man to do so might not be the worst choice you could make.

For Biden, having your name mentioned in the context of rampant corruption in Ukraine might not be such a bad thing. Since even the witnesses the Republicans have called to testify have loudly reaffirmed that Joe Biden is a man of great integrity and noble personal character who would never have succumbed to corruption, the Republican obsession with him may garner some real sympathy and support for Joe.

“Anyone but Trump” was a futile rallying cry – among Republicans – three years ago when he brushed aside all those challengers in the GOP primaries in 2016.

“Anyone but Trump” will certainly underlie the Democratic convention next summer. Perhaps the delegates will conclude that Joe Biden is their best answer after all.

China and the United States have certainly had their moments. The world’s two largest economies have been embroiled in a testy trade tussle for several years now. While it is in the interest neither country to seriously damage the global economy to score points off each other, the nature of the disputes between the two giants and the personalities of their leaders seem to point to a lengthy standoff.

But as Sino-American relations have waxed and waned for the past half-century, one area of cooperation has consistently shone through.

Perhaps the most joyful result of US President Richard Nixon’s 1972 opening to China was the agreement to loan to American zoos some of China’s cutest exports.

Tuesday marked a bittersweet milestone in the long history of the panda loan programme. The third and last panda bear born in the National Zoo in Washington DC, Bei Bei, was crated and flown back to China as the only freight on a dedicated Boeing 777 FedEx plane with a huge panda image plastered to its fuselage.

Two American handlers accompanied Bei Bei on the 16-hour non-stop flight. He also had first-class meal service. On offer were 66 pounds of bamboo, two pounds of apples and pears, two bags of special panda biscuits and two pounds of cooked sweet potatoes. Hopefully the flight was not too onerous for the four-year-old.

Remaining behind in the capital of capitalism were Bei Bei’s parents, mom Mei Xiang and papa Tian Tian. These two have been in Washington since 2000, but their lease expires in less than 13 months, not long after the American general elections.

The National Zoo director told reporters “We’d like to keep the pandas for as long as we can, but China has the right to take them back.”

One thing is for certain. The US won’t deport these particular immigrants.

Brutality has an appeal in sport

It happened a week ago, but an incident at the end of one football game continues to resonate around the NFL and with its millions of fans.

Cleveland’s dominant defensive end Myles Garrett sacked the Steelers’ journeyman substitute quarterback, Mason Rudolph. As the players untangled, Rudolph apparently kicked out at Garrett’s groin and tried to pull off his helmet. Garrett replied by ripping off Rudolph’s helmet and, in front of a national TV audience, swung it at Rudolph’s head. Others intervened and have received suspensions from the league. Garrett was suspended “indefinitely”.

But Garrett’s singular act reinforced the growing suspicion that the NFL is an increasingly violence-prone league whose efforts to police its players’ behaviour on and off the field appear to be ever more ineffective. The NFL has for years dealt with domestic violence issues. Several current all-pro players have been charged with and/or suspended for assaulting women. Hall of Famer and current NFL network analyst Ray Lewis was once a person of significant interest in the murder of an Atlanta man. A Patriots tight end was convicted of homicide. And so on. The list of offenders seems endless.

And as we remember from last year’s NFC playoffs, the league still simply cannot figure out how to enforce its pass interference regulations as skilled, swift stars fistfight each other in the open field for possession of a long downfield pass. Offensive linemen are generally only penalised for holding if they grab a defender and literally throw him to the ground. Illegal and dangerous blocks seem to occur on every other kick-off return, to such a degree that there is reportedly consideration of eliminating the kick-off altogether.

In the immediate case, Garrett’s punishment will stay in force until the NFL decides the furore has subsided. But unlike so many of his partners in violence, Garrett appears to have interests in things like astrophysics and helping the underprivileged. He’s an unlikely villain. The fact that he is black and Rudolph, who is white and instigated the fracas but has received no suspension, is sure to be noticed eventually.

Several years ago, wags and pundits concerned about violence in and around the NFL were speculating that the league, despite its massive TV and gambling appeal and stubbornly loyal fan bases, might be heading for the oblivion that shrouded boxing for decades. And for the same reason: fundamental brutality.

Well, boxing is making somewhat of a comeback. And the NFL isn’t going away anytime soon. Mixed martial arts is still gaining in popularity. Pro-wrestling is flying high. Maybe there’s still a pretty healthy appetite for brutality, real or rehearsed, after all.