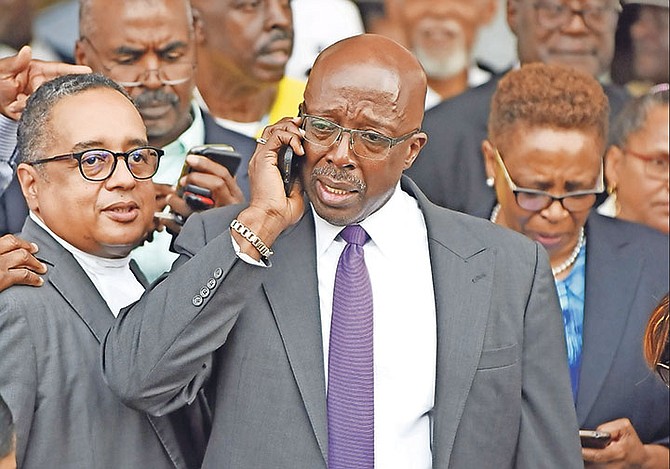 An emotional Shane Gibson along with his lawyers and supporters after being acquitted on all counts of bribery yesterday. Photo: Shawn Hanna/Tribune Staff

JURORS took under two hours to find Shane Gibson not guilty in a case his lawyers said was tainted with “wickedness” and “injustice” from the start. When the foreman revealed the acquittal on all counts of bribery, the former government minister cried. His lawyer arose in elation. His family and supporters in the gallery cheered.

The jury’s verdict was unanimous on 13 of the bribery counts. On two of them the verdict was eight to one in Mr Gibson’s favor.

More than two years after limping into a Magistrate’s Court to face charges of soliciting and accepting thousands from Jonathan Ash to expedite payments the contractor was owed, Mr Gibson walked out of the court free with no more case to answer.

“Nobody knows how many hours goes into something like this,” he said afterward about the trial, which lasted six weeks. “Every single day we left court, we went to the hotel and we met. We went over every single piece of evidence, every single piece of transcript, sometimes two, three, four and five o’clock in the morning my lawyer Mr Knight and Owen still up, working.”

Surrounded by supporters on Bank Lane, the former Golden Gates MP struck tones of triumph. He attacked by name the top political and law enforcement officials in the country, accusing them of perpetuating a “grave injustice” against him.

He left it up in the air whether he would seek to remedy the perceived wrongs through legal action, saying he will rely on his lawyers’ advice following a period of prayer, rest and celebration.

“In my heart, right now all sort of things are going through it, all sorts of emotions,” he said. “I’m going to speak much more to my future and more details about what actually transpired because as you know I didn’t take the stand because legally I didn’t have to. We thought their case was so weak I didn’t have to take the stand because we knew they couldn’t prove beyond reasonable doubt that I did what they said I did.”

Among those he thanked was pastor Bishop Neil Ellis, whom he said “took heavy criticism when the minute he heard about this he sent a letter defending me his member and as a member they were criticising him for doing that so I want to thank him for what people considered the chance he took on me, but it wasn’t a chance, he knew me. He’s known me for years and there’s nothing like a bishop who knows exactly what you’re capable of and not capable of.”

His lawyer Keith Knight had asked jurors to send a message with their verdict about how the justice system should work. He honed in on Assistant Superintendent Debra Thompson’s admission that she was wrong to meet with major players in the case to synchronise their statements. He attacked the credibility of Mr Ash and he repeatedly emphasised the absence from trial of Deborah Bastian, with whom the prosecution had alleged Mr Gibson was concerned on several of the charges.

Mr Knight told reporters the case was difficult because of the “injustice of the investigation”.

“If this case had been investigated in the normal legal way, no charge would have been brought against Shane Gibson,” he said. “And if, having discovered that the evidence was being polluted, the right steps were taken, then this case would never have reached this point. If there was a verdict in The Bahamas of innocent, they would have returned the verdict of innocent because I stand behind a client who in my heart, in my head and within my soul I feel is an innocent man.”

Mr Knight, who said he is a “friend of The Bahamas,” said he hopes to never see a case like this again. “Persons who are brought before the courts must be fairly brought and fairly treated and fairly judged,” he said. “He was not fairly brought.”

Mr Gibson is the second former Christie administration official to be acquitted of bribery charges in the last year. In the lead-up to the last general election, the Free National Movement promised to stamp out corruption.