Face To Face: He Aimed To Become A Judge - He Served As The Highest In The Land

SIR Michael Barnett is living proof that if you can see it, and if you believe it with all your heart, then you can achieve it. Lifetime goals are something to never give up on, despite any obstacles that may come your way. He stands as a testament to the fact that it is indeed possible. Now in his sixties, he is at the peak of his career and is still going strong.

He knew from a very early age that he wanted to be a judge. Yes, he was an island boy… and yes, he was one of nine children, but lofty dreams are not contained by circumstances. 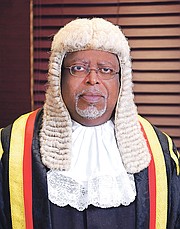 The execution of those dreams can break any barrier of the situation the dreamer may be in. In this case, Sir Michael not only served as Chief Justice of The Bahamas, he is currently sitting in the highest court in the land – the Court of Appeal.

During the years that I covered the crime and court beat as a reporter, I spent many a day in this court covering high-profile cases. I developed a high level of respect for the judiciary and I can understand why Sir Michael absolutely loves his calling.

“You ask the judge to help solve the problem you couldn’t solve on your own. That excites me about law. The law is designed to achieve fairness.

“As a judge, I have the ability to impact peoples’ lives and treat them fairly, and that is something that I enjoy. I always had aspirations to be a judge. I was more interested in being a judge than entering a political career.”

Prior to his appointment as Chief Justice, Sir Michael served as the Attorney General and Minister of Legal Affairs of The Bahamas (2008–2009). He has also served as Acting Stipendiary and Circuit Magistrate (1985–1988). A former president of The Bahamas Bar Association (1989–1991), Sir Michael has also served that organisation in the roles of Registrar of Examinations (1980–1985) and Examiner, Law of Civil Procedures (1985–1990).

It seems as if adjudicating is just in his nature. Even when he was a young boy, he was an avid sports enthusiast and would often be the one to keep score at games.

His discipline and determination was likely honed by his parents.  Arthur Barnett comes from a Jamaican family who migrated to The Bahamas. He was the only one of his siblings to be born in The Bahamas, and he applied himself well throughout life and rose to the position of an esteemed Family Island Commissioner.

He fell in love with and married Beryl Russell, who is descended from the Hanna, Heastie, Tynes lineage that I covered in a previous column. Arthur and Beryl raised nine children together, the second being Michael, who was born August 1, 1954.

With his father serving as a commissioner and his mother working in the public education system as a mathematics teacher, Michael and his siblings did quite a bit of moving around the Family Islands.

Although he was born in Nassau, he had the privilege of spending formative years in settlements like Rock Sound, Eleuthera; Mangrove Cay, Andros; and Alice Town, Bimini.

Sir Michael Barnett with St Augustines Alumni Association member Jannifer Thurston as he is set to be honoured with the Lighthouse Lifetime Achievement Award on October 26 at the British Colonial Hilton Hotel.

I say privilege, because often we hear of Bahamians growing up in Nassau or in one settlement on a Family Island. This well-rounded experience was beneficial for the young Michael. In addition to enjoying all the childhood island activities such as picking native fruits and long beaching days, he developed lifetime bonds with people in the settlement considering the Barnetts as family. To this day, Sir Michael has visited almost every major Bahamian island and has a passion for this country.

When he returned to New Providence for schooling, he and his elder sister Ann lived with their maternal grandmother at first, until his father came to the capital to work for the Ministry of Education as an accountant.

He then went on to St Augustine’s College, which was an all-boys school at the time. When he and his classmates were in form three, female students were brought into the SAC population from Xavier’s College. His class included the likes of Prime Minister Dr Hubert Minnis and former Face to Face interviewees Dr Rodney Smith and Fred Albury.

“I can’t ever remember not wanting to be a lawyer,” he said when asked what lit his spark.

“I always read a lot of Perry Mason novels. Before going into law, my father suggested I should go to USA and get a first degree in liberal arts. I celebrated my 16th birthday in Mt Pleasant, Michigan.”

He spent two years at University of Detroit before he transferred to Georgetown University in Washington, DC.  He graduated in May 1974 with a Bachelor’s degree in economics.

He recalls the difficulty he had fitting in with college mates: “I was intellectually capable of doing the work, but at that stage I was not as mature socially as others at university and that took away from a part of the experience.

“I wasn’t into partying or drugs or many of the things that the other students were into at the time, but I was heavily into sports and I enjoyed going to the games.

“Social development is an important part of college life. I wouldn’t recommend persons going away to college as young as I did.”

Sir Michael returned to Nassau and took a job at Deltec Bank. While at Deltec, he also took up evening classes with the Extramural Department of the University of the West Indies in Nassau. He took classes in Law of Contract and Company Law under the tutelage of former Justice of Appeal Emmanuel Osadebay, who passed away in August after well-noted contributions to the Bahamian judiciary.

“He helped to encourage me and stimulate my enthusiasm for law,” he says of Justice Osadebay, “And these two classes wet my appetite for law.”

It was 1975 and Michael had already been home for a year when he reached a critical juncture in life. His superiors at Deltec sat him down and gave him a proposal. They wanted to send him to New York City and to London to further his education. They let him know that he had the potential to one day run the bank. He decided to go home and sleep on it, and he also discussed the proposal with his father. He returned the next day to decline the benevolent offer. His heart was set on a legal career. It was then that a surprising event occurred. Michael was offered a full scholarship to study law.

“He was absolutely sure that I would be a successful lawyer and make an impact in society,” he recalls.

The young Michael took off for London to enter the Inns of Court.  He took the English Bar,  qualified as a Barrister from Lincoln’s Inn (Inns of Court Law School) and was called to the Bar of England and Wales in July of 1978. He came home and passed the Bahamas Bar on August 24, 1978 and was called to the Bahamas Bar. It was a proud day for him – his paternal grandmother’s birthday and three days after his 24th birthday.

He then trained under Sir Kendal Isaacs for five years and says of his mentor: “He was a very good lawyer. He was always prepared and his research was thorough. He was not always an eloquent speaker, but his skill was his preparedness. Very few issues were likely to come up that he had not considered.”

Sir Michael went on to become an highly regarded litigator, and the founding Partner of Litigation and Dispute Resolution practice of Graham Thompson, one of the country’s oldest and most prestigious law firms. He was a senior partner in Graham Thompson for 25 years.

His service includes leadership of public and not-for-profit boards, including the Industrial Relations Board (Chairman, 1993–1997) and the Water and Sewerage Corporation (Chairman, 1998–2002). From 1981 to 1989, he was the Chairman of the Catholic Board of Education. He was also a member of the Financial Services Advisory Committee to the Prime Minister of The Bahamas (1998–2000).

Throughout his professional life, Sir Michael has remained grounded by the love and support of his wife of 38 years, Lady Camille Barnett (nee Liverpool), his daughters (who are both attorneys) Viola Major and Michela Ellis, and his eight-year-old granddaughter Kamelia Ellis.

He will be honored by St Augustine’s College Alumni Association as the SAC Alumnus of the Year during the 2019 Lighthouse Awards and Gala on October 26. Prime Minister Dr Hubert Minnis claimed this award last year. The school’s alumni association will give out several other awards, with the lifetime award being the most prestigious.

One of the roles that Sir Michael is especially noted for, is that of mentor. Many accomplished Bahamian attorneys speak so highly and so appreciatively of his tutelage; his openness and his willingness to share his experiences and to impart the wisdom of such a full and illustrious career.

This article reads (sounds) like it was written by Michael. LOL