IN the aftermath of Hurricane Dorian, The Bahamas has received so much aid, assistance and support from such a wide variety of sources, both at home and from overseas, that it would be invidious to single out any particular ones as being more worthy than others. But, having learnt of the details of my own country’s involvement from the newly-arrived British High Commissioner, Sarah Dickson, who was responsible for coordinating the UK’s response, I should like to use this column to describe the ways Britain has contributed so far to the humanitarian relief effort. In a region of the world where hurricanes are all too common, this might be useful in learning lessons and preparing for the future.

In summary, Britain has committed up to 1.5 million pounds sterling ($1.8 million) towards the immediate humanitarian response. 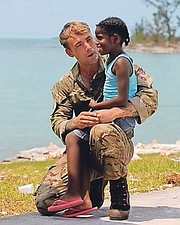 The Royal Fleet Auxiliary ship ‘Mounts Bay’ was pre-positioned in the region ahead of the hurricane season and was tracking Dorian’s path from this side of the Atlantic so was well placed to be the first ship of any nation to deliver immediate assistance and relief to Abaco. Using helicopters and landing craft, she carried out a range of tasks including search and rescue, casualty management and the clearance of debris to reopen roads while also delivering food, water, medical equipment and a variety of other supplies. The figures are remarkable – 3,000 ration packs, nearly 100 tonnes of water, some 900 emergency shelter kits and 1,000 hygiene kits. 7,100 kilograms of aid was delivered by helicopter, chalking up over 42 hours of flying time.

In addition, a helicopter was deployed from the British overseas territory of the Cayman Islands to bring in supplies and equipment and to transport helpers, including RBDF personnel, and to evacuate casualties; and a Royal Navy vessel delivered 38 tonnes of relief supplies donated by Bermuda.

In Nassau, a UK cross-government team was rapidly assembled from British diplomatic missions in the wider region and was coordinated by the new High Commissioner. A team from the Department for International Development in London was also deployed and will be working in support of the Bahamas Government and alongside bodies like the Caribbean Disaster Emergency Management Agency in assessing damage and helping to direct aid to where it is most needed.

The High Commission is working closely with other countries like the US and Canada and various non-governmental organisations. Since the UK is the only EU nation with a resident diplomatic mission in The Bahamas, teams from the Foreign and Commonwealth Office have been supporting EU nationals as well as British citizens who have been affected by Dorian.

Speaking personally as an observer who was not involved on the ground, it looks to me that this British involvement in search and rescue operations and the provision of support and assistance for recovery and relief work has made a strong contribution to the overall humanitarian operation. It has been an impressive effort carried out in difficult, challenging and distressing conditions and it reflects well on all concerned. What is more, I hope that such assistance from Britain will always be available to The Bahamas in the event of any similar major natural disaster in the future.

Time for new ideas as tourism bounces back after Dorian

Such is the nature of modern communications that news of a significant event in any country can be beamed instantaneously around the world. If a particular happening captures the interest of a news editor, at the press of a button it can receive global media attention.

In the case of Dorian, it is likely that the wide international interest and concern was in response initially to the terrible televised images of what appeared to be the total destruction of the shanty towns in Marsh Harbour, together with the other widespread damage there and in various parts of Abaco including Treasure Cay and the neighbouring islands. Pictures of flooding and devastation in Grand Bahama then added further evidence of a major disaster.

Inevitably, such videos of wholesale devastation led people around the world to conclude that the Bahamas as a whole had been damaged or at least affected by Dorian. But perhaps that is not surprising since, apart from those familiar with the region, many outsiders will know little about the Bahamian archipelago and how it is spread out over some 500 miles from the north to the south east, covering 100,000 square miles. So, despite being informed that it was the islands of Grand Bahama and Abaco that had each taken a direct hit, viewers from faraway countries of the video footage will have been unaware that they are around 100 miles from the most heavily populated island of New Providence and the nation’s capital. On a personal note, my wife and I even received emails and telephone calls from family and friends concerned about our welfare who had visited us before but seemed somehow to have lost sight of the geography.

Thus, the perception overseas was that the whole of The Bahamas had been severely damaged and one result is likely to be less visitors. The Minister of Tourism has been quoted as saying that already there has been a double digit decrease in forward visitor bookings since Dorian and that some hotels are suffering a 20 to 40 per cent fall-off.

He acknowledged this was normal after a storm of such severity and that, of course, visitors would not be able to come to Grand Bahama or Abaco during the recovery period. But it was important, he said, to arrest the decrease by “getting the message out that 14 of the 16 islands (apparently designated as main tourist destinations) are unscathed and open for business”, as well as showing people that Bahamian tourism was resilient and would bounce back quickly.

In such circumstances, I wonder whether I might revert to an old hobbyhorse of mine; namely, the relatively low numbers of visitors from Europe compared to the US and Canada.

The problem as far as the UK is concerned is the widespread perception that this country is too expensive and so the individual on an average income prefers Jamaica, Barbados and, in particular, the Dominican Republic which are considered to be better value for money. Nonetheless, with innovations like the growing home vacation rental sector, I believe that more attention should be paid to the potentially lucrative UK market.

After a nine-hour flight, visitors from Europe are likely to stay longer and spend more money than short-term visitors from the US. Perhaps there should be a new approach by the Ministry of Tourism to the marketing of this country’s tourism product in Europe – particularly in Britain -- rather than concentrating so much on North America where, as I understand it, Atlantis, for example, already does its own advertising.

I wrote last week about the threat of a constitutional crisis as the UK Supreme Court was poised to rule on the legality of the Prime Minister’s decision to prorogue or suspend the Westminster Parliament for a period of five weeks. This was longer than the usual period at this time of year to allow MPs to prepare for and attend their party conferences and his critics maintained that he did so to stymie debate about Brexit. It is now clear that his action was unwise, if not politically inept.

Such matters of constitutional law may normally be of little interest to readers. But what happened last week in Britain was so significant that it is hard to ignore it.

There was a general expectation that an earlier ruling on the issue by the High Court in London that this was a purely political matter – and, as such, was not for judges to decide since it was none of their business – would be upheld. However, in its ruling the Supreme Court, as the highest legal authority in the land, stated categorically that the matter was ‘justiciable’ and found that the prorogation was unlawful, void and of no effect. Parliament therefore resumed its sitting the next day.

Predictably, this ruling has provoked outrage. One does not have to be a practising constitutional lawyer to realise that the Supreme Court has made new law by handing down such a verdict. It has set off a fiery debate amidst claims its decision was based on vague, abstract principles rather than on statute or precedent. Some say these judges have strayed too far into the political arena and their ruling was based on their subjective view so that, in effect, unaccountable judges are placing themselves in such matters above elected politicians, including the Prime Minister. It opens the way for them to strike down other government action.

It is also contended that such a ruling evades Britain’s Bill of Rights of 1689 which declares that ‘proceedings in Parliament ought not to be impeached or questioned in any Court’. In other words the courts are forbidden to interfere with Parliament, but somehow the Supreme Court in this case found that the prorogation was not ‘a proceeding of Parliament’.

When, ten years ago, the Supreme Court replaced the old court of appeal which was a committee of senior law lords, there were fears that its judges would arrogate to themselves greater powers than would be consistent with Britain’s established system of the Crown in Parliament being supreme in the nation’s unwritten constitution. In Britain, the separation of powers is well established – Parliament makes the laws, the courts apply them and the executive governs while at the same time being accountable to Parliament. In a democracy governments are in reality answerable to the electorate as well.

The debate about such a controversial matter will be endless. It was disingenuous of the Supreme Court to maintain the issue is not about Brexit when, clearly, it is everything to do with it. This intervention by the court has plunged Westminster into further chaos. The Prime Minister’s call for an election has been blocked by the House of Commons and the need to secure a deal with the EU has become even more urgent.

These are dangerously uncertain, even perilous, times for Britain’s body politic.

"But, having learnt of the details of my own country’s involvement from the newly-arrived British High Commissioner, Sarah Dickson, who was responsible for coordinating the UK’s response, I should like to use this column to describe the ways Britain has contributed so far to the humanitarian relief effort."

Young's reference to the UK as his own country has me in stitches. This old fart has been hiding out in The Bahamas for decades to avoid paying hefty taxes to the UK government. But when a major category 5+ hurricane like Dorian hits New Providence Island we can all be rest assured Young will evacuate The Bahamas for the UK faster than a bolt of lightning. LMAO